Reid Admits Mistake On Vick Fumble Before The Half 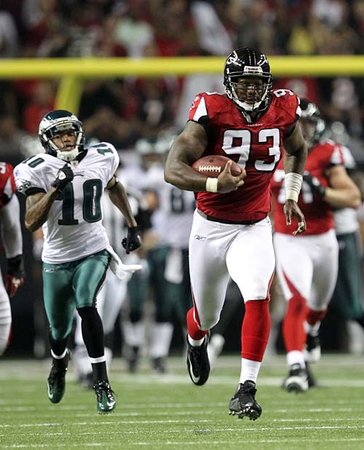 The Eagles were leading 10-7 and they had a first and goal on the Atlanta four-yard line. Michael Vick had just scrambled for a first down and there was just over two-minutes to go in the first half.

A score would have forced the Falcons to come out in the second half and be forced to play catch up because they would have been down two scores.

Most of the time, both the offense and defense get the chance to play at least 60 plays. Out of those more than 120 plays, a play or two will have a huge affect on who wins the game. This third and goal play turned the game around. it was a huge turnover.

The Eagles ran a tackle trap. They’ve had success in the past of trapping defensive tackles on quick traps and shuffle passes to get into the end zone.

Atlanta defensive tackle Peria Jerry got off the ball and penetrated on the snap of the ball. Jason Peters took off from his position on the left side of the line. He had a further distance to go than Jerry. The nose tackle and his helmet arrived at the point of attack well before Peters and Jerry put his helmet in the back of Michael Vick which forced him to fumble.

The Eagles thought they could have influenced Jerry and delayed his arrival in the backfield with Vick’s fake of quick pitch. The defensive lineman didn’t take the fake.

Falcons defensive end Ray Edwards picked the ball up and took it all the way down to the twenty-four yard line of the Eagles. They went into score a few plays later and that meant the Falcons went into the locker room at halftime with a 14-10 lead rather than the Eagles going in with a 17-7 lead. That was a huge play.

Reid admitted moments ago at his Monday afternoon session with the media that the problem with that play wasn’t the players doing their job, it was the design of the play.

I thought when it happened that the tackle trap was a bad play call because they were asking Jason Peters to come from too far away to get to a defensive tackle who was attacking upfield on the snap of the ball.

Reid said he should have trapped another player who was closer to Peters rather than the nose tackle, who was too far away. I also noticed that the Falcons defensive line shifted before that play.

Of course on the play following the turnover, Matt Ryan threw the ball to a wide open Tony Gonzalez who had slipped in back of Kurt Coleman in the Eagles zone coverage. That play took the Falcons inside the ten yard line.

Birds Pass Rush Pummels Ryan, But Not When It Was Needed Most