No Reason To Get Alarmed Over Phil’s Struggles 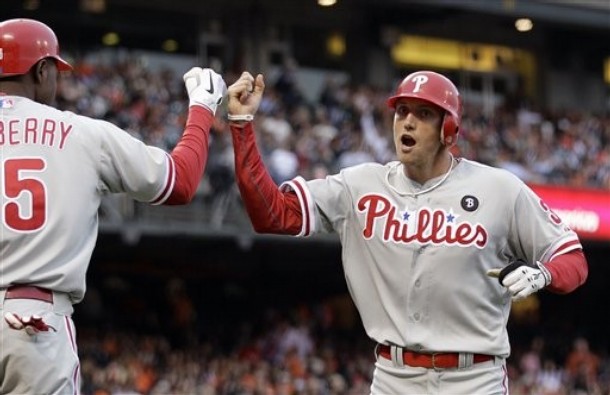 After clinching the National League East and home field advantage throughout the playoffs, the Phillies have fallen into a bit of lull. They are 4-6 in their last 10 games, and have lost five of their last six. In each of those five losses, the offense has failed to score more than three runs. The starting pitching hasn’t been quite as sharp as it has been all season, and some of the bullpen arms like Antonio Bastardo look worn out from a long season.

Then comes the news that outfielder Hunter Pence would have a precautionary MRI on his knee to examine his patella tendinitis, causing a brief outbreak of panic amongst those hopeful that the Phillies will bring home another World Series title.

At the end of the day however, there’s very little reason for concern.

The games that are being played from now until the end of the season have very little meaning to this team. With every post season advantage possible already securely locked up, the remaining games are essentially nothing but glorified preseason games. Every series from now until October may as well be called an “On-Deck” series,  or what the Phillies refer to their final Spring Training games at Citizens Bank Park as before the real games get underway.

The only players with anything to gain from the final weeks are Roy Halladay and Cliff Lee, who are both candidates in the Cy-Young award race.

What about Pence’s knee? Again no reason for concern. Speaking about his knee, the former Astro said “Its going to be fine. It feels a lot better already.”

Pence has apparently played with the injury all season. “I’ve had it forever, it just flared up a little. There’s a difference between pain and being injured. Pain is something you deal with.”

If there is one legitimate concern, its the bullpen. Antonio Bastardo has been terrific most of the season, but seems to have hit a wall in recent weeks. The Phillies are trying to get him some rest, he hasn’t pitched since September 16th. Mike Stutes hit his wall over a month ago, and hasn’t been able to get back on track since. Since August 7th, his ERA has risen from 3.02 to 3.88. Its hard to imagine the Phillies trusting Stutes in the playoffs.

If the Phillies were the Boston Red Sox, it would be appropriate to panic. Boston was widely considered to be a lock to make the playoffs for much of the season, but they’ve fallen into a terrible slump, losing 16 of their last 22 games, and now hold just a two game lead over the Tampa Bay Rays for the A.L. Wild Card spot. The Phillies may be struggling now, but many of the problems seen now are easily correctable, and will be ironed out in time for the NLDS.

Jenkins Is Docked $15 Grand For Hit, Could Play DE This Week

Maclin: “A lot of times people talk, they’re either insecure or scared”

I always hate to see a team go on ‘cruise control” at the end of the season when they have dominated all season long, It’s hard to crank it back up after lifting off the pedal.. Take a look at recent teams that dominated their division during the regualr season and got bounced right out of the playoffs..
The Cubs,Braves,Mariners,Angels,Yankees all come to mind in recent seasons..
In football, look at the INdy Colts, who typically have their playoff spot all wrapped up by early December, then go on cruise control only to lost that intensity come playoff time..
It seems that teams that have to scrap and claw their way just to make the post-season have more success.. maybe it’s Karma and and getting far by winning things the hard way, but this Phillie team has tons of proven Veterans so it should be not an issue, but you never know..
A few things I do know
#1) Victorino and Utley, Batting Averages have slumped a good .15 points over the last few weeks.
#2) Stutes,Bastardo and Madson have all struggled over the last month

On the plus side, Players have been able to rest and get healthy ..
Lidge has been effective since returning, Worley and Kendrick should be avaialble out of the Bullpen once Playoff Rosters are established..and of course the Phils Top 3 (Hallady,Lee & Hamels) should lead the way and give the Phils a great chance to win every time out..

They better get their heads out of their @$$e$, these last 7 games!! This is eerily similar to what the Flyers did, at the end of last season! They gotta be going inot the playoffs banging on all cylinders!

This ain’t making me happy. WTF, are they doing!? Are they in a coma!?

right now i have more confidence inthe eagles o-line and linebackers than i do in the phils offense!

How about now…
IF the Cardinals sneak in past the Braves, they would be the Phils Opening Round opponent and the Cardinals have been the Hottest Team in the NAtional League for the month of September and would be coming in a on major roll and will not be intimidated to come and play the Phils..

paulman, you can’t compare baseball to football, there are two seasons in baseball, not football, the hot team at the end of regular season, which usually isn’t the eagles, thanks to reid;s high wire act that dont play in december, is the team that makes the best run in playoffs, no tso in baseball, phils are on cruise control, will turn it on

I disagree, regardless of whater the Overall Regular Season records ends up , It’s how you finish your season that to me determines hoe much success a team will have come playoff time regardless of what Sport.. Give me the hot team the last month of the Season and that’s who I don’t want to face.. Come next week, what a team did in May,June or July is irreleavant.. Julit like in Football, Hockey, PRo and COllege Baskeball and the Phisl have played pretty poorly over the final month of the Season and have had key contributors in the Bullpen really struggle the final 6 weeks of the Season..
You just can’t turn it back on.. Bastardo and Stutes look toasted to me