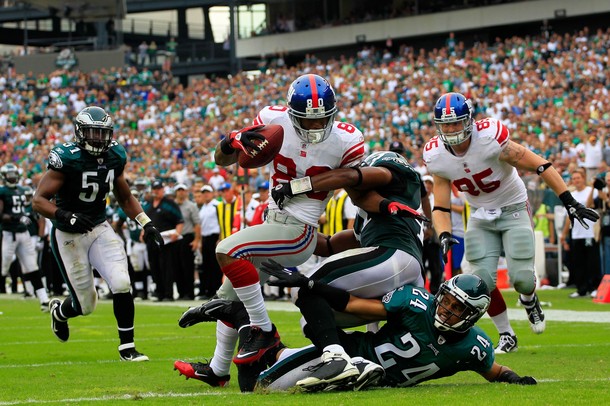 Calling defensive fronts and coverages, along with blitzes isn’t an easy thing to do. Most of the coaches who are doing it have been prepared for it through years of preparation.

From the start Gilbride knew where to attack Castillo and the Eagles.

On the first drive of the game, he had second-year wide receiver Victor Cruz open deep behind Asante Samuel and Jarrad Page, but Eli Manning missed him.

You run double moves on Samuel because he’s very good at jumping routes, so you show him a curl route, let him bite on it and then you take off deep. Cruz got behind the safety Page because he runs like his feet are in cement always works.

Last week, Dominique Rodgers-Cromartie had to run around the slow-footed Page to catch the Falcons Michael

On the second drive of the game, when the Giants offense got to the Eagles 40-yard line, they went after rookie linebacker Casey Matthews. They lined up Brandon Jacobs at halfback and sent him out on a route.

There was a reason that Jacobs was the guy to run this route. Gilbride didn’t use Ahmad Bradshaw, who is a much better receiver than Jacobs, on this route because he didn’t want the Eagles to give the linebacker any help.

They lined up everybody on the right side and had the one wide receiver on the left side go to the ride on the snap of the ball. They wanted to get Jacobs matched with Matthews one-on-one. It was like taking candy from a baby when Matthews took a step forward with his eyes on Manning.

Jacobs caught the ball in stride and went into the end zone untouched.

The next time the Giants got the ball, they were on their own 26-yard line with a 3rd down and three. Gilbride knew Castillo was going to blitz and he was waiting on it.

He had Cruz run a stop route outside at about eight yards down field. The Giants knew Eagles safety Kurt Coleman would have to come over and Cruz with the nickel back blitzing. They had the other wide receiver run an inside route directly at Coleman to make sure he couldn’t get over there in time.

Cruz caught the football and broke Coleman’s tackle, then he eluded Nmandi Asomugha, who then collided with Coleman and Cruz outran the rest of the Giants to the end zone for a 74-yard touchdown.

It was still the first quarter and the Giants had put up 14 points with two big plays that were brilliantly designed by New York’s offensive coordinator.

The third touchdown pass for the Giants was a display of the confidence that Manning has gained in Cruz. He

threw the ball up from grabs with Asomugha and Page locked up on him man-to-man.

Asomugha showed while he has so few interceptions. He didn’t turn and play the ball despite having all the time in the world to do so. Cruz showed surprising strength as he went and took the ball from both of the defenders.

Asomugha had a terrible day because he was beaten by Hakeem Nicks on a post route, but Manning missed him because of pass rush pressure from Phillip Hunt.

On the final score of the day for the Giants, Manning dropped in the pocket to lure the Eagles pass rush to him, then he dumped the ball to Bradshaw who went untouched into the end zone. The Eagles swallowed

The pass play, which Gilbride called on the fourth down to tight end Travis Beckum was intended to be run against Matthews, but rookie linebacker Brian Rolle was in there instead. Beckum tripped and fell short of the first down marker, and was touched down by Rolle.

McCoy Carries The Eagles Offense With Big Day Against The Giants