Andy Reid And His Staff Were Outcoached On Sunday 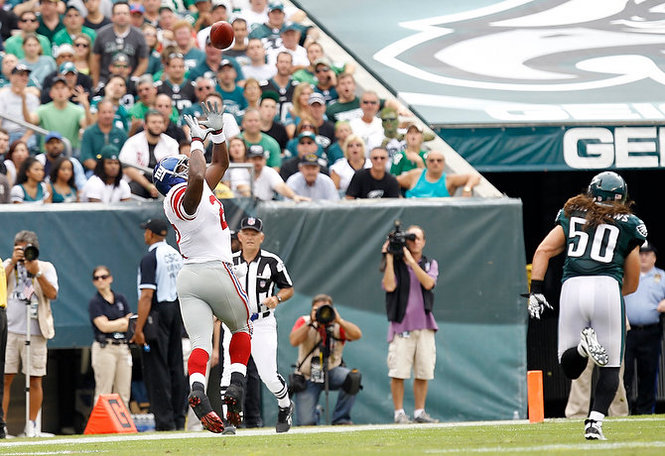 Considering our innate ability and eagerness in becoming Monday morning quarterbacks each week after our favorite teams lose, there are a lot of things that we can point to as causes of the Eagles fall to the Giants on Sunday.

The most obvious aspects to pull out would come from the action on the field, after all the Eagles secondary allowed big plays, Ahmad Bradshaw and Victor Cruz basically did whatever they wanted in the Giants 29-16 win over Philly.

Against Philadelphia on Sunday, the Giants seemed to have moments where they simply made the right call for certain situations; plays that yielded success not because so much of the ability of certain players, but more so, the position that the coaches put them in.

Tom Coughlin and his crew are far, from perfect but credit must be given where credit is due. It surely didn’t hurt them to have Andy Reid and his staff on the other sideline. The Giants picked on rookie linebacker Casey Matthews as soon as they could, getting Brandon Jacobs a nice 40-yard touchdown pass in the process.

Why were the Eagles surprised when the Giants ran a screen pass to Bradshaw on third down in the fourth quarter, a play on which the Eagles sent seven players after the quarterback?

Andy Reid, Juan Castillo and the rest of the staff, were caught sleeping at the wheel. While all the talk of Reid

deserving to be on the hot seat may be a little misguided, for this game specifically, there are questions to be asked of the coach with the longest tenure in the NFL, particularly when it came to the crucial, short yardage situations.

Going down the field on the first play after Mike Kafka came in (with a call that had DeSean Jackson running a double move which Aaron Ross didn’t bite on) wasn’t the wisest decision, and likewise the 4th and 1 hand-off to McCoy will not be receiving nominations for play of the year anytime soon. McCoy is typically not a power back.

There are a lot of things that will be said about Reid and offensive coordinator Marty Mornhinweg in the wake of Sunday’s loss, some dead on and perhaps some a little off base, but at the very least we can say that the red zone has never been one of Andy Reid’s biggest strengths and nothing may be able to illustrate this more than the Eagles

trip to the red zone late in the third quarter.

Let’s just revisit that series of plays, shall we. The Eagles ran the ball up the middle with full back Owen Schmitt, which gained a yard, no big deal, second down. A quarterback sneak ensues and Vick runs for no gain. But wait! There’s a penalty, which means two more chances to get this thing in there, hooray, second down again. Another quarterback sneak ran by an already hurt Vick, and oh boy, this is not looking good. The following sequence of events goes a little something like this: Third down, Owen Schmitt, field goal, heads shake.

Now of course, whatever problems the Eagles have do not come down to just four plays. It comes down to a laundry list of factors, that’s for sure. On the same same token, the failings in Eagles’ games may not even come down to a couple of moment, understood.

Consider this number however, six. That’s how many times the Eagles ran offensive plays inside the Giants 3-yard line on Sunday. None of those plays resulted in a touchdown. Poor red zone conversion rates, especially from that close of a range, are usually accompanied by losses. These losses are usually the avoidable type, the frustrating type, the kick yourself until you’re hurt type.

That being said, the Eagles play calling may not have been the biggest cause for defeat against the Giants, but it was definitely one of the problems, and one to take note of going forward.

JVR, Nodl and Schenn Nursing Injuries and Other Flyers News