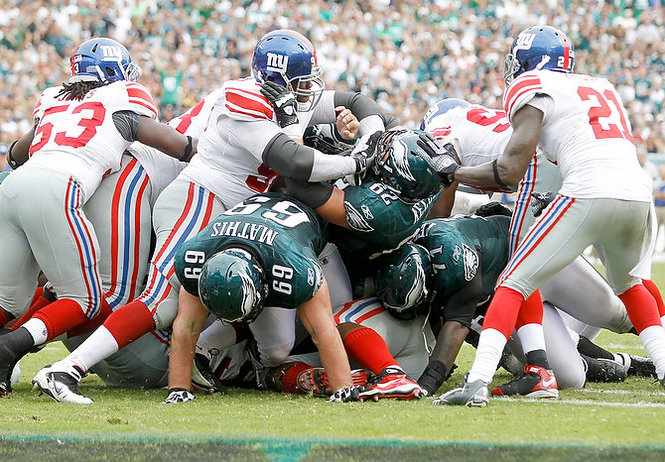 They’ve got a young rookie center, Jason Kelce, who is only 280-pounds. He’s a very athletic center, who is able to get out on screens and he has the speed to get outside and pull from his position. This youngster can lead ball carriers around the corner and pick off defenders in the process.

The young man is very good at getting positions on the nose tackles, when he’s out in the middle of the field, but he’s not nearly as capable of pushing the big 330-pound guys off the ball, when they’re intent blasting straight ahead. It’s not a shock to me that this isn’t his strength.

The fact that he’s only 280 pounds makes him a liability on short yardage and goalline, if you’re going run over him right up the middle.

The Eagles two guards aren’t massive either and blowing people off the ball isn’t their strengths. Left guard Evan

Mathis is 300 pounds and right guard Kyle DeVan is about 305.

On goalline the Giants put all of their big boys on the field and had them burrowing straight ahead on the snap of the ball. The Eagles center and guards were battling 320-pound Chris Canty, 323-pound Linval Joseph, 320-pound Jimmy Kennedy and 300-pound Rocky Bernard.

I gave you this information, so that you could understand why I’m wondering why the Eagles would run four goalline plays right up the middle when they know that the guys they have at the center and guard were at a

disadvantage size-wise. In addition, these guys aren’t very good at pushing the pile and blasting people off the line of scrimmage. Their strength is speed and mobility.

Not only were the Eagles center and guards not getting any push, they were getting pushed into the Eagles offensive backfield. Fullback Owen Schmitt could have scored on the first goalline play if he had been able to keep his balance better, but he’s a fullback because he’s not a good ball carrier.

On the second carry by Schmitt, he was hit three-yards into the backfield on the final short yardage play. The Giants penetration made the idea of running up the middle seem like a bad one.

They have the fastest quarterback in the league, Michael Vick, but they’ve got him running a quarterback sneak twice.

They’ve got one of the most elusive halfbacks in the league in LeSean McCoy, but he doesn’t even touch the ball. Running up the middle four times in a row made not sense at all. Maybe you fool them on the first play, but after that you’ve got to get outside or throw the ball. Getting outside on a pass or run option would have made the most sense.

Andy Reid And His Staff Were Outcoached On Sunday

Its Wed… Can we start getting some info on the coming game?. Much respect, but I’ve heard, read and talked enough about last weeks debacle.

This is why a I have a big question about whether WInston Justice is ready to play or not. Gary, do you have any info. on this? If Herremans was back on the left side that short yardage situation would have been pretty routine for a TD.

Andy Reid would have a better chance to win a Superbowl if he coached in a dome.

But his desire to have a pee-wee team is not East Coast Football. Look at the Steelers and the Ravens. Two successful East Coast franchises. They have MEN playing on their teams, not gimmick guys. Not wear down at the end of the year guys. Now the one part of the team that actually has had some size, has been added to the UNDERSIZED category.

Andy Reid is overweight. People less fortunate than him appear on “the biggest loser” each year and lose 100lbs or more. People magazine runs a special each year showing people who have also loss 100lbs. The reason some people attain a goal and others with more resources do not, is because of a powerful WHY. The people in People magazine have health scares, or reunions to attend. The people on biggest loser have being on TV and winning money, as well as health as their motivation.

Andy Reid has no powerful WHY. He gets to talk to the media and treat the fans of Philly anyway he wants and he keeps his job. If Lurie had publicly put Andy on the Hot seat, he would have more motivation than he has right now.

That’s why I KNOW he is NOT a championship coach. He creates his own problems. He self destructs. With 6 pro bowlers on defense this team should be lights out. Even with the perceived weakness at LB. I say perceived because Chaney stepped in last year and doubled the tackle output immeadiately. Instead of starting training camp where he left off, the COACHING STAFF, moved him. He was fine were he was. “BOZO the Clown, with no experience or common sense moved his best returning linebacker and decided to start a 4th rounder. Out of position mind you. Again, these are problems they created for themselves. Injurys did not force it.

That is why I critisize them. They did it. No one forced them to. And they are taking their sweet time admitting that they made a mistake. MAN UP. And you get the respect a Man deserves. Keep trying to pretend that you are smarter than everybody else and this season go’s right down the tubes. AGAIN.

13 years in a row. I’m sorry, but in the NFL 13 years is about 3 times the amount of time you are normally given. His formula does not, and never will work. Having a team that can only play with a big lead is ridiculous.

It’s time for the OVERSIZED COACH and UNDERSIZED TEAM, ERA to end.

Let’s get a guy who understands football fundamentals, and does not stay up at night trying to be special or different.

Instead of just trying to be good.

There is a big difference between the element of surprise and stupid. The offensive coaches love the gadgets and to runs plays trying to fool or surprise the defense. When there is a 1200 pound wall of Giants between the tackles, Lombardi’s Packers couldn’t execute a play to work over center. What happened to the play fakes we see at nauseium on passing downs and a roll out to allow Vick to walk in? I love the short up the middle shovel pass, but the Giants see it 2-3 times per year from the eagles for the last 6 years, it got stuffed. Did MM or AR take their face out of the play card and see the Giants front and adjust? This offense should be unstoppable inside the 10 with Vick and McCoy, yet it’s a big problem.

I’m starting to see Andy the same way I looked at McNabb.

I felt Donovan was intent on proving he was a passing quarterback after he made his bacon with his legs. That was the correct attitude to start with. Although I think McNabb would deliberatley not run and pass too often tp prove a point, willing to go down passing instead of doing anything necessary to win. Vick is willing to do anything to win which is why he is already more popular than McNabb.

Andy seems like he has to win on his terms and ignores some obvious problems that is clear to all the fans. He seems to be an amazing organizer and planner, but to bull headed to change on the fly. It will get him 8-11 wins per year, but Philly is looking for a Super Bowl.

Absolutely brilliant in many ways, yet in others, Andy Reid has the mind of a daffodil.

You’re preaching to the choir G, why don’t you put it in a letter and mail it to that idiot Jeff Lurie?

I feel like Jimmy. I’m ready to move on and talk about the upcoming game. Did my venting on Sunday, Monday and yesterday. Nothing else to really say about what they did or didn’t do last game. I just know Reid better have this thing fixed soon.

G,
the answer to all of your questions are easy, Reid & MoningWood, are morons, & do not know what the hell they are doing! When you have first & goal & QB sneak, your concussed QB twice & handoff to your FB twice, with a phenomenal RB in the backfield, you clearly are clueless & don’t deserve to have job! This entire coaching staff, is a cruel joke, & needs to b fired immediately!!!

The 49ers played last SUnday in CIncinnati and desided to stay in Youngstown Ohio for this week in preparing for the Eagles so they will not have to make that cross-country trip from the West Coast to the East Coast..
A couple of Matchups that concern me..
#1) 49ers TE Vernon Davis versus the Eagles LB and Safeties..(maybe this will be the game where the size and athleticism of DCR can be used to cover a gifted TE..(it’s not like he can do any worse than the LB & Safeties have been doing)
#2) RB Kendall Hunter who at 5’8″ – 200 lbs is hte 49ers 3rd Down back who will catch screens, run draws,etc,etc.. Built very low to the ground and reminds me a little of a young Brian Westbrook and has a knack of making players in the open field miss tackles (which again for the Eagles has been an issue)
#3) Return Man/WR – Ted Ginn Jr who many (myself included) wrote off after a poor start to his NFL career a few years back with th Dolphins.. He’s finally healthy and has flowurished so far with the new 49er Coaching Staff who have set aside some plays for him, on screeens,bubble routes,reverses and he is extremely dangerous on the Kick-off/Punt Return… He will be fired up to play well and is playing for a big contract and will look at this game as wanting to outplay D-Jax of the Eagles..This is not the old Ted Ginn and the Eagles better stop this guy in his tracks before he gets going for his is the 49ers only true big-play maker and they need to take him out of the game..

BSMVideos, your excerpt should be on the cover of every magazine that covers football in the country. At last, somebody completely and concisely explains who Reid is and what he does (or doesn’t ) do. Every Reid apologist should be forced in front of knowledgable football people to argue against your points and defend Reid. After watching the NFL network show on Reggie White and Jerome Brown, I anxiously await the end of the Reid era. My statement from this point on is ” thank you coach Reid….. GOODBYE!!!!”