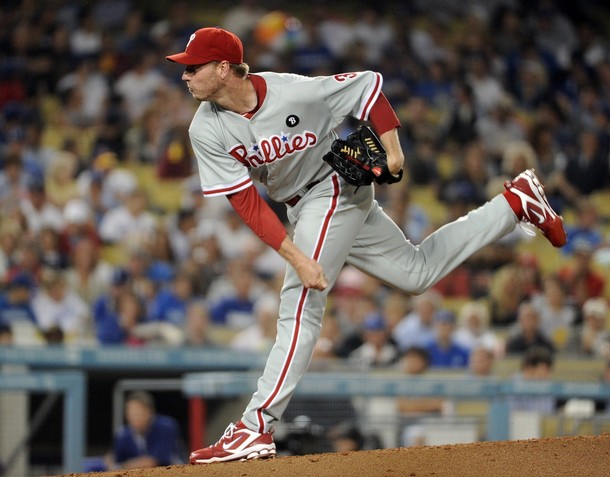 Game 1 of the NLDS between the Phillies and Cardinals will get underway at 5:00 p.m. today, with Roy Halladay on the mound for the first pitch and Kyle Loshe will take the hill for St. Louis.

Halladay has put together another superb season in his second year with the Phillies, posting a 19-6 record with a 2.35 ERA. However, there has been noticeable weakness in the righthander’s game this season. He’s allowed teams to score runs on him in the early innings. The former Cy-Young Award winner has allowed teams to get hits early, and a number of times has put the team behind by a run or two to start games.

Halladay has an ERA of 3.66 in the first inning. Leadoff hitters are batting an astounding .452 off of him. Its been a recurring trend throughout the season that has to stop now that the playoffs are here.

The good news is that while Halladay hasn’t been on top of his game in the early innings, he’s been an incredibly strong finisher. His ERA average in innings two through eight is below 1.75, with opponents hitting less than .230 off of him after the third inning. If the righthander gets off to a strong start, its going to bode very well for the Phillies chances. If he isn’t sharp from the start, the Phillies may face an uphill climb to win Game 1.

Cardinals starter Kyle Lohse put together a nice season for St. Louis. He”s 14-8 with a 3.38 ERA. He’s faced the Phillies twice this season, and is 1-1 with a 1.76 ERA, allowing just three earned runs in 15 innings. He has three career postseason appearances, and has pitched no more than five innings in any of his efforts.

Another thing to note for this game is that two of the key pieces for the Cardinals (outfielder Matt Holliday and shortstop Rafeal Furcal) will not be available for this game. Holliday is out with an inflamed tendon in his right hand, and Furcal has a hamstring injury.  This significantly hurts the Cardinal lineup, robbing them of their leadoff hitter and one of their top sluggers. Holliday hit .296 with 22 homeruns and 75 RBIs.

Vick And Eagles Offense Must Stay Away From Turnovers