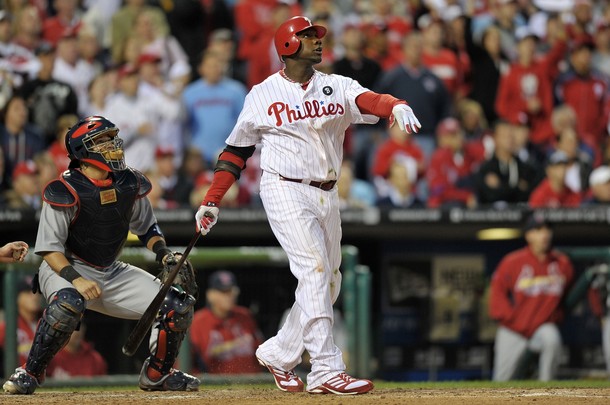 The Phillies have picked up their first win of the postseason, taking down the St. Louis Cardinals 11-6.

The NLDS got off to a sour start for the Phillies, as Roy Halladay opened the playoffs by putting his team in a 3-0 hole after the first inning. In my preview article, I discussed how Halladay had been having issues starting games strong, and unfortunately that trend continued in Game 1. Luckily, the righthander rebounded from his terrible first inning to retire the final 21 batters he faced. His final line for the game was eight innings pitched, three runs allowed on three hits, one walk and eight strikeouts.

Since the game ended, I’ve heard plenty of people talk about how Halladay pitched a great game. I disagree with that school of thought. He was good, not great tonight. Retiring the final 21 batters is certainly an impressive feat, however for him to come out and put the team into an instant 3-0 hole was disturbing and unacceptable. Before the game, the ace talked about being there to “bury the Cardinals” and begins his effort by giving a three-run homerun? In the playoffs, in a short series, with an offense that tends to be extremely streaky, a three run deficit could be enough to put the Phillies in serious trouble. Give him a ton of credit for what he did in the final seven innings. But sometimes in baseball, one bad inning can be extremely influential on the outcome of a game. Luckily for Halladay, tonight was not one of those nights.

Coming to Halladay’s rescue was Ryan Howard. Down 3-1 in the bottom of the sixth inning, Howard came to the plate with two runners on and none out. The first baseman delivered an excellent at-bat, working the count full and fouling off several pitches, waiting for Kyle Lohse to make a mistake. The mistake pitch came on the eighth pitch of the at-bat, as Howard launched a ball into the second deck. The homerun was the turning point in the game, and opened the floodgates for the Phillies offense.

Two batters later, Raul Ibanez hit a two-run shot of his own. In the next inning, Howard would strike again with a sacrifice fly RBI, and Shane Victorino and Ibanez would follow him with RBI singles. Hunter Pence drove in two more runs in the bottom of the eighth to cap the scoring for the evening.

While Howard and Ibanez drove in most of the runs, its also important to note the performances of the guys in front of them. Jimmy Rollins, Chase Utley, and Hunter Pence were all constantly on base throughout the night. Each had at least two base hits. Utley and Rollins both scored three runs each, and Utley had three hits on the night including two doubles. It was a great showing for Charlie Manuel’s new lineup that features Utley hitting second and Pence hitting third.

It was the offense’s night to shine at Citizens Bank Park tonight. The Cardinals had a chance to steal the momentum in the series, but the Phillies overcame early adversity to take the early lead in the series. Cliff Lee will take the hill in Game 2 tomorrow night.

Player Of The Game: Ryan Howard

Was there any doubt of who this should be? Howard, who didn’t hit a single homerun in last year’s postseason, started out the playoffs in a big way, delivering a crushing blow that really turned the tides of this game in favor of the Phillies. His performance tonight brought back memories of the player who was locked in during the 2009 postseason, the player who famously said in Colorado “Just get me to the plate”.