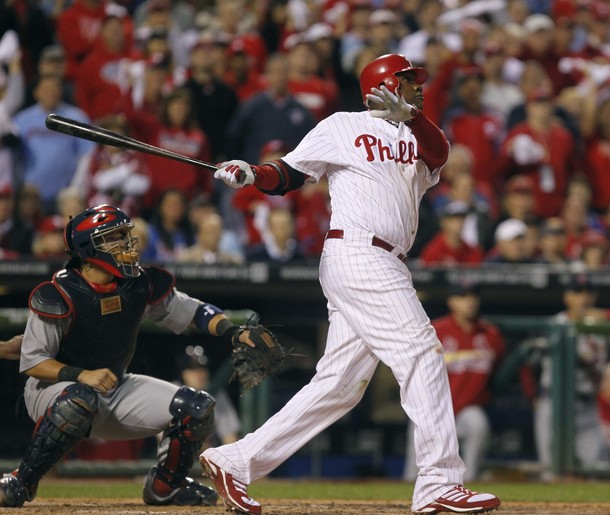 It was a classic, dramatic post-season situation in the bottom of the sixth inning. There was one out, the Phillies were trailing 3-1 and there were runners on first and third with one of best sluggers in Major League Baseball, Ryan Howard, at the plate. It was a 3-2 count after Howard had barely made contact on a couple of pitches.

The tension was so thick for the favored Phillies ball club and their fans, that you could cut it with a knife. The Phils fans throughout Citizen’s Bank Park were uncomfortable to be trailing 3-1 in the year’s first playoff game with last year’s NL Cy Young award winner Roy Halladay on the mound.

Cardinals starter Kyle Lohse was pitching a very good game up until that point. In this confrontation with Howard, the St. Louis righthander was doing what has become the book on pitching to Howard. Throw breaking pitches and off speed pitches to keep him off balance and throw him fastballs high and outside of the strike zone.

Unfortunately for the Cardinals, Lohse threw Howard one too many off speed pitches. The Big Piece was thinking off speed pitch and he got all of what looked like either a hanging curve ball or changeup.

“I was able to foul off a couple of really good changeups,” Howard said. “And then he left one hanging.”

There was no doubt about it when the ball left Howard’s bat. It sounded loud and looked even better. He stood there and watched the ball for a couple of seconds, as it took off like a shot. It pounded He rounded the bases as

This home run was especially important to the Phillies first baseman. He didn’t hit one home run or drive in one run in last year’s Phillies playoff disappointment. This wasn’t to be the case this year.

It was a masterful eight pitch abat against Lohse. He fouled off three off-speed pitches and one of them clearly out of the strike zone. Lohse made a mistake by leaving the last off speed pitch up there in his eyes and the big fella made him pay.

Jimmy Rollins, who had led off the inning with a single and Hunter Pence, who singled up the middle both rounded the bases in front of Howard. The home run got the Phils going and later in the inning Raul Ibanez hit a two-run homer to make it five runs scored in the inning.

The Phils hitters seemed to relax after that Howard home run and Citizen’s Bank Park was a joyful place to be after that tremendous shot. There’s no question that it was the difference in game one.