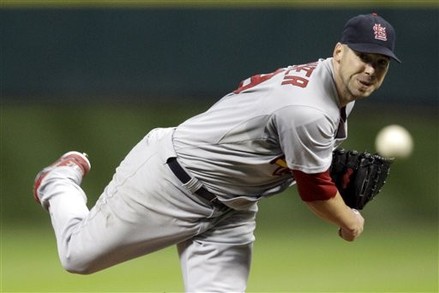 Just one game into the series, the Phillies already have the Cardinals in a desperate situation. In the second game of the series, St. Louis will hand the ball to their ace Chris Carpenter, who will be pitching on short rest. The righthander last pitched on Wednesday is season finale against the Astros, in a game his team had to have in order to advance into the playoffs. He answered the call with a two-hit complete game shutout.

This will be the first time that Carpenter has attempted to pitch on short rest in his career. History shows that most pitchers don’t perform as well when going on only three days rest. The average ERA of a short rest starter is over 4.50. Known for being creatures of habit, its difficult to predict how each individual pitcher will react when forced out of their normal routine, into something they aren’t used to.

Carpenter will be tasked with taming a Phillies lineup that exploded in Game 1 for 11 runs on 14 hits. Every batter in the one through six holes in the Philadelphia lineup made a strong contribution in the victory. Jimmy Rollins and Chase Utley scored three runs each, and combined for five hits on the night (including two doubles from Utley). Ryan Howard and Raul Ibanez drove in the bulk of the runs with seven RBI’s between the pair. Hunter Pence and Shane Victorino did a little of everything, combining for five hits, four RBI’s and three runs scored.

If the Phillies lineup is anywhere near as potent as they were on Saturday, its going to be very difficult for Carpenter to come into Philadelphia and have success pitching on short rest.

Opposing Carpenter will be a fully rested Cliff Lee. The lefthander faced the Cardinals once this season, and threw complete game, six-hit shutout in St. Louis back in June. In his career in the first round of the playoffs, Lee is 3-0 with a 1.11 ERA in three starts.

It’s important that the Phillies not take their feet off of the gas pedal in this game. They have a chance to really take the life out of St. Louis by defeating their best pitcher on short rest, and putting them in an even more desperate situation: the possibility of being down 0-2, and having to win three games in a row against this pitching staff.