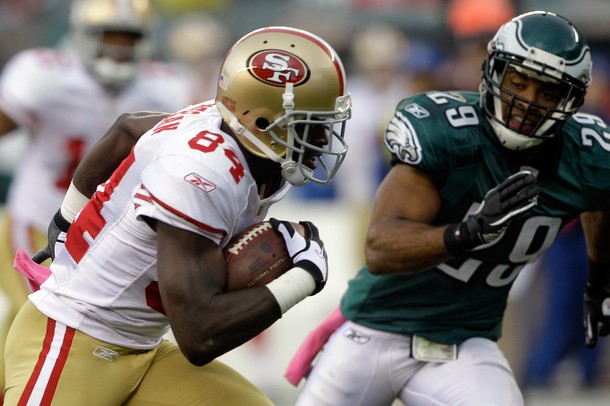 The second time the Niners got the football, they started on the twenty-yard line after the Eagles kicked a field goal to take a 23-3 lead. On the first play from scrimmage, Niners quarterback Alex Smith hit tight end Delanie Walker coming across the middle against the zone for a gain of four yards. Jamar Chaney and Brian Rolle made the play.

On the next play, the Birds played a zone with Nmandi Asomugha inside against the slot receiver at the nickel back position. San Francisco lined up running back Kendall Hunter outside with Asante Samuel lined up against him. Niners quarterback Smith was flushed out of the pocket by Phillip Hunt, who went inside from his left defensive end position and Smith got outside of him and rolled to his right.

As Smith rolled to right, Samuel lost track of Hunter and headed up after Smith leaving the shot outside flat area unguarde. Asomugha left his zone and wound up outside in what should have been Samuel’s area. The 49ers running back Hunter wisely drifted into the curl area where Asomugha had abandoned . With Samuel going up after Smith, Hunter was wide open.

If middle linebacker Jamar Chaney had been doing his job properly he would have slid over and took away Hunter as an option for Smith and the quarterback would have had to throw the football away. Instead, he came over from his middle linebacker spot and went up to get Smith. Of course Chaney was breaking the scramble rule just like Samuel had done. With two defenders abandoning their zone and coming after him, Smith just dumped the ball over the heads of the pursuing defender to Hunter. He caught the football and turned the play into a 44 catch and run.

You can see that Asomugha isn’t used to playing that nickel position because he drifted over by the sideline which was really Samuel’s area. If Chaney were a veteran he would have come over and seen the problem and clamped on Hunter, but like a young player he made the foolish mistake of going up after the quarterback.

On the next play, the Niners gave Hunter the ball on a quick trap, but the Birds did a good job on it and held him to a two-yard gain.

On the very next play with the ball on the thirty-yard line, Castillo tried a blitz and it was executed just as poorly as the zone defense from a couple of plays before.

Asomugha took off from the nickel spot on the blitz, safety Jarrad Page also blitzed. He got started so late, he might as well not even have gone. It was a poor job on his part of getting in position to blitz. Asomugha gave away his blitz, so it was quite easy for Smith to read it.

I have no idea what Samuel was doing on that play. You would figure with a blitz on he would be playing up in a press technique and taking away the inside routes of the receiver. Instead he dropped off and let Joshua Morgan run unimpeded on his slant route.

Safety Nate Allen was sitting inside and didn’t do anything on the play. He should have been able to do something but he gave no help on the play. Tight end Vernon Davis released and nobody was covering him either.

Eagles linebacker Brian Rolle looked like he was supposed to look up the receiver. It wouldn’t be a sound coverage to have a linebacker covering the wide receiver on that play. Rolle dropped into coverage and he was the closest one to the Morgan when he caught the ball on the wide open slant route, but Samuel made no attempt to cover him.

It doesn’t make sense to be sending Pro Bowl corner Asomugha on the blitz and leaving Rolle to cover the wide receiver.

With the score that play it became an 80-yard drive in four plays. Jim Mora Jr., who was the analyst on the Fox telecast, said before the play that the Niners needed to score immediately to have any chance of winning the game.

The Eagles Must Get Bigger On Goalline And Short Yardage