Eagles O-Line Is Getting Job Done, But Struggling In The Red Zone 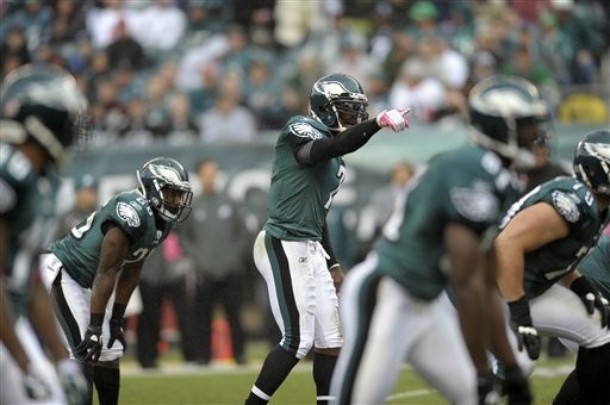 After Michael Vick’s proclamation after last week’s loss to the New York Giants that he was ‘on the ground constantly’ the challenge for the offensive line was in place. On Sunday the Eagles squared off with the San Francisco 49ers at Lincoln Financial field.

The Niners entered the game boasting a much-improved defense from recent years, including a rush defense that is fourth in the NFL in yards per game. The dominate run stopping ability of San Fran was apparent through out the game as they limited one of the league’s best runners, LeSean McCoy to just 18 yards on 9 carries.

The Eagles offense was able to move the ball effectively early and Vick was given plenty of time to deliver the ball to his receivers. The problem remained the same for the Birds, as their failure once again to score touchdowns in the red-zone would prove costly.

The Eagles anemic red-zone offense is not entirely on the offensive line, although there was a few instances in Sunday’s game specifically that hurt them. One instance was in the second quarter the Eagles had first and ten from the 49ers’ 14 yard line, Right guard Kyle DeVan was called for a holding penalty that was declined because the Niners Aldon Smith was still able to sack Vick for a ten-yard loss.

An offensive line’s performance is not always told by the box score. The numbers that the Eagles put up on Sunday were impressive and would not suggest that the O-line had much difficulty. The line did have issues especially the interior composed of rookie Center Jason Kelce, left guard Evan Mathis, and DeVan.

This interior group hasn’t been able to get any movement inside at the line of scrimmage on the goalline. They haven’t been able to match the power of opposing defensive lines. Both the Giants and the 49ers were able to overpower the interior of the Eagles offensive line. The Eagles have been struggling in the Red Zone for years, but they’ve gotten worse because I think the interior of the offensive line has gotten too small.

Left tackle Jason Peters and right tackle Todd Herremans are the best offensive linemen on this football team, which makes the Birds a good pass blocking offensive line. But the interior part of the line struggles at times against both the run and the pass.

Fortunately for the O-line Vick was able to cover their deficiencies by throwing for a career high in passing yards with 416 and was able to avoid the pass rush and tacking on another 75 yards rushing on eight attempts.

The Eagles will face another tough test next week when they travel to another much-improved team, the 3-1 Buffalo Bills.

In his weekly Monday afternoon press conference coach Andy Reid said that Peters has a “fairly significant” hamstring strain and is expected to is said to be day-to-day but will likely not play next week.

That probably means that King Dunlap, who blocked a David Akers’ field goal attempt in Sunday’s game, will get the nod at Left tackle which given Dunlap’s track record could prove troublesome.

Reid also announced that he is going to “evaluate everything.” He was not specific in saying if that would result in personnel changes or not. This could potentially mean that Dunlap might not be the only new face on the 0-line next week against the Bills.

Although the offense line has not played outstanding this year it would be surprising to see Reid shake things up on that line for several reasons.

For starters it would detrimental to switch guys in and out on a line that is trying to develop chemistry. Also there is no reason for the Eagles to panic offensively yet. They still rank in the top 10 in all major offensive categories and the offensive line currently ranks 11th according to NFL.com.

Eagles Must Deal With Internal Conflict Above All Else