Game 5 Could Be A Defining Moment For Halladay 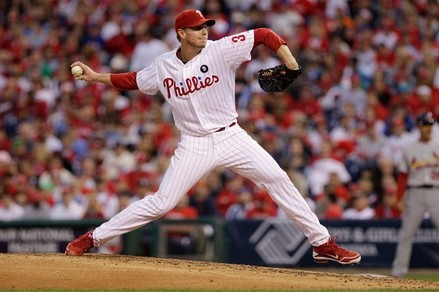 If you listen to any Phillies players speak to the media regarding Game 5 of the NLDS, you get a sense that they’re very confident about their chances in the decisive game of the series. The reason for that sense of confidence? Their starting pitcher, Roy Halladay.

“If we’re going to have one guy to get you a win, Doc Halladay’s a pretty good guy to do it,” said former closer Brad Lidge.

In his short time in Philadelphia, Halladay has compiled some remarkable achievements. He’s thrown a perfect game during the 2010 regular season, a no-hitter in the first game of last year’s NLDS, and won a Cy Young Award, all while compiling a 40-16 record in two regular seasons with the team.

After witnessing some special performances from the ace in the last two seasons, it’s no wonder why his teammates are feeling good about their chances in the series finale on Friday night. Halladay is the model of consistency, and every time he takes the mound his team knows they have a pretty good chance to win. Having an elite pitcher with such a great track record making a stand on the hill is a luxury that few teams have.

In this year’s playoffs, he put the team in an instant 3-0 hole after the first inning, but was able to pick himself up and recover in a big way, retiring 21 straight batters to finish his Game 1 effort, which ended in a Phillies victory. It wasn’t an ideal start, but it was certainly more than enough to earn a win on that night.

Game 5 will be an opportunity to add another remarkable achievement to his collection, and to enlarge his ever growing legacy in Philadelphia. It could be a defining moment in his Philadelphia career. Only so many pitchers get the chance to stand tall for their team in a decisive final game of the series. It will be interesting to see how Halladay responds to such an opportunity. The individual accomplishments of no-hit efforts and Cy Young Awards are all special in their own way, but they would mean so much more if one of his great efforts became the catalyst in paving the way towards a championship.

How will Halladay perform with all of the chips down? Will he meet the lofty expectations (of both fans and teammates), and be able to control the Cardinals hitters as he did in his final seven innings of work in Game 1? Or will Albert Pujols and the other veterans in the St. Louis lineup be able to make enough adjustments to do some damage against one of the best pitchers in all of baseball? The season hangs in the balance, with absolutely no margin for error. If the righthander comes through with another stellar performance, in an absolute must-win situation, it’s going to make his star shine brighter than it ever has before.

no rcp, you have it wrong, he is a stud, the unquestioned leader of the pack, the alpha dog, the others look to him to lead, and lead he will, the Phillies win game 5 because of him, his presence, and how the other players will perform because he is on the hill, bank on it, jakedog has, the lead dog will lead the Phillies into the nlcs, bank on it my friends

Halladay has not been SUperman for about 3 months now, He will give up some hits and some runs.. If he doesn’t have his A+ game, this Series is over

paulman – While I, by no means, am confident the Phils offense will wake up, it’s rediculous that you would think it impossible for them to score double digits against the Cards like they did in game 1. So shut up about the series being over unitl it’s over.

Didn’t mean to put had lol

Jake, I hope you’re right. These f^#@ers better hit the damn ball. Howard is f^#@ing M I A!! I can’t take it, if they lose too! We already have the losers across the street, to make us nauseous! All we’ll have left is the Flyboys. No B-Ball is pi$$ing me off too!

This game is up to Ruiz and the 1st inning. I just cant believe Ruiz isnt looking at tape of what is going on in the 1st inning with Halladay. The 1st pitch fastball doesnt work at all.Teams abuse him and then he goes to his off speed pitches. He needs to come out with off speed stuff. If he can get out of the 1st inning w/o giving up a run I see a complete game with him giving up 3 runs. We gotta score 4.

Does Howard know he only gets to see 1 fastball per at bat? If I have to watch Howard spit on his hands and take another 1st pitch fastball right down the middle and then swing at all off speed pitches in the dirt Im gonna break my TV. Greg Gross please tell “Rhino” to swing at the 1st friggin pitch right down the middle. It wont get any better than that.

Does anyone believe that this isnt for the World Series tonight? If the Phillies win tonight just imagine the relief, the pressure is off. This will be the hardest game they play. I feel they run through whoever they play after tonight. I dont even think it will be close. No one scares me.

exactly dag, this is for all the marbles, just be grateful we have big Roy, and speaking of Howard, what’s up with tv showing that prayer or meditation session before every at bat, when did he start that, stop thinking Howard, just hit the damn ball

Who is going to be the Hero Tonight….
It’s usually a role player or not one of the Big Stars who steps up in the PLayoffs and come thru with a big hit..

For the Cards — CF John Jay or 2B R Theriot or a Skip Schumaker…
For the Phils — C Carlos Ruiz or LF R Ibanenz, or Pinch-Hitters R Gload, J Mayberry or B Francisco again…

This should be a great game .. Let’s go Phils..

Halladay has nothing to prove: He is a multiple Cy Young award winner, has thrown a perfect game and a playoff no hitter, has won 20 games multiple times…He has already defined himself as a leader.

He cannot win when his team mates do not score a run…Simple as that.