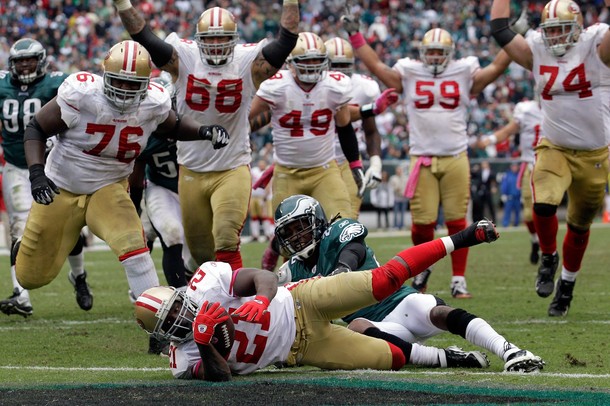 The Philadelphia Eagles have clearly been a disappointment so far this year. The biggest problem is how horrific their defense has been. We look at how terrible the linebackers and safeties are, and how disorganized they’ve been, but it is possible that they also aren’t giving the necessary effort?

San Francisco 49ers RB Frank Gore thinks so. And he says they were able to come back on the Eagles because they quit.

“I think playing that second half and the way we came out, the Eagles didn’t want to play no more,” Gore said on ESPN’s “First Take.”

Gore, you’ll remember, ran all over the field on the Eagles despite entering the game averaging less than three yards per carry and sporting a bum ankle.

Is it possible that the team has no faith in Juan Castillo or his system and have thrown their hands in the air? Could certain players be disenfranchised with how they are being used? I guess it’s possible.

However, I think we need to look at reality here. Frank, you’re telling me that a team with a fourth-quarter lead, sitting at 1-2 with – for all intents and purposes – their season on the line…quit? I have a very, very difficult time believing that. If Henery makes one of those two field goals, did the Eagles all of a sudden try the whole time? If he makes one and they win, are we making these comments?

No, that’s why Gore’s comments don’t pass the sniff test. He can say whatever he likes, but I just can’t imagine that players gave up on a game like this.