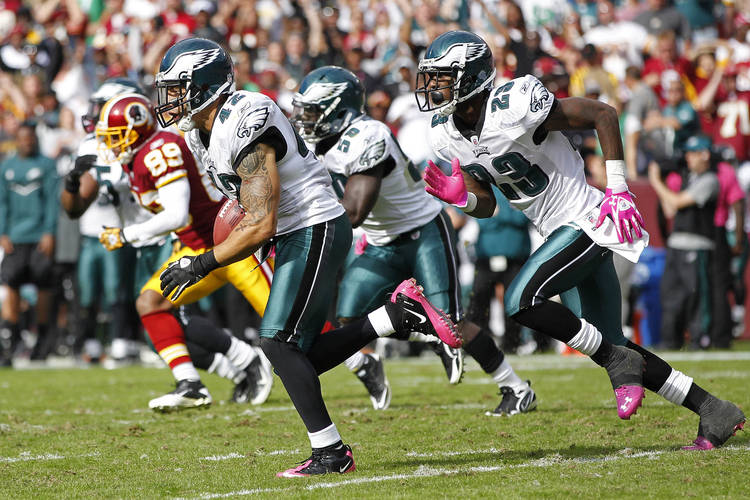 Alas, the Eagles have found a way to notch that heavily sought out second victory of the season. The win came only after four straight weeks of media and fan criticism as well as the team trying to figure out “whose fault was it this week as to how we let this one get away from us.” But nonetheless a win is a win and it came against no pushover in the conference rival Washington Redskins.

In the matchup we finally got a glimpse of what this defense is capable of doing, or should have been doing all season up to this point. We saw the highly scrutinized Nmandi Asomugha who had looked lost in this zone defense commanded by defensive coordinator Juan Castillo, finally show signs of comfortably settling into the formations
Up front and in the middle the Eagles gave no room for starting running back Ryan Torain to run.

The back had just 10 carries for 22 yards after having an 100 plus yard game in their previous outing. As previously mentioned this week, Castillo talked about making the adjustments needed to put an end to all the woes regarding the Eagles inability to stop the run. Utilization of the” wide nine” technique can be attributed to the Eagles second ranking in the league in total sacks (18). The scheme was commanded by former Titans d-line coach Jim Washburn.

Rookie Linebacker Brian Rolle who recorded five tackles in the win, spoke on the execution of the defensive scheme. “We shifted our ends inside on some obvious run downs from a wide nine to a six technique, bringing them closer to the center, “said the first-year linebacker. “We also moved our linebackers up toward the line of scrimmage. That allowed us to get into the gaps more quickly. Our goal was to force their quarterback, Rex Grossman, to have to try to make plays with his arm. That’s what we did and it was very effective.”

game to throwing down the field. This play calling hurt the Skins down the stretch as the birds were able to capitalize on pressure thrown balls that ended up in the hands of Coleman and company.

The ‘D’ registered four interceptions in the game including three by the aforementioned strong safety Kurt Coleman who had a career day. “It was a blessing for me to come in here and play the way I did today,” Coleman said. Not only was it a blessing for the second-year back to put on the impressive display he did, but it was a blessing for the organization to ultimately get the win and lift some of the pressure off of Andy Reid’s job security that had been talked about so highly as of late.

After having a rough start in which the former Buckeye lost his starting job, Coleman made a case in this one as to why he is extremely valuable to the team’s secondary. “Kurt has an appreciation for being a starter . . .he lost his job early and I think when he came back we saw a different Kurt,” Castillo said. “You come back and you get the job again and you find a new appreciation for it.” We saw the appreciation in Coleman’s play as well as the play of the overall defense as they forced Grossman into four INT’s and causing the QB to finish the game on the bench.

Although giving up 13 second half points and almost making this game turn into a second half debacle versus the 49ers part 2, the defense settled down and made the plays that they had to in order to seal the deal.
The game turned out to be the Eagles most dominate defensive performance of the season, handling both the run game and the pass with near perfection.

The big question mark for this side of the ball is how can they build off of this and carry the focus into the second half of the season. The brute of the Eagles season is still in front of them as they are set to face the Cowboys twice, Jets, Bears, and Patriots. With such cast of teams still yet to play, it was that much important for the Eagles to win the games that they lost in disappointing fashion. But the birds cannot soak in the already done and most look towards the undone.

While the birds saw themselves have a tremendous amount of success against the run-heavy Skins, facing the offensive ability of the Cowboys and Patriots may put things back in perspective for this Eagle team that still needs time to assert that they have a respectable defensive presence.

Until the men in midnight green can rack up wins against the rest of the teams on their tough schedule, coaching personnel as opposed to shifts in the defensive schemes will be the next move for this organization that is managing at a one week at a time basis.

Will Clarke and Lindros Both Play in Winter Classic Alumni Game?