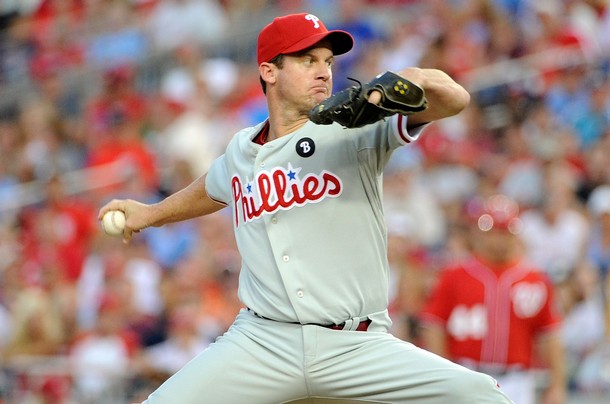 The Phillies made their first significant moves of their offseason today, declining club options on starting pitcher Roy Oswalt and reliever Brad Lidge.

Oswalt was due to make $16 million, and Lidge was set to take in $12.5 million. The Phillies will instead pay the two former Astros buyouts of $2 million and $1.5 million respectively. Neither move comes as a big surprise. Both pitchers have seen their skills decline significantly, and the team needs all of the payroll flexibility they can get.

Acquired from Houston at the 2010 trade deadline, Oswalt went 7-1 with a 1.74 ERA in 12 starts in first season with the Phillies, and also went 1-1 with 2.75 ERA in three postseason starts. However, the 2011 season wasn’t kind to the veteran. Nagging back problems kept him out of the rotation and on the disabled list for most of the regular season. He still finished the season with decent numbers (9-10 record, 3.69 ERA), but clearly wasn’t as effective or reliable as he had been in 2010. His lone 2011 playoff start went poorly, giving up five earned runs in six innings and taking a loss.

It could be the end of the line for Oswalt. There was talk before the season that he may decide to retire after one more run at a championship, and after experiencing what he went through with his back, it wouldn’t be shock if he calls it a career. He’s still effective enough to go somewhere and be an effective member of a rotation, but his days of being considered an ace are behind him.

Brad Lidge will forever be remembered for his incredible 2008 season, converting all 48 of his save opportunities (regular and postseason combined), and for being the man who famously struck out Eric Hinske to end to officially end the championship drought in Philadelphia. After 2008, he average at best, struggling to overcome injuries and mechanical issues, while also learning how to pitch effectively despite losing significant velocity on his fastball. After recording 48 saves in 2008, he earned a total of 68 saves in the following three seasons combined.

Despite losing his closer’s role to Ryan Madson, Lidge proved he could still be an effective reliever in 2011. He posted an ERA of 1.40 in 25 appearances, giving up just three earned runs in 19 innings. He should be able to find himself a spot in a bullpen somewhere in the majors, perhaps even back in Philadelphia for the right price.

No surprise here as I called these Options happening back in Spring Camp
Best Wishes to Oswalt ( who I would not be surprised end up with the Texas Rangers next Season to be close to home an still pitch and still get a decent paycheck while playing on a good team)
Lidge I can see returning to the Phils on a 1 Year incentive based contract
He can be a valuable middle/long relief for someone a ta discounted Salalry
So here’s almost $25 Million Savings off the books already for next Season.. Go lock up Hamels and get a 3B who can add Power and Production (maybe a Aramis Ramiriez or a David Wright) , Then Trade California Boy Chase Utley to the Angels,Dodgers or Padres for some IF & Bullpen and move Polanco back to 2nd Base to finish out his contract..

You’re joking right? You want them to trade Utley, who’ll be making 15M next year to two of the most cash-strapped teams in baseball???? And do you honestly believe the Mets would trade David Wright to their nemises???

Met’s don’t care about the Phils right now for they know they are noweher close to competing for teh NL East anytime soon and are not in a contending place right now.. Phils could offer Worley or Stutes & Brown, and the Mets would jump on it to get rid of Wrights big contract..
Utley Dodgers/Angels have some payroll coming off their books, and Utley would naturally fit onto either team since he’s from out there but his body is broken down and has been on a downward spiral since about the time that JC Romero was busted for PED’s..as a couple of other Phillies starting breaking down also.

Good! Now let Rollins & Madson walk, get Polanco, & Blanton’s @$$e$ out of here. Sign &/or trade for some knew, fresh blood. We need some breath’s of fresh air in here. We are too old, stale, injury plagued, & powerless. It’s ashame Howard got hurt, because I would of had no problem trading him, & signing Pujols. But that is just a fantasy & pipe dream now. He killed the playoffs & chance of trading him all in one pathetic swing! Am I the only one that thought he was faking at first, because he ended the playoffs?

David Wright hasn’t been good in 3 years, he stinks.