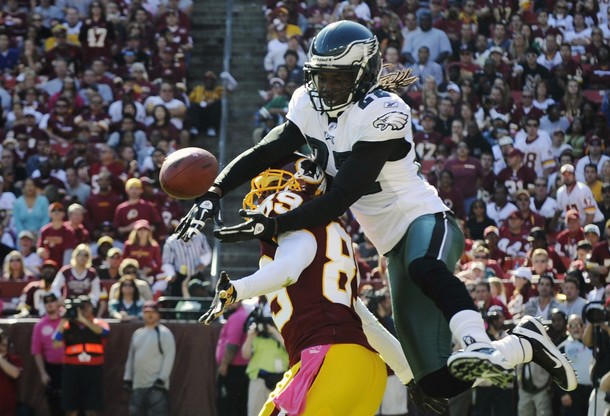 Eagles Pro Bowl cornerback Asante Samuel isn’t one to bite his lip when he has something to say. Today he had something to say and he didn’t bite his tongue. He doesn’t like the fact that his name has been continually coming up in trade talks.

Samuel called out the Eagles front office and did everything but name names. He accused them of playing a type of fantasy football with owner Jeffrey Lurie’s money.

“Some people upstairs might not want me, but who cares. They probably never played football.”

“They run it like a business, so they’re going to do what they need to do. Upstairs, they’re playing with a lot of money, playing fantasy football. They’re doing their thing.”

When he asked whether he was referring to Joe Banner and Howie Roseman, Samuel said: “Howie and Joe? I don’t know, do they fit the comment I made? There ya go. You think they’re upstairs playing fantasy football with the owner’s money?”

The trade talks have been bothering the cornerback and he’s got no problem letting people know about it.

“That sucks, doesn’t it?” Samuel said about the trade rumors. “Each trade deadline for your name to be flying around and you’re supposed to be the leader of this team?”

You know this isn’t a good time for this type of talk before this huge game against the Cowboys. It’s very distracting and Samuel’s talk about their being a power struggle in the organization is really alarming.

“I think there’s a little power struggle around here,” he said. “But it’s all good. Like I said, me and Andy cool. I’m here to play for Andy. He’s my head coach and that’s all that matters. …

“Everything has been good with me and Andy. That’s my guy. That’s who I play for, that’s who I continue to play for. I go to war for Andy. It is what it is. All the other stuff upstairs.”

Distinguishing Lows and Losers Between Bryzgalov and Walker