Bryzgalov Will Be Worth Every Penny 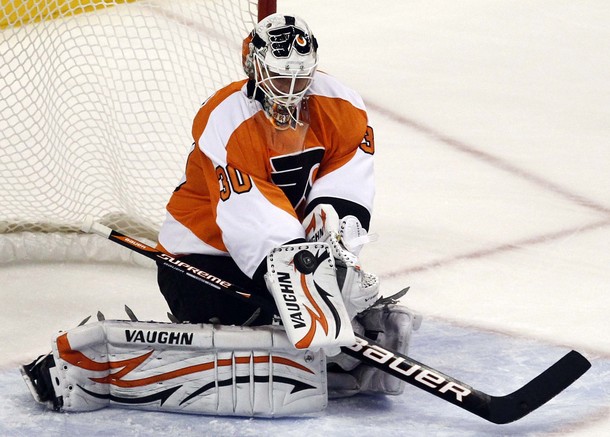 The month of October has not been one that Flyers fans will want to remember. After jumping out to a 4-0-1 start, the Flyers have sputtered to a 1-4 record since. Losing captain Chris Pronger has put this this team in an emotional whirlwind that is all too eerily reminiscent to the 2009-2010 that barely squeaked into the playoffs.

Many people seem to be pointing the finger at newly-acquired goaltender Ilya Bryzgalov as the reason why the Flyers are faltering thus far. Ironically, goaltending hasn’t been the 500-pound gorilla for the Flyers this season, not in the least.

When the Flyers signed Bryzgalov to a lucrative 9-year, $51 million deal, people believed that the Flyers were automatically the team to beat in the Eastern Conference. Expectations were among the lines that he would post a shutout almost every single game. As a goaltender for over 15 years myself, I knew right away that Bryzgalov would have a rough transition coming into the season.

There is more to the position of goaltender than just stopping the puck. Unless you play the position, it’s hard to comprehend how it works. There are even head coaches in the NHL who do not truly understand the position. This is a two-way street. When a goaltender does not understand the defensive system of a team, he too will struggle.
This is exactly what Ilya Bryzgalov is going through right now, for multiple reasons.

Coming from the Western Conference, Bryzgalov has first had to adjust to the different style of play in the Eastern Conference. In the West, teams tend to work off what is called the “East-West” system. To simplify, teams pass the puck from side board to side board, forcing the goaltender to make more reaction saves moving from each post. Teams are quicker in transition, and the game flows with a much quicker pace. The East is the exact opposite, where teams play more-so from each goal line, setting up more high percentage shots. This change in pace forces Bryzgalov to play more of a positional style, which is an adjustment he is still trying to make to his game.

Another transition is something that Bryzgalov mentioned to last week was communication with his defenseman. A goaltender must always talk with his defense, whether knowing when to play the puck, or alerting their defenseman when an opposing player is on their rear end. This is key for not only a goalie, but the team defense. If there is a lack of communications, turnovers are the result. This issue showed its ugly head when the Flyers played the Canadiens.

Believe it or not, there has been only one goal that you can truly pin on Bryzgalov this season. The mishap behind the net against the Blues is the only one where you can point the finger. The main issue of Bryzgalov’s slow start has been the defensive shortcomings of the Flyers. Too many times the defense has screened, deflected, or been unable to clear the crease with Bryz in a vulnerable position. There have been too many occasions where he has not gotten the help from his defense and has been left out to dry. For the first time in years, the questions of goaltending have switched to the defense.

No matter how good a goaltender is, he is only as good as the defense in front of him.

Despite the fact that this team is still a year or two away from being a true contender, Bryzgalov is going to be a major factor in that. Once the defense plugs its holes, Bryzgalov will become that much better. The Flyers cannot win the Stanley Cup in October, and he can only get better from here on out. This is the first legit starting goaltender the Flyers have had since Ron Hextall. He will be the missing link to what will win the Flyers the cup.

Throughout his career, October has never been overly kind to Bryzgalov. Except for his fast start in the 09-10 season, he has been mediocre at best every other year. His stats may not truly reflect it, but he looks the same as he has mostly every other October. The Bryzgalov you see now is not the one you will see come January 2012. Luckily for Flyers fans, his best month has been February, a month where historically the Flyers have struggled.
Like all things, practice makes perfect. Just because of his contract, let’s not think that one month into the season that what you see is what you’ve got.

I’ll be back next week to evaluate the Flyers defense as a whole. Questions/comments, or just want to talk hockey? Follow me on Twitter @FlyerFan34