Flyers Do The Right Thing And Remove Muzzle From Bryzgalov 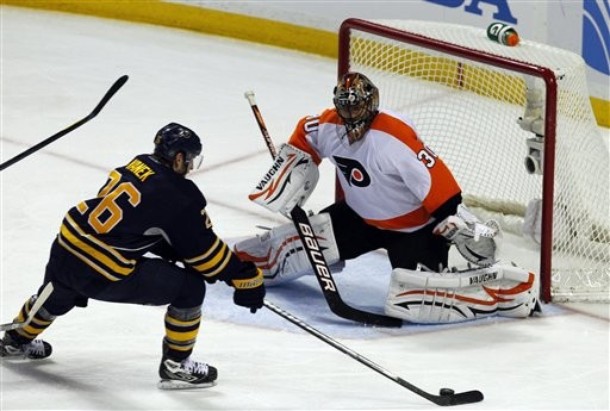 Tuesday morning, the Flyer’s announced that goalie Ilya Bryzgalov requested that he only speak to the media after games in which he played in. This immediately sent media members and Flyer’s fans into an uproar. The feeling was that Flyer’s management and coaching staff may have suggested it.

Why would the goalie or the front office tell their free-spirited new goalie to stop talking? Goalie coach Jeff Reese explained it was to help Bryzgalov focus. However, I believe that since Bryzgalov is a goalie who enjoys talking to the media, that this would not have the desired effect the front office would hope for.

Later in the afternoon, the fear was partially quashed. The Flyer’s then announced that Bryzgalov would not talk the day before a game and the day of a game, but would talk after games. This policy was short lived. That night, the Flyer’s removed the metaphorical muzzle from Bryzgalov stating he could talk to the media at any time, just not on game day before a game. In summation, everything was back to the way it was before the debacle.

What to make of this rollercoaster of a Tuesday? First, this was the Flyer’s overreacting to some lackluster play by their big summer acquisition. Maybe the Flyer’s weren’t comfortable with how open Bryzgalov is with the media. After their 9-8 loss against Winnipeg last week, he was very open in admitting that he was struggling right now, and didn’t know why. Coach Peter Laviolette explained that they felt Bryzgalov was being overwhelmed so early in the season. While it would have been easy for the Flyer’s to stand by their (short-sighted) decision, I commend them for admitting they were wrong by removing the no-talk order.

Bryzgalov’s open-minded attitude is exactly what the locker room and this city need. His honesty is refreshing and is humor is often entertaining. In a city where the Phillies ended the season on a bitter note, the Sixers might not even have a season, and where Andy Reid’s press conferences follow the same script each week, Bryzgalov’s colorful attitude is exactly what the city of Philadelphia needs. His humor is infectious and keeps everyone in the locker room loose.

When you combine Bryzgalov’s humor and honesty with the likes of Chris Pronger and his playful jabs at media members, the Flyer’s locker room is certainly going to be more interesting than last year—and that is a good thing. When the young guys see the veterans and how they talk with the media, they will be more relaxed. Relaxed youngsters on this team can only add to their potential success. Allowing Bryzgalov to talk as much as he wants also keeps the spotlight off the young guys and we all know that Bryzgalov has no issues with the spotlight being on him.

It is true that from time to time Bryzgalov will say something ridiculous or slightly insane, but he never says anything that will create any sort of tension in the locker room. After last years rumored locker room divide, a united locker room will go a long way towards success. I promise Flyer’s fans that they will love Bryzgalov if they don’t already, he will rebound from an uneven start. I promise that you will all laugh at something he says before the season ends. Lastly, don’t forget, a talkative Bryzgalov is usually a happy Bryzgalov. A happy Bryzgalov is the biggest key to the Flyer’s pursuit of the Stanley Cup.

Have The Running Game And Short Passing Made The Eagles Unstoppable?