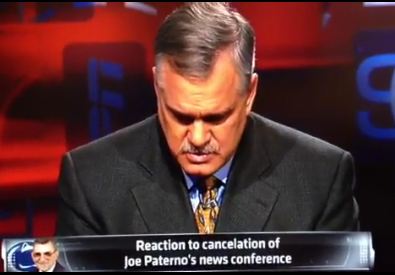 The impact of the revelations about Jerry Sandusky are exploding around us. Matt Millen, who attended Penn State was just on ESPN talking about how Sandusky has always been so helpful to them when he played at Penn State. Sandusky was Millen’s position coach and he was a friend of the former NFL linebacker, Detroit Lions GM, and ESPN broadcaster.

The former Penn State linebacker broke down in tears on the set because of the impact of what has reportedly happened to these young boys and the Nittany Lions football programs, which Millen considered to part of his family.

The mothers of two of the victims talked to the Sara Ganim of the Harrisburg Patriot-News and shared some of their disgust and anger about the betrayal of the Penn State football program. They had nothing

“I’m so upset,” said the mom of Victim Six. “My son is extremely distraught, and now to see how we were betrayed, words cannot tell you. To see that Graham Spanier is putting his unconditional support behind Curley and Shultz when he should be putting his support behind the victims, it just makes them victims all over again.”

“I’m very proud of him,” one of the mothers said about her son. “He’s a brave kid,” she said. “And his major concern in the whole thing was for anybody else. That was his big thing. He said, ‘I just don’t want this to happen to anybody else.’”

Questions And Answers About The Eagles Defense

Paterno should step down.

I think to wipe the slate clean maybe Joe should. As far as being guilty i dont think he is. He reported allegations and the AD brushed them off. I think Penn State has been looking for a way to remove Joe and they found it.

Joe PAterno’s is the face of the Prgram and the University as a whole..
Him being informed and him simply pushing it up the ladder of command is a cowardly act and not good enough.. It’s his program, and he former top assistant and one of his closest friends who after 28 Years of being Paterno’s closest assitant, suddenly retires at 1999 at the age of 52 when many thought that he someday would be the heir apparent as HC to Paterno.. Why would he retire suddenly like that in the prime of life, with no medical issues,,,Did Joe Pa and others know Sandusky maybe had some issues/probblems and hoped it would go away with older age,,,Why give a man with potential issues accecss to all your facilities and camps,etc,etc
Lots of stench going on in Happy Valley right now and there will be a whole lot more to come out as this story continues to play out..
I think Coach Joe Pa has coached his final game and will take a leave of absence for the remainder of the 2011 Season

i would have loved to have been that janitor that walked in on that pedophile. matt millen would have been crying about me opening up his skull

Poor Paterno, poor Millen, poor PSU, f^#@ all of them! When is someone going to say poor kids who got their innocence taken away!? And BTW, probably will never be normal ever again, & will be in therapy for the rest of their lives. For someone like me who has 4 kids, 5 God kids, & a Grandchild on the way, this is flat out sickening, & unforgivable, for the PSU Administration’s actions in all of this. They covered all of this up, to uphold their supposed pristine history & legacy. You all are frauds, disgusting & a disgrace to humanity. 18 kids now! This is going to grow to mind boggling proportions, just wait & see. Absolutely disgusting & reprehensible! For all of the stupid @$$clown students, who put on that idiotic, moronic, & disgusting display, yesterday, in front of Paterno’s, should be ashamed of themselves, & ought to do humanity a favor & jump off of a bridge. You disgust me & make me feel ashamed, to ever have been a PSU fan! How do you hold a pep-rally, for someone, who was part of the cover-up & conspiracy. You all are senseless, clueless, idiotic, moronic, @$$clowns!

Excellent point paulman re why successful d coordinator suddenly retires in his early 50s, paterno knew and wanted him out, And paterno is penn state, there is no pushing the issue up the command, you are the commander, without you we wouldn’t even know of psu, o re pedophile sanctuary university

Dcar good post…couldn’t of said it any better…We can come on here and disagree about the way the Birds played, or about Andy play calling, or about the Phillies etc…but when it comes to this disgrace of a University there is only one side if your a human being. PSU is a shit hole and the students/players that are sticking up for anything that is PSU, especially Paterno, need to do society a favor and go to federal prison for the rest of their lives with that sick f@#k…Maybe they can all drop the soap on each other and see how those poor kids felt and then lets see who they stick up for afterwards…

Joe Paterno is a despicable brain dead zombie out there…he is just as bad as the child rapist. How are you going to be told that you best friend/side kick who is 60 years old was just seen in a shower doing reprehensible acts to a 10 yr old boy and do nothing but tell your boss? Hello, Paterno you basically are the boss at that shit hole in the middle of nowhere…Call the police and report him man, how dumb can somebody be..this is happening in your locker room and in your territory and you do nothing. ON top of that, he let the guy stay on Campus, reports said he was there last week.unbelievable..The NCAA should have him fired on the spot and nullify all his career wins/bowl seasons, and championships. Pete Rose is banned from the MLB for gambling. USC gets killed because somebody bought Reggie Bush a freaking car…Paterno and his legacy should be banned from anything that is College Sports for being an associate of child rape at PSU.

You know what…don’t even send that sick f@#k to prison…he will be having the time of his life in those showers…give that guy the death penalty.

Excellent posts here. I’ll take it a step further and say that I believe that Joe was the total root cause of the cover-up. I think that sometime between 1979 when the the scumbag started the kid’s program and 2002 when McQueary caught him in the act, Joe Pa MUST HAVE CAUGHT WIND OF WHAT WAS GOING ON. I believe that’s why Sandusky retired young and why Joe would have never left Jerry the keys to the program. I think Joe was pulling a CYA when he reported the 2002 incident, and I would not be surprised at all if Joe dictated how the whole thing was handled. Even if it was Joe’s old world catholic upbringing that made him downplay the situation, this dictated how McQueary, Curly, Schultz and Spanier perceived and handled the situation. It also certainly empowered the scumbag to keep molesting boys since he barely got a slap on the wrist. Joe turned a blind eye to this scandal just like his whole generation did when their sons complained about the priests at school touching them inappropriately. .

He should rot in jail along with pope Benedict for their cover-ups.

Joe Paterno has annouced that he is retiring after this 2011 Season.. Fyi..

I made a prediction last night to a friend that – just like Tiger Wood’s mistresses – in this case Sandusky’s victims – there would be more and more coming forward – a report today that up to 20 have called the hotlines – the second part of my prediction is within a month, Sandusky will fall asleep in his car – in his garage – while it is running.. the amount of time and access he had to young kids…. this is going to get even uglier (is that possible)