Questions And Answers About The Eagles Defense 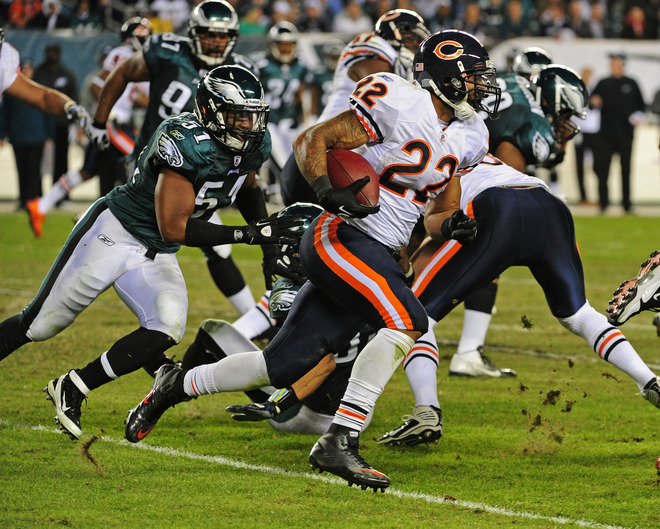 What kind of defense lets a team begin the game by getting the ball run down their throats? I think the Eagles need to draft some big tackles. I think they miss Antonio Dixon because he’s the only big tackle they have.

Why were those holes big enough to drive a tractor trailer through on that first drive? I don’t think the Eagles were ready for the football game from an emotional standpoint. They thought they were going to walk through the game with no trouble.

Why didn’t the Eagles take Jason Babin out of the game when they saw the Bears game plan of running the ball at him every other play?
The Eagles need to have one or two big defensive ends, so that they can get bigger if a team wants to run the ball against them.

Did the Bears put together a strategy that will allow other teams to dominate the “Wide Nine”? I think the Eagles are going to see more teams double their defensive ends with tight ends the way the Bears did last night.

Why is it that Dominique Rodgers-Cromartie might be the most talented cornerback in the NFL but he can’t cover anybody? I think we see why the Cardinals were willing to trade him. The coaches need to work with DRC all off-season to improve his fundamentals.

How does a stiff like Roy Williams pull away from DRC on a key play with the game on the line? DRC let Williams get inside of him on the key pass that he caught. DRC has to know when you’re playing man-to-man you can’t let the receiver beat you inside. DRC doesn’t play smart football.

Why was Earl Bennett able to beat DRC every time they matched up against each other? Bennett was able to outmuscle DRC on his routes. DRC needs to get in the weight room and get stronger.

Why does Asante Samuel line up seven yards off a receiver who is lining up on the five-yard line? Samuel needs to mix up playing up on the receiver and playing back. He can’t play that far off a receiver or teams are going to simply throw quick hitches. He was so deep, Bennett could have caught the football and run into the end zone.