Eagles Looking To Put First Half Behind Them 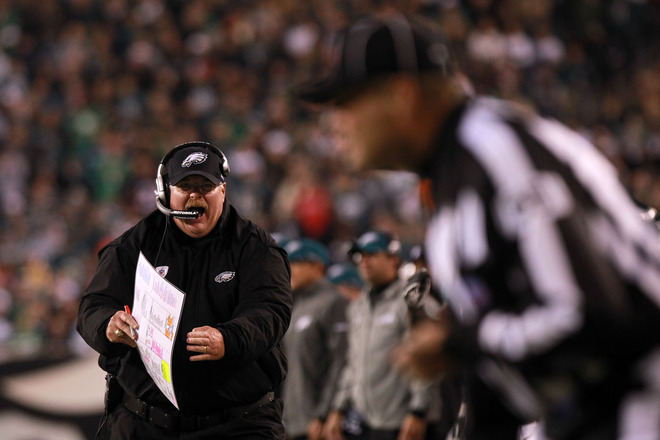 The Philadelphia Eagles had everything it took to be labeled a playoff contender: The hype, the players and a qualified head coach. Offseason acquisitions like Nnamdi Asomugha, Dominique Rodgers-Cromartie and Steve Smith led many to believe that talent was in the right place and the Eagles were ready for yet another playoff run.

That was on paper.

Through eight games they Eagles have a lousy 3-5 record with their playoff sights waning by the week. Reid blames many pieces to this convoluted puzzle. “Some of it’s penalties, putting ourselves in a bad situation, and other parts are making sure that we get the right plays in to allow the players to execute. It’s a team effort,” he said Tuesday afternoon.

The culmination of under performance and unstable coaching by new defensive coordinator Juan Castillo has led to second half collapses. Through the first five games, the Birds only scored seven points in the fourth quarter. In order to close out a game, contending teams must run the football and keep the opposing offense off the field.

Reid blames not one player, but the whole team. “I’ve told you,” he said. “It’s turnovers, it’s penalties. I don’t feel people are necessarily stopping us, that we’re stopping ourselves, and we’ve got to take care of that. Right now that’s what you can control, and so you go to work and make sure that you get that taken care of.”

Quarterback Michael Vick’s thoughts parallel. “We beat ourselves. I think when certain things happen in a game, we kind of, it’s like we go into a panic, and we can’t do that. We’ve got to keep pushing forward, [and] keep that edge and attitude,” he said.

Reid continues to appoint himself the blame yet the Eagles continue to fall – most recently versus the Chicago Bears on Monday Night Football, 30-24.

The Eagles now have to jump three teams to reach a Wild Card spot. The Bears, Dallas Cowboys, and Tampa Bay Buccaneers all trump the Eagles’ record; leaving Philadelphia in a limited, clear position. Win. “It’s hard from a standpoint that we’re not living up to our potential,” wide receiver Jason Avant. “We won’t go out and act like we are playing well. We are not playing up to our potential. We can win and you saw that in the Dallas game that we can play. We need to do that consistently.”

Don’t worry guys….We have another offseason to get excited about.
Let’s not talk about how Andy make a blindspot each year so we’ll feel hope going into next season. Last season it was the right corner we left void by trading Sheldon Brown without an adequate replacement.
We feel the void in the offseason with Asmo yet greater blindspot opens.
Andy places a failed offensive line coach over a talented bunch of defensive players.

G Cobb need to do a pool with fans guessing what blindspot will andy create next.

Remember Segrest over the special teams? How did that one pan out?

DRC could be a better kickoff returner than Lewis, yet Andy weakens 2 positions by putting DRC in the slot knowing Hanson is a better slot man.

this team is one big experiment looking for an identity and Blind Spot Andy is to blame.

Now, I hear people blaming this pathetic half on limited OTA’s with this team implementing a new scheme with new coaches, and new players.

Give me a damn break!

The 49ers have an all new coaching staff and had limited OTA’s!

Here it is another must win at home against an NFC team with the future on the line and Andy’s team does what we’re use to.

the eagles are a bunch of runts they dont have the personel to dominate the middle of the field celek is good avant is good… maclin and jackson never go over the middle.. i thought clay harbor should have a chance because of his explosion and speed but they continue to go with celek and no YAC.. same with avant hes very good great hands but no YAC .. half of the time avant falls down trying to make a play.. where is cooper isnt he supposed to be tough.. and the play callign is so predictable the teams know all of our pass plays .. we never throw in a double move… not saying vick would haev time to throw but if not try rolling him out.. team consistantly have us off balance.. on both sides of the ball.. there is no fight or agresiveness on this team .. theyre a bunch of weaklings

Forget about the 1/2 of the Season being in the rear-view mirror, this 2011 Season is over as far as making the playoffs goes.. Though the Eagles won’t officially be eliminated this week, if the Falcons & Bears Win, then it’s all over in my book, since they will be 3 games behind those teams and lost in head to head games with them.. Everyone keeps saying well the Giants havea hard schedule… Yes they do, but they keep winning and not only have 3 game lead over the Eagles but beat them head to head already so even if the EAgles beat the Cards & Giants, it’s over in my book unless the Giants do a complete collapse which is always possible but very unlikely.. The Eagles should worry about their opponents and being ready to play than worrying about how difficult the Giants schedule is.. Take care of your own business

Just to rub a little salt into the wound…
Anyone notice how well my Top 2 Free-Agents to Pursue in 2011 are playing with their new Teams… LB Steve Tulloch and CB Carlos Rogers for the 49ers
I have been on record stating that I wasn’t crazy about the Eagles signing CB Asmo, QB V Young or RB R Brown and that unless they addressed the LB with proven veterans in the Wide 9 Scheme, that they would struggle, I also Stated the Safety position was weak and a work in Progress.. Now I did not forsee the CB’s playing as bad as all 3 of them have and I expected to DL to be a little better (Trent Cole is already beginning to fade as it gets closer to Hunting Season.. you can mark your calender on it every Season)
Babin is a Pass-rusher only and should only play on obvious passing downs, He is brutal against the run and Cole is not much better in stopping the run either.. The Eagles really miss DT A Dixon which would have helped limit the snaps of C Jenkins who when fresh has been very good, but he’s getting 50 snaps a game which is probably 15 too many in my opinion
I wished the Eagles would have taken DT Mohammed Wilkerson with their 1st Round Selection as I suggested for he will be a good DL for the next 10 years and could have really helped this Eagles DL in his rookie Season..

I guess I will go back to my GM- wanna be Basement and start researching the 2012 Draft and Possible Free-Agents, but it all goes for not for the Eagles (Coach AR/GM Roseman) are going to continue ot make boneheads moves Roster wise.. it’s what they do..

paulman, the problem is not only questionable free agent signings, but more so failure in the draft, we are seeing the cumalative effect of poor drafting, and experience shows building championsips through the draft, your core players, far more succesful than high priced free agents, one or two free agents to get you over the top, ala kearse to, but not the core of your team, including your qb

I agree 100% , when checking the last few Drafts and the players selected within the 1st 4 Rounds, these are the results since 2005

Pretty poor prodcution from the Top 4 Rounds of these Drafts

Dont’t worry guys!!!!! we HAVE NEXT YEAR! funny, i have been saying that every year….oh well look on the bright side, we have ANdy reid

i hope he only run mccoy 10 times this week….16 was too much last week…Vick 38 passes was not enough….i want to see 45-50 from Vick every week than Reid true philosophy will prove his true genius

I believe Andy shouldn’t change a thing. After all….it’s been 13 seasons of excitement.

We’re competitive and that’s all that matters. Lurie should sign Andy up for 5 more seasons….we also need to get that passing ratio up into the mid 90’s..More trick punts.and let’s put the strength weight coach over the defense next season.

As I said a million times, since the season started, they are not good, they won’t make the playoffs, they’ll be lucky to win 7 games, & square peg in round hole Reid, needs to be $#!t canned. Nothing has happened yet, to prove me wrong.

How do you like those Draft %’ Dcar..
Draft picks ifrom the Top 4 Rounds usually refelct the Top 125 Players ranked out of COllege and man teams use these Top 4 Rounds to really build and mold their Rosters with Starters and solid rotational players.. Many teams will start tkaing chances, flyers of planyers in the later round for Depth or taking a chance on a player due to previous injury, character issues, etc,etc..
Looking back at the Eagles success or lack of since 2005, to only have 40% of their selections even on their Roster , in which only 1/2 of those are Starters, doesn’t reflect too well on the job by the GM/Personnel/SCouting Department and when you have 60% of All Top 4 Round Selections not even on your Roster, that’s a huge amount of misses on the Top Talent in the Draft.. (Paulman’s Mock Drafts could have better success than this).. and in a nutshell, this is part of th eProblem with the Eagles now and moving forward, is that they have done such a poor job sinec 2005 in the Draft, that they need to go out and overpay free-agents who may or may not fit the program, who may have history with injuries, who may come from other schemes and just not be a good fit and this is what we are saying play out with this Eagle Team in 2011 and next year they will finally address the LB position which is too late and there’s the learning curve for thos eplayers and maybe a new DC who may have a diffeent schemesand more adjustments for the players on the roster or on who to acquire or draft.. and so it goes..