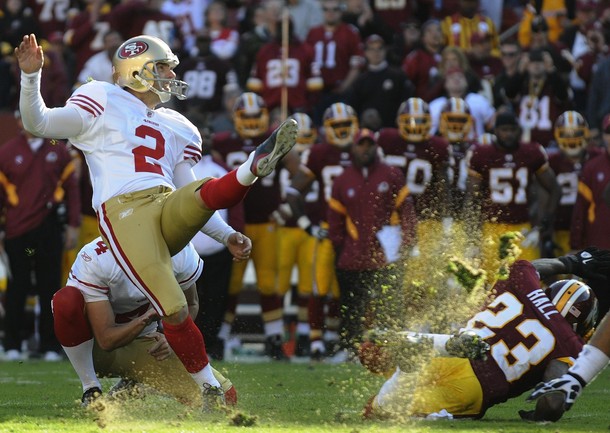 Here are three “Stone-Cold Locks” for Week 10 of the 2011 NFL season. I think you should take the San Francisco 49ers in a key matchup against the New York Giants. Next up, I have you jumping on board with the Carolina Panthers. Finally, it’s the Houston Texans over the Tampa Bay Buccaneers.

Both the Giants and the 49ers have surprised a lot of people this season as they have both found themselves atop their respected divisions. These two football teams are red hot at the moment. The Niners have won six straight while the G men have reeled off six of their last seven. As we break down the match ups in this one we look at the San Fran running attack against the Giants run defense. We all know the Giants front four can get after the quarterback as good as anybody but they can also be pushed around a bit in the run game. Frank Gore should have another big game this week, I just don’t think the Giants have enough beef up front to slow him down. The Giants will also be without Ahmad Bradshaw. Though the New York offense has been able to get by with a struggling running game, I’m not sure we should expect it to continue for much longer. With Bradshaw out it will be Brandon Jacobs carrying the load yet again, and this week it will be against a very stingy 49ers defense. Jacobs has struggled mightily at times and I don’t expect him to get back on track this week. The weight of the Giants offense will likely be on Eli Manning’s shoulders this Sunday, though he is having a very good year I just don’t see the Giants offense doing much. The G men have to fly across country in this one and it will be very easy for them to look ahead to the Eagles next week. Very tough spot for the Giants this week, I like the Niners to cover.

TENNESSEE at CAROLINA
THE PICK, CAROLINA -3

Last week the Titans suffered a painful second half collapse to the Bengals. In all likelihood this home loss will haunt the Titans for the rest of the year. Houston won again last week to put Tennessee even further back in the rear view mirror. Last weeks loss is the type of loss that can linger. They were outscored 17-0 in the second half to the Bengals offense lead by rookie quarterback Andy Dalton. This Titans football team needs to run the football to have success, and Chris Johnson has been a complete disaster this season. An aging Matt Hasselbeck might still be capable of “managing” a game for you, but he is not capable of lighting it up through the air. The Panthers on the other hand are coming off a bye and have played relatively well of late. Unlike the Titans the Panthers running game has been pretty respectable, and Cam Newton has been very impressive in his rookie campaign. The Panthers have also been tough at home this year, 2-3 straight up and 4-1 to the spread. Green Bay handed them their worst home loss and it was only by 7 points. No team has had an easy time against Panthers this year and the 2-6 record doesn’t do them justice. I’d be very surprised if Tennessee gives Carolina a tough game this week, It won’t take much for this team to totally fall apart after last weeks gut wrenching loss. Tennessee has a lot of problems and I don’t see much light at the end of the tunnel. Carolina is playing energized and exciting football and quite frankly I think the Panthers are the better football team. Lay the points with Carolina at home.

Laying points on the road is not something that I do a whole lot, but this is the a good opportunity to go ahead and do it. The Texans are playing at a very high level right now and they’ve been able to reel off three straight victories to give themselves a nice lead in the NFC South. Houston does it all offensively and Tampa might have a real tough time stopping the Houston rushing attack this week. The Bucs defense has struggled, giving up nearly five yards a pop on the ground this season. They will have their hands full dealing with Arian Foster and Ben Tate. Both backs have produced for the Texans to form one of the best two headed rushing attacks in the game. The Tampa defense has been lackluster in many different areas this year and I think Houston will expose them on the ground as well as through the air. The Buccaneers pass rush is nothing to get worked up about and Matt Schaub should have plenty of time to pick apart the Tampa secondary. Tampa is over matched in pretty much every aspect of this one. Lay the points with Houston.

Eagles Looking To Put First Half Behind Them

Some good picks and I agree with you,,
I would not count out the Giants though and expect a solid contributions by 3rd String RB Danny Ware and even 4th String RB Da’Rell Scott — (Brandon Jacobs is toast in my opinion as this will be his last Season in a Giant Uniform)

Why does G post this? How the hell are these mortal locks? The first two games are a crap shoot and Houston is on the road.

You want three locks? Hell I’ll give you 5.

Not so fast as the Eagles being a lock..
QB J Skelton will visit the Linc and have a big game as will RB Beanie Wells..
This low point of the Eagles Season is just beginning..

I dont see Carolina beating Tennessee or the SF beating the Giants. How are these “stone cold locks” …

Also, the Eagles will crush the Cardinals on Sunday, that’s my “stone cold lock” … COUNT ON IT!!!

Did you just have an Epidoural…

eeeeekkkkkkkk!!! i guess that’s why I don’t pick games for a living!!!