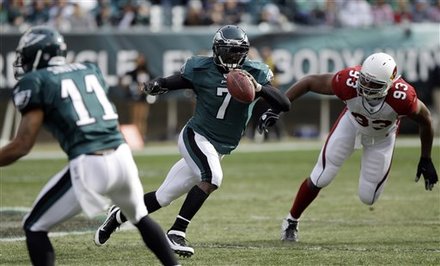 Eagles starting quarterback Michael Vick won’t practice today.  Of course, he’s still being bothered by the two broken ribs which he suffered in the Cardinals game.

It seems that Andy Reid isn’t comfortable going with Vince Young or Mike Kafka.  He won’t name which quarterback will play if Vick can’t go.  I think he’s holding out hope that Vick will be able to go come game time.

Safety Jarrad Page was released and wide receiver Chad Hall will take his place on the active roster.  Page played himself out of job by missing so many tackles in quite a few games. It was just a matter of time before they got rid of him.   He was one of the slowest and non-athletic safeties, I’ve ever seen.

Hall is a security blanket for Reid because he play every wide receiver position.

Page was also identified for being at the Juliet Supper Club in Manhattan where a 44-year old man was killed.  He was there along with New York Giants players Aaron Ross, Antrel Rolle, Hakeem Nicks, Victor Cruz, and Chris Canty.   They were celebrating Cruz’s 25th birthday.  Reid says releasing Page had nothing to do with the shooting.

Left guard Evan Mathis will be back in action, today.

Eagles’ Retreat: A Matter Of Breaking What Was Fixed