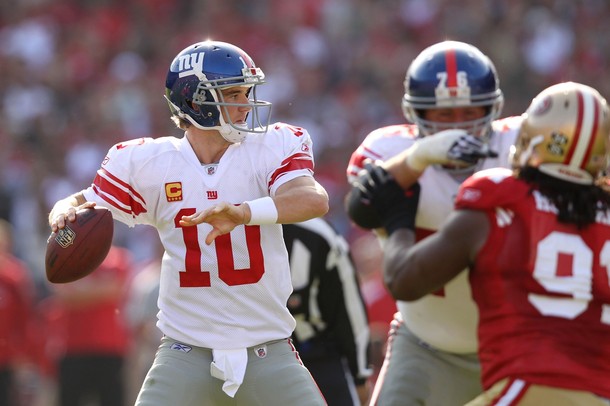 29. That is the number of points Eli Manning and the New York Giants put up on the Eagles in Week 3. It was a number large enough to end the Birds’ six- game win streak against Big Blue. It was also the second of what would become four consecutive losses for the Birds. But it really should not have happened. The Eagles threw and ran for more yards and had more first downs, but New York got the victory.

The reason? Well there are the same reasons that have plagued this team all year. Coincidentally, the reasons for the loss also provide the blueprint on how to slow down the NFL’s eleventh-ranked offense. If Juan Castillo and the defense can get pressure on Manning, prevent big plays, and cover running backs out of the backfield, look for the Birds to be in a winnable game.

Getting Pressure on Manning

The easiest way to slow down the G-Men is by pressuring their mistake-prone signal caller. Manning led the league in interceptions thrown last year and has eight in nine games this season. He has only been sacked sixteen times all year and is on pace for the best statistical season of his career. In the last two weeks, though, Manning has had two of his three lowest passer ratings of the 2011 season. Make no mistake; wreaking havoc on the Ole Miss product is the key to winning this game.

In the Week 3 matchup, the Eagles sacked Manning twice, but failed to consistently produce pressure. Defensive ends Trent Cole and Jason Babin had a sack a piece, but got no help elsewhere. Castillo’s group allowed the Super Bowl champion to throw for over 250 yards and four touchdowns. They also failed to create any turnovers, while committing three themselves.

This time around, the coordinator should dial up blitzes in order to frustrate the quarterback. In stark contrast to years past, the Eagles are one of the league’s least-blitzing teams. Several well-designed blitzes could be a great opportunity to fluster Manning and make a big play on defense. If the Birds are able to get to Manning on Sunday, it will make the job of the secondary much easier and give the team a great chance at winning.

If the Eagles did not allow the Giants big play after big play in their first matchup, the outcome would have been much different. Big Blue jumped out to a 14-0 lead on touchdown passes of 40 and 74 yards to Brandon Jacobs and Victor Cruz, respectively. The plays happened due to a combination of blown coverages, missed tackles, and matchup problems. Castillo must make sure his squad limits these types of plays that can change the game in a heartbeat. He needs to take after his boss and put his players in a better position to make plays.

In order to keep the Giants’ explosive offense at bay, the Eagles must tackle. As simple as it sounds, anyone who has watched this team knows it can come and go. On Cruz’s 74-yard scoring strike, inexcusable missed tackles by both safety Kurt Coleman and cornerback Nnamdi Asomugha allowed the wide receiver to run untouched into the end zone. After a week of watching game film of these mistakes, the hope is that the team will come into this game ready to hit.

The Giants took advantage of inexperienced Eagles linebackers in the first matchup by using their running backs as receivers. Jacobs, who is 6’4’’ and 240 pounds, started off the scoring with a 40-yard touchdown catch. Rookie Casey Matthews, who is no longer in the starting lineup, was burned on the play. New York’s other running back, Ahmad Bradshaw, lit up the Eagles with five receptions for 53 yards and a touchdown.

With a new line backing corps and more experience, look for the defense to be much better prepared to deal with Jacobs and Bradshaw coming out of the backfield. Brian Rolle and Akeem Jordan, who were not in the lineup Week 3, should improve the coverage ability of the linebackers and help the Birds take these dangerous backs out of the game. By eliminating Manning’s security blankets, it gives the defensive line more time to put pressure on the gunslinger and take over the game.

Although the Eagles’ season seems to be coming to an unbelievably early end, the team must put together one last stand against their division rivals. Following an embarrassing loss to the Cardinals last week, look for the defense to set the tone on Sunday night. Every key to shutting down the Giants is related to one another. Taking the team’s running backs out of the game allows the defensive line to get more pressure. If Trent Cole and the defensive line get after Manning, Asante Samuel and the secondary can prevent big plays.

If the Eagles finally step up and play up to the level of their talent, they should win this game and keep their faint hopes of a meaningful season alive. But if you think the team is done no matter what, just remember one thing. It always feels darn good to beat the New York Giants.