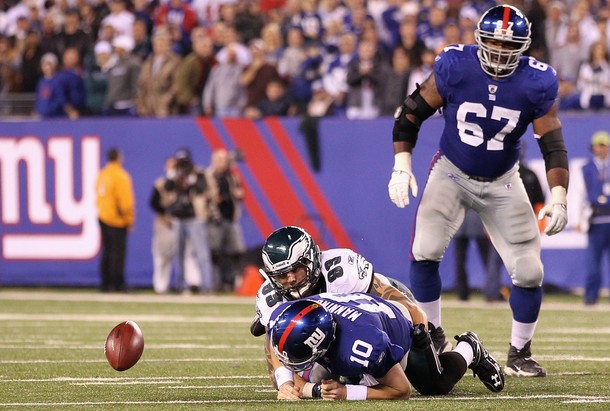 In the back of everyone’s mind this week, at least for me was how the Philadelphia Eagles pass defense would do against the “Elite” Eli Manning and the New York Giants. Well, it didn’t take long to find out. After the initial possession,  It seemed that perhaps there might be a rebroadcast of The

Victor Cruz show after an 18-yard reception early in the first quarter gave me the feeling that the quarterback and wide receiver might get in an early groove. NOT! That’s all we would see out of Cruz in the first half.

But the way the season has been going, there was an eerie expectation that something bad is about to happen but then Jamar Chaney intercepted a Manning pass and the rest of the Eagles defense began to play hard hitting, aggressive football. Nnamdi Asomugha got into the act knifing down backup running back Da’rel Scott causing him to lay the ball on the ground. The Giants would recover but the Eagles “D” established themselves early.

Consistent pressure from the defensive  line for the first time in two games helped rejuvenate a secondary that has been the brunt of criticism for much of the season. Juqua Parker, just back from a long bout with an injury sacked Manning just prior to the start of the second quarter and as a unit the DB’s more than held their own the entire first half.

Manning though, was let down early and often by dropped passes, particularly tight end Jake Ballard who would be wide open  on two occasions only to watch the ball go right through his hands. And while playing pretty decent coverage, Asante Samuel got away with one as Hakeem Nicks couldn’t come down with a Manning pass on the right sideline.

New York to 19 rushing yards in the entire first half and only 20 more for the rest of the game.

With Dominique Rodgers-Cromartie out because of a high ankle sprain, Joselio Hanson regained his “Nickel” spot and played very well. Actually, the only criticism is on my man Nnamdi. He does a whole lot of grabbing and with good reason, all too often receivers are getting behind him. What’s up with that? Seems he’s gotten away with a lot in Oakland but he’s getting put on blast an awful lot since signing with the Eagles. On a very critical play he was flagged for a penalty while it appeared to be an uncatchable ball.

The hope in the second half was that we would pick up where we left off in the first. Then, almost expectantly, at 12:23 of the fourth quarter, Hakeem Nicks caught a ball from Manning for 43 yards with Eagles leading 10-3. Could the Eagles hold onto a 7-point lead? Once again… No. After what appeared to be “technical difficulties”, The Victor Cruz Show resumed as he badly victimized Mr. Asomugha once again, scoring on a 24-yard touchdown.

Before you knew it Cruz was starting another episode of his show by doing the “Merengue” in the endzone.

Then we all got to see something we probably haven’t seen before. With six-3rd down conversions in the winding minutes of the fourth quarter, the Eagles offense led by Young, kept Manning and crew off the field with an amazing eighteen-play, eight minute and 51 second drive that culminating in a Riley Cooper touchdown catch.

Okay, under two-minutes remaining and the Eagles have the Giants pinned inside their own 10-yard line… nail biting time. Manning was called for

an obvious intentional grounding call but then hit Hakeem Nicks again for a 17-yard completion.

Then, welcome back to The Victor Cruz Show! Mr. Cruz beat Kurt Coleman’s coverage for 47-yards, giving him a 6-catch 128 yard night as I started to get that feeling again… uh; we’ll be right back after these words from our sponsor…  I sat during the intermission wondering what awaited the Eagles and their fans.

Would we witness another episode of the same show which saw Cruz victimize Asomugha or Coleman in the first Eagles and Giants match up?  Would Juan Castillo’s defense destroy what had been an outstanding performance with the defensive line tiring out and the secondary blowing coverages?
To our surprise the writers of the show abandoned that story line, as Manning drops back in the pocket at the Eagles 21, he’s looking… he rolls right… BAM!  Defensive end Jason Babin catches Manning from behind on a sweet spin move forcing the ball to come out! A ball that defensive tackle Derek Landri would pounce on to clinch the game!

A big-time play, from a big-time player at a very big time! There would be no fourth quarter collapse on this night!

Fella’s, ya done good! I don’t know what is going to showing in its place, but until further notice, The Victor Cruz Show has been canceled!

Passing Attack Comes Through Against Giants “D” Stacked Up For McCoy

Vince Young Leads The Drive Of The Season

Hey I told you guys the Eagles would pull this one out, just like I thought they would over the then hot Redskins, and surging Cowboys! Don’t know about the rest of the season for the Eagles it depends on their fortitude towards manning up. I will say this, the Giants are about to take a hard slide, and the Cowboys are going to hit the wall. So listen in a Seahawk “2010” kind of way here we go. There is no wildcard waiting for us, we have to take the master’s chair for the division, we can do it not so much becasue of us alone, but becasue everyone on the giants schedule now knows how to beat them, they are done.

What scares me most is Reid, MM, and if the players show fortutude of heart and come with their head and instinct in the game. That my friends is what has me worried.

We all suspect the reality of what is to come, but still don’t lie it feels good to have some hope doesn’t it…..huh? don’t lie, its our team, was ours before Reid and will be ours after, so a tiny hope is a good hope.

As always LONG LIVE THE EAGLES

PS I no the real deal boys, don’t Piss on my dreamy moments to enjoy the rest of the season…LOL Peace!!!

Yes you did Mono,
You have been right 40% so far this Season (4-6), just like the EAgles…ha ha
Was a great game to watch and I have to admit, I enjoyed this game more than any onher game so far this Season, Thay played hard,fast, with attitude and just weren;t going to be denied… I expect another peak performance next week versus the Pats..and now I think it’s safe to say that Vick will be fired up and will step up his game to keep this going