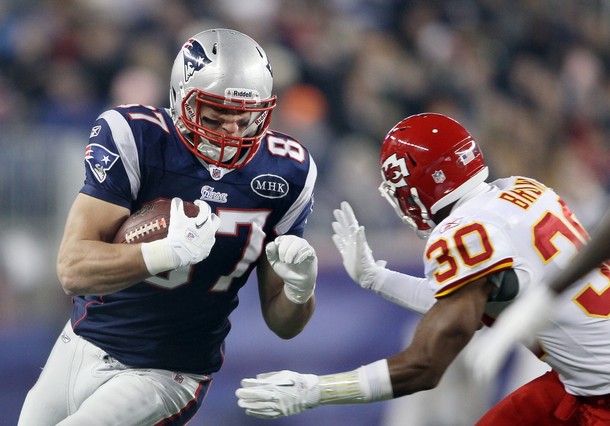 After a season-saving win against the Giants on Sunday night, the Eagles have another do-or-die game against the New England Patriots this week. Tom Brady brings the number two-ranked offense into Lincoln Financial Field riding a two game win streak. The last time Belichick, Brady, and company came to Philadelphia in 2003? They destroyed the Birds 31-10 and left Andy Reid grasping for answers. If the head coach hopes to defeat the Patriots for the first time since 1999, his defense will need to stop the most prolific tight end combination in the league, Aaron Hernandez and Rob Gronkowski.

Hernandez is a less-prototypical tight end that uses his speed to take advantage of slower defenders. His 6’1”, 245-pound frame is unassuming, but it is a mistake to forget about the second-year man out of Florida. New England loves moving the Connecticut native around, using him on the line and in the slot. His versatility has helped him accrue 41 receptions for 418 yards and five touchdowns this season.

In order to stop Hernandez, the Eagles must use a safety to cover him. Despite coming off their best game of the season, none of the Birds’ linebackers can cover the dangerous tight end. And with Joselio Hanson and Dominique Rodgers-Cromartie busy with Wes Welker, Kurt Coleman and Nate Allen will be stuck with task of defending number-81. Make no mistake; this is no Jake Ballard here. If Coleman or Allen is not able to shadow the quick tight end, it could be a long day for the Eagle defense. Unfortunately, for Juan Castillo’s group, Hernandez is not even the best tight end on his own team.

Rob Gronkowski
The Patriots’ other tight end has also become one of the most dangerous receiving threats in the league. Only two years removed from Arizona, Gronkowski has been unstoppable lately. The 6’6” mammoth has over 300 yards and five touchdowns in his last three games. For the season, the New York native has torched defenses to the tune of 56 receptions, 805 yards, and ten touchdowns. While it is doubtful the Eagles will totally shut him down, it is possible that they could keep him in check.

For the Birds to successfully slow down the Patriots big and athletic tight end, the linebackers must build on last week’s success. Despite lacking the

size needed to match up with him, Jamar Chaney and company do have the speed. Brian Rolle and Akeem Jordan will be counted on to use their quickness to cover number-87 one-on-one. Look for Keenan Clayton to get more time against the Pats’ spread offense, too. After shutting down the Giant’s offense, the much-maligned linebackers need to step up once again in this one.

In the biggest game of the season, the Eagles face perhaps their stiffest test. New England enters the game with an AFC-best 7-3 record and a quarterback and coach both destined for Canton. Can the Eagles beat the Patriots? Certainly. Will they? That’s another question. But never underestimate a team playing with nothing to lose. If the defense can slow down Tom Brady’s explosive passing offense, the Eagles will be in a winnable game. And although Andy Reid has had little success against the Patriots, look for the Eagles to play like the desperate team they are and keep it close.

DeSean Bringing Some Attitude To This Offense Is A Good Thing

Belicheck will have a game plan to slow down McCoy and force Young to bear them downfield….expect some early turnovers by the Eagles and a fast start by Tom Brady and the Pats offense…. they will jump out on front 14-0, the Eagles will attempt a comeback but fall short 27-21. The other tightend, Hernandez, not Gronkowski, is going to cause the Eagles fits in coverage.

we have the worse zone in the league yet we continue to play it on 3rd downs . if we cant get off field on 3rd down we lose. if we can hold them on 3rds we will win.

We must run the ball and win the time of possession. We are due to win a game at home. I’m glad no one is giving us a chance so we can prove everyone wrong. I feel our defensive line will put some heat on Brady. We can win if we can hold the Pats to 24 points or less. Maclin, Desean, Celek, McCoy, and Avant must bring their A games. If we catch the ball and make tackles we will be fine. Birds 31 Pats 24!!!!!