With The Lockout Over, What Can We Expect From The Sixers 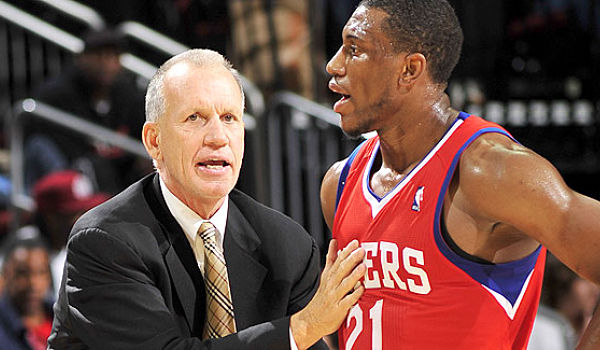 Share/Bookmark
With the NBA back in business, questions abound for the Philadelphia 76’ers who are under new ownership and are looking forward to building on the success of last season. The Sixers are still cap-strapped as the league salary cap remains at $58 million.

However, there is an amnesty provision that would allow the team to kick one players salary to the curb (I know who you guy’s are thinking about!) that would not count against the salary or luxury tax and does not have to be used immediately. This really benefits teams that are below the cap and have managed their finances well.
For example: If the Cleveland Cavaliers use their amnesty provision on Baron Davis, a team that is $5 million below the salary cap can submit a $5 million offer to acquire Davis’ contract. If that offer is the highest, the team acquires Davis and is responsible for $5 million of his salary — with Cleveland responsible for the balance. This happens before Davis becomes a free agent and can sign on his own with a team like Miami or Los Angeles.
The Sixers current salary structure stands at $54.8 million (minus rookie contracts) if everything remained intact.

The same questions remain for a team that finished 41-41 and won a playoff game against the Miami Heat in the first round of last year’s playoffs.

Do the Sixers re-up Thaddeus Young? Young along with Lou Williams sparked the Sixers bench and was effective at both ends of the floor playing either the “three” or “four” positions. The math is simple here.
What happens with Andre Iguodala? The last regime was ripped mercilessly for “overbidding” for the talented guard/forward. Coach Doug Collins has stated that Iguodala would not be dealt and that stood through the NBA Draft. If the team drops his $13 million salary under the amnesty provision, Iggy’s next team will more than likely get their moneys worth. I’m not sure the Sixers can say the same
Do the Sixers hang on to Elton Brand for another season? You guys remember that I beat the drum for Brand and his $17 million salary as the season ended, not so much for his play but for his leadership. Brand played with a broken hand for a month and provided leadership on the floor and in the locker room. I know the price for Brand is steep, but this is a young team and Brand has been a player that I believe the new ownership will look favorably upon – at least for one season.
Was the Sixers decision to go “Big” in the draft a smart move? The Sixers chose Nikola Vucevic with the 16th pick in last June’s draft. With the possibility of losing center Spencer Hawes to free agency snagging the 6’11” Vucevic looks like a decent pick up provided he can continue to score and rebound. Vucevic played in the EuroLeague during the lockout posting good numbers. The selection of Temple’s Lavoy Allen should serve notice to Marresse Speights.
Can Evan Turner improve on his rookie season? Let’s be frank, we didn’t get what we expected from Evan Turner last season. The second overall pick struggled at times while at others (particularly the playoffs) gave us a hopeful glimpse into what he can become. Turner was scheduled to work with shooting guru Hall of Famer Herb Magee over the summer.
Is Jrue Holiday poised to breakout? After having his way with the Miami Heat in the playoffs, I think it’s safe to say Holiday is well on his way to becoming one of the best point guards in the NBA.
Is Doug Collins the right man for the job? Collins didn’t wilt after the hellacious start last season, Collins dealt with health issues and a return to the rigors of NBA coaching to bring the team to a .500 season and a renewed interest from the fans. With a young team Collins is allowed to teach and share some of what he’s learned as a player with players like Holiday,Turner,Williams and Young.

Pronger’s Injury May Require Outside Help

Amnesty Brands @$$ out of here, trade Nocioni & Igoudala & his Pete Puma under-bite outta here, PLEASE!!!!! Go young, rebuild & start over! We ain’t winning a championship anytime soon anyways. You need to play Turner, Young & Holiday together & let them gel. Last year Nocioni & Igoudala killed all growth, & playing time for Young & Turner. Igoudala is the most over-hyped, overpaid & overrated player, I can remember in this city. He is another person, who’s expiration date has expired 3 years ago.

@DCar, if they can pull off a deal for Iggy and Nocioni that would be great. If they dump Brand’s $17mil this season they can get 2 good players that can help this team. I want to see ownership make a commitment to winning early on.

As for Thad young, the math is not that simple. He is a restricted free agent and there is some possibility a team offers him upwards of 10 million dollars.

While I love thad, he is a tweener who can’t afectively guard 3s or 4s. In addition, he is not an effective defensive rebouder, has almost no outside jump shot and continues to overhelp on defense.

While I like the guy I am not convinced he has the game to be a starter at the NBA level and if you think Iggy is overpaid now (since he doesnt’t score 20 points a game) wait until thad gets a big deal. He is a hustle player and a good offensive spark.

When you write artcles about resigning people you need to talk about the dollars you expect them to get.

Well, 10 million may be pushing it but 8 or so is a good possibility and matching an offer of that size is in no way automatic.

I believe their qualifying offer to Young is somewhere between $3.5 – $4 mil. range my ceiling would be about $7 mil.

Good stuff Ron, agreed on 7 as a ceiling. I am just a bit nervous someone goes higher bc he is still only 23.

That’s where this become painful because he’s a big part of the teams success and someone could blow him away with a $10 million deal that he’d be crazy to say no to.