After Poor Game Vs. Pats, Eagles Secondary Should Be Able To Handle Seahawks 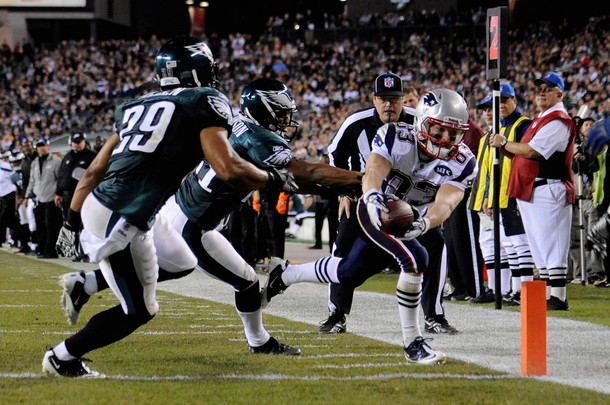 Going into last Sunday afternoon’s contest at Lincoln Financial Field, it was all too apparent that the Tom Brady-led Patriots passing offense was a force with which to be reckoned.  Before the day started, the New England passing attack ranked 2nd in the NFL with 315.7 passing yards per game and was completing passes at a 65.4% clip (253/387).

A relatively porous Philadelphia Eagles pass defense, on the other hand was 12th in the league, allowing 222.5 passing yards per game, had given up 18 passing touchdowns, while allowing opposing quarterbacks to complete 57% of their passes.

Philadelphia has had major issues maintaining adequate coverage all year long, especially when the linebackers have been forced to cover anyone from the opposition, in particular tight ends.  This was a recipe for disaster from the outset, considering that the Patriots have two of the premier, young tight ends in the league in Rob Gronkowski and Aaron Hernandez.  The Patriots tight ends and the Eagles pass defense both lived up to their reputations, with the Eagles permeable defense allowing Gronkowski and Hernandez to combine for 10 receptions that equated to 121 yards and a touchdown.

Brady turned in yet another impressive performance, completing 24 of his 34 pass attempts for 361 yards and three touchdowns.  He seemed perfectly content in taking what the defense gave him, completing the majority of his passes on short to intermediate routes.  The Eagles had no answer for the mid-range crossing routes that New England is known to employ.

Brady and the Patriots did an extraordinary job turning screens and passes to the flat into significant gains.  Philly simply couldn’t get off of blocks to make a stop when it was necessary.  With that being said, the former sixth round draft pick was not afraid to take the occasional shot down the field when it presented itself, connecting on the majority of those attempts as well.  Perfect examples of this were the 24-yard dart that Brady threw for a touchdown to Gronkowski, who had gotten inside position on Joselio Hanson and the 41-yard strike to Welker that resulted in yet another touchdown.

On New England’s first three offensive possessions, the Eagles actually managed to get pressure on Brady, hitting him 5 times, including a sack by Mike Patterson.  After those three possessions, however, the Patriots moved to a more up-tempo no-huddle offense and Brady seemed to have all day to move through his progressions and find an open receiver.  You can’t give any quarterback in the NFL the amount of time the Eagles afforded Brady, let alone one of the elite quarterbacks in the history of the game.

The lack of pressure on New England’s Pro Bowl signal caller for 3 quarters of the game allowed him to attack the Philadelphia defense in a surgical manner, as he is so well equipped to do.  Whether the Eagles were brining 5 or 6 men or simply rushing four, there was no pressure put on Brady.  In order to disrupt the New England passing game, you must get pressure on Brady as well as jam the receivers at line so throw off the timing of their routes.  As a defense, if you are not getting to the quarterback and are playing zone, the Patriot offense will carve you up like a Thanksgiving turkey.

As usual, there were several instances where the Eagles absolutely blew their coverage assignments, in addition to the myriad of times when they simply got beat (see:  Gronkowski, Rob in the Red Zone).  In the 2nd quarter, safety Nate Allen bit on a Brady play fake and wide receiver Wes Welker was left wide open running down the seam, where Brady found him for a 41-yard touchdown.   On another long pass play, the secondary blew a coverage which left Deion Branch wide open for a 63-yard pass play to set up a touchdown.

Both the Eagles pass defense and the Patriots passing offense did basically what was expected of them:  Philadelphia blew coverage assignments,

looked ridiculous biting on play action fakes, failed to get any noticeable pressure on the quarterback and allowed their zone scheme to be exploited.  At the same time, Tom Brady and the Patriots decimated a weak defense and moved the ball at will.  There are a great number of things this Eagles team must figure, but above all there needs to be a return to disciplined football.

The Seattle Seahawks aren’t nearly as potent as the Patriots, but the Eagles defense had better be ready to play football.  Hard running back Marshawn Lynch will be the guy to stop.  He’s the main threat in the Seahawk offense.

Current starting quarterback Tavaris Jackson has taken his mediocre play from Minnesota to Seattle.  He still isn’t a quality quarterback and is playing with a pectoral injury, so the Birds need to stack the box to stop Lynch and dare Jackson to beat them throwing the football.  Top wide receiver Sidney Rice has been battling injuries and hasn’t played well, so daring the Seahawks to throw the ball seems to be the right way to go, except for the Eagles secondary.

Hopefully the Eagles can manage to execute their coverages without leaving receivers wide open on Thursday night.  Unfortunately, they played so poorly against the Patriots that there’s no guarantee.

Seahawks Defense Is Better Vs. Run Than The Pass, You What That Means

Like the way they handled Hall Of Famer John Skelton, or Alex Smith??

Why do you writers insist on trying to predict an Eagles win based on pure speculation when the Eagles have proven through their own inconsistencies they can’t be relied on from week to week?

Watch for Sppedster Doug Baldwin for Seattle as he hs been their big play man averaging about 16 yards per catch and has 15 catches over 20 yards..
They also have underrated Ben Obomanu, GOlden Tate and Mike WIlliams so their WR Corp will still give the Eagles Secondary fits since every team does
(check the Bears, Cardinals and Pats WR Corps versus this Soft Defense)

Defensivley watch for the LB I wanted the Eagles to select last Draft in KJ Wright along with DE Chris Clemmons, DT B Mebane, and Safeties Earl Thomas and Kam Chancellor.. This Defense is as talented as the Eagles

I hope the Birds beat Seattle not for the coaches for the players. I know some of our players have played poorly, however, I blame this mess on the Front Office and Andy Reid. We should have addressed DJax’s situation before the season and Andy still refuses to Run the ball. We had one chance against the Pats to Run the ball and control the clock and once again we don’t utilize McCoy. This pass happy trend is the main reason he should be fired and why we won’t make the playoffs. Its time to bring in a coach that we call the game right and get the most out of his players. Even if we win these last five games its to late because Dallas will now win the division with their three game lead. Once we Fire Reid please tell Juan to go with him because we definitely need a new DC. Time Yours!!!!!

Not if DRC & Asomugha ain’t playing, they’re not. Samuel blows & Hanson is still recovering from his third degree burns from last week. BTW, where are all of the turnovers, for this DF!? This might be the worst season in recent history that the turnover +/- ratio is at it’s worst. At this point I’d be happy with just a tackle. Sweet, Jeebus!