LeSean McCoy Continues To Shine For The Birds 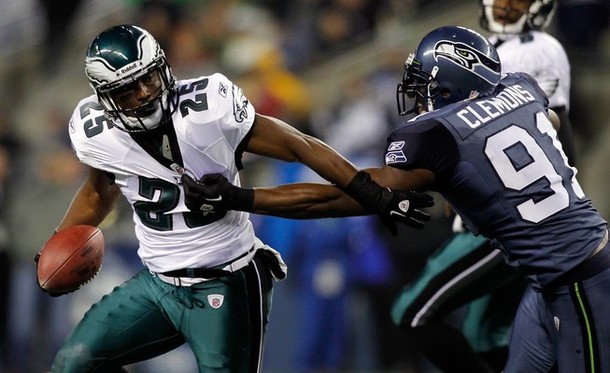 Once again, the Eagles come out of a game with a disappointing loss and fall to 4-8 on the season. This one perhaps the most disappointing one yet. With the Eagles in desperation – having to win out and get help from the Giants and Cowboys to make the playoffs – the same heartless, uninspired team that we’ve seen so much of this year showed up in Seattle.

Once again, the lone player that showed up to play was LeSean McCoy.  He accounted for both of the Eagles touchdowns while essentially playing on one foot. Hampered by a toe injury all week long, McCoy was limited in practice and was officially listed as questionable for Thursday night’s game.

The Eagles quickly fell behind by two Marshawn Lynch touchdowns. Down 14-0 early in the second quarter, the Eagles were again forced to rely on Vince Young’s arm to come back. With just seven carries in the first half, McCoy was able to score the Eagles first touchdown to bring the Eagles within seven.

Shady finished the first half with just seven carries for 36 yards and the only Eagles score. A statistic that doesn’t show up on the stat line is McCoy’s blocking. On the majority of Vince Young’s pass plays, McCoy threw key blocks that allowed Young to have time in the pocket to deliver passes, which he failed to do on twelve of his pass attempts.

At halftime, something clicked in Andy Reid’s head. The Eagles came out with four of their first five second half plays going to the 23 year old running back. In those five plays, he accumulated 32 yards and set the tone for the second half. Shortly after the tone was set, Vince Young tossed his second interception of the day giving momentum back to Seattle.

Number 25 played an important role in the passing game besides just blocking. His 49 yards on four receptions was his highest receiving yardage total in a game this season. His second touchdown of the day, and fifteenth of the season, came on a goal line shovel pass from Vince Young. The

Eagles had a great setup with McCoy and fullback Owen Schmitt in a split back formation. One of the many geniuses of Howard Mudd’s offensive line play was the reason Shady was able to punch it in for a somewhat easy touchdown.

The turning point of the game, and the final blow to the Eagles season came on a pass intended for McCoy. Seahawks linebacker David Hawthorne was draped on McCoy and Vince Young tried to force the pass to him. Hawthorne intercepted the pass and returned it 77 yards in the opposite direction for the interception. The team player that McCoy is, of course he took responsibility for the poor decision Young made to force the ball to him.

“That’s my fault. I need to be more aware at all times. You never know if he’s going to throw it or not,” said McCoy of the play. DeSean Jackson could take some notes on this after what is possibly the worst showing by him in his four years with the Eagles.

Still, with 49 yards through the air and 84 on the ground, the former Pitt Panther had his ninth game with at least 100 yards from scrimmage. McCoy had nine 100 yard games all of last season.

McCoy’s 84 rush yards on Thursday night gave his a new career high in rushing yards in a season, previously 1,080 which he accumulated last season. Sitting at 1,154, McCoy has four more games to continue to add to his breakout year, which is on pace to take home the rushing title. He would be the first Eagles running back to do so since Steve Van Buren did it in 1949, his third consecutive title. He also only needs two more touchdowns to tie Van Buren’s franchise record for touchdowns in a season.