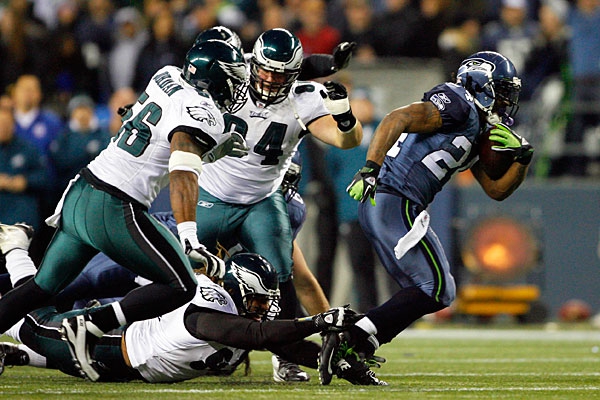 The Philadelphia Eagles, led by there defense said all week that they had their head coach Andy Reid’s back.  Well after the Eagles 31-14 thrashing by the Seattle Seahawks and the team looking like they just gave up and did not want to play, now have a lot of questions to answer.  The Eagles record is now 4-8 and any hope of making the playoffs is over.

This so called promising season has hit a season low for this team.  There are a lot of questions that need to be asked and after watching last nights game it will begin with the defensive unit.

Coming into the season there were a lot of questions about the hiring of the Eagles former offensive line coach, Juan Castillo as it new defensive coordinator.  He had  no experience number one but head coach Andy Reid was so impressed with Juan’s interview that he thought Castillo was the best choice.  The team really did not interview any other possible coordinator prospects.

At the time if seemed very strange.  Why not find the best possible person available. Was Castillo really the best person out there or were there other reasons why Castillo was interviewed and than got the job.

Thursday nights game against the Seahawks again showed that this team still can not make tackles and still looks totally confused out on the field. There were plenty of missed coverages too.  There is no excuse for any of this.  The players just look out of position and just clueless and that continued again last night.  The Eagles defense was embarrassed by Tavaris Jackson.  Jackson made the Eagles defense look silly.  The defense made him look like Tom Brady and Tarvaris Jackson is certainly no Tom Brady that is for sure.

The Seahawks running game last night ate up the Eagles defense as well. The Seahawks were led by running back Marshawn Lynch who just ran all over the Eagles. Lynch finished the night with 22 carries and 148 yards and a couple of touchdowns as well.

The Eagles just looked like they were not interested in playing.  They should no heart and desire. Lynch broke tackles all night long.  The defense had no answer for Lynch.

The system that this defense is running is no doubt not working. This cheerleader approach by Castillo does not work in the NFL.  Where is the desire and the sense of being embarrassed from the defense.  They are lacking pride and heart as well.  This is how you cover the back of your head

Let us see how it would be if you came out and said that you don’t have his back.  The play last night of the defense of the Eagles totally should tell all fans that the team does not want to play for its head coach and that it has totally given up on him and the season.

Each and every player on this defensive unit of the Eagles needs to look at themselves. The performance Thursday night by the defense is totally unexceptable and has been all season long.

The blame starts with the head coach Andy Reid and goes down to defensive coordinator Castillo.  Last nights performance is the final straw. Both Andy and Juan have to realize that the team and the defense do not want to play for either one of these two.

The defense needs to man up, show pride, and heart.  The fans of Philadelphia will not accept any thing less.  This defense was heartless in Seattle to the point of disgraceful.  The bottom line is this, there are four games left in the 2011 season. The playoffs are gone. Each man on the defense must show some kind of character, heart, and play with a sense of embarrassment.

The fans of Philadelphia want to see pride. The fans will not allow a team that  gives up and lays down.  That is not Philadelphia and the way we want our teams to play. To the defensive unit of the Philadelphia Eagles, the next four games is a time for all you to MAN UP.  Show some pride and desire and give the fans of this team what they deserve.  A solid effort and some pride.  Is that too much to ask for, maybe with this team it is.

LeSean McCoy Continues To Shine For The Birds