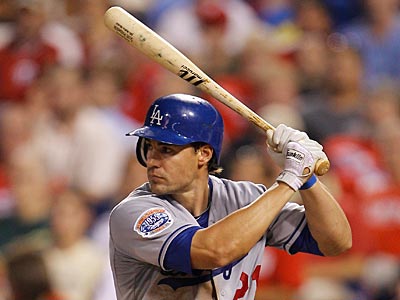 The Phillies announced Wednesday that Scott Podsednik along with seven others will join Charlie Manuel’s club in Clearwater this May as non-roster invitees.

Podsednik is the most notable name with a chance to prove his worth at Spring Training. The 35-year-old has manned centerfield for six different teams throughout his ten-year tenure in the league.

After being called up by Seattle in 2001, the journeyman made a household name for himself stealing a league leading 70 bases during his 2004 season with the Milwaukee Brewers.  In the years following 2005, injury plagued seasons left Podsednik with under 20 stolen bases, but he broke the funk  with 30+ stolen bases during both the ’09-’10 seasons.

The Texan’s career highlight came during the 2005 World Series, when the gritty leadoff man hit an unfathomable walk-off homerun in Game Two of the Chicago White Sox’s sweep of the Houston Astros. Ironically enough that once-in-a-lifetime homer came off of former Phillies’ closer, Brad Lidge.

All that glitters isn’t gold for the lefty who hasn’t played in the show since being sidelined with a foot injury during the 2010 season. Pods was inked by the Phils last May when Shane Victorino was placed on the disabled list but his numbers in the minors were anything but breath taking, a .254 combined average with eight RBIs.

His ability to steal only six bases last season can only be counteracted by the fact that the outfielder only played in 34 games last year. Non-the-less Manuel has invited Podsednik to try out for his squad come March.

Pete Orr will join Pods on the Phillies’ sideline, looking for a job this spring. Orr played in 46 games with the Phils last year, posting 21 hits and a .219 average.

The NL East journeyman has never been able to find a home in the pros and his lack of strength at the plate has a lot to do with that. After batting .300 as a rookie for the Braves, Orr hit a sophomore slump and hasn’t played a full season in the pros since.

The only thing Orr will add to the Phils roster is depth, he is a very good fielder; but other than that, he won’t be bringing much else to the table. Fact-of-the-matter I do not expect to see the Canadian second baseman rounding out the Phillies’ roster on opening day.

Brian Sanches has been given a chance to show management what he can do as well this spring. The reliever started his career in Philly, but after two seasons and a 5.75 ERA, he was banished to Washington. The former 2nd round pick, struggled in Washington but came into his own during a three-year stint with the Florida Marlins.

The righty posted a 2.92 ERA during those three seasons while recording a .500 groundout to fly ball ratio. Sure you’d like to see a higher ground ball ratio, but with a 3.2% homerun rate; I wouldn’t worry about Sanches giving up many home runs in relief.

Scott Elarton was invited to try out for the squad, but I think his gas tank is all but running on fumes. The righty had two solid seasons, during his ten year career in the pros (17-7 record in 2000 and 11-9 record in 2005).

Elarton has been playing in the minors since 2008 and for good reason. During his last season with over 100 innings pitched (2006), he lost nine games with an ERA above five.

Elarton is more than a long shot to make the team and if Sanches is being questioned; Elarton shouldn’t even be talked about.

Although most of these guys won’t fill the roster, I think Podsednik and Sanches can add some depth to the Phillies’ bench and bullpen respectively. And who knows maybe these guys put in an offense that will turn some heads this spring.