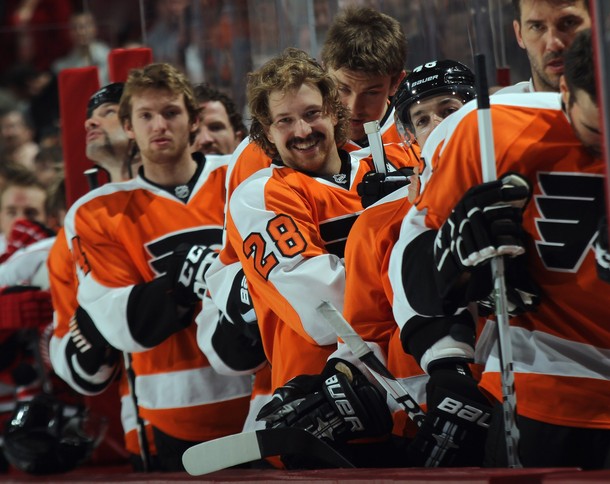 Tonight NHL officials approved a monumental radical realignment plan for the NHL that will begin next season. The realignment will consist of four conferences instead of the six divisions that currently exist. The plan still needs to be discussed with the NHL Player’s Association but barring disapproval from them the new plan will be approved. These changes came about in order to accommodate the move of the Atlanta Thrashers to

Winnipeg marking the return of the Winnipeg Jets to the NHL. The other option was to move one team from the Western Conference to the East but instead the NHL opted for more of a dramatic plan.

The breakdown of the new format will consist of four conferences. For now the conferences are being listed as Conference A, B, C, and D. No word has surfaced yet about any possible names for each conference but the breakdown is listed below.

The new plan will allow for each team to play a home-and-home series with every team in the league not in their own conference. Western teams will no longer need to travel as much and east teams will now have an opportunity to play out west more often than now as the plan is based primarily on geography. Under the current format a majority of the Western conference teams had to travel outside of their time-zones on a frequent basis.

The new format will put a stop to all the excessive traveling. Teams going west or east will now have more lengthy road trips to try to check off as many teams as possible so for instance the Flyers who just came off a trip out west to Play Anaheim and Phoenix will now want to add on another 3-5 games on such a trip to decrease the amount of trips out west. The bottom line is the back and forth to different times zones will decrease for clubs.

The four conference winners will then play each other for the right to advance to the Stanley Cup. The teams will be re-seeded making it possible for two teams from the east or west to meet in the Stanley Cup Finals as it was decades ago when the Flyers won back to back Cups in the 70s. Therefore the conference finals could in fact have an eastern team face a western team.

Originally I was opposed to this new format. The idea of not being able to face the Penguins or Rangers in the conference finals to play for the right to go on to the Stanley Cup will never exist again and that didn’t sit well with me. Also the possibility exists for a 5th place team in one of the conferences to have more points than a team advancing from one of the other conferences but when you think about it that makes conference play all that much more important going forward. The NHL did something right in all of this and kept the historic rivalries together. They actually gave us more rivalry hockey to watch in the long run.

Think about it, not only will we face our already existing division foes (Penguins, Rangers, Islanders, Devils) in the regular season but now you’ll have to face a rival in at-least the first two rounds of the playoffs. Also from a Flyers perspective we’ll now be able to compete against Alex Ovechkin and the Capitals more during the regular season and possibly the playoffs. This rivalry was already emerging over the past few years and it will be nice to see it given the chance to turn into one of the premier rivalries in the league.

From a hockey perspective fans will also get to see more of Sidney Crosby against Alex Ovechkin as well and almost assure a possible playoff series between the two every season. What more can you ask for than the chance to see the two best players in the league go at it every season for years to come. Sure Ovechkin is down this season but in the long run it will be nice to see the rivalry develop further.

We won’t see as much of some of the other Eastern conference teams such as Boston, Montreal or Buffalo but now the possibility exists to play these teams in the Stanley Cup Finals. The Flyers/Bruins rivalry is one that has gained a lot of momentum over the past few seasons so imagine the intensity if both clubs had a chance to meet in the Cup Finals at some point over the next few seasons. Also the new format will make matchups with these teams more of a special occasion then now.

Under the new plan the schedule will no longer be unbalanced. I for one enjoy watching the Flyers play out west and not every Western team travels to Philadelphia every season under the current format. Going forward the new format will give fans the chance to see every team at the Wells Fargo Center at some point during the season.

The plan isn’t necessarily perfect and it will have its flaws. For instance if the Flyers and Capitals finish with the most points in the NHL one season only one of them will be able to advance past the second round. You’re going to lose really good teams after the second round of the playoffs under this format but the bottom line is the competitive nature of the sport just went up a notch. Teams won’t be able to coast through the regular season any longer because they are fighting for four playoff spots as opposed to eight. Division games will mean more than ever before and the main reason I like this plan is the fact that historic rivalries stay intact all across the league.

The NHL is proving they are a sport not afraid to take chances and the new plan will increase the amount of competition throughout the league. Under the current format to many teams are coasting through the regular season and points don’t mean as much because eight playoff spots exist. With only four playoff spots available teams will need points and every game will now have more meaning during the regular season. The radical realignment plan will be a good thing for the sport in the long run. Not everyone likes change but for those of you not on board just wait. The NHL just became a lot more competitive and the intense division rivalries that already exist are about to get a lot more heated over the next few years. Sit back and enjoy the fun.

ESPN And Rest Of The National Media Need To Butt Out