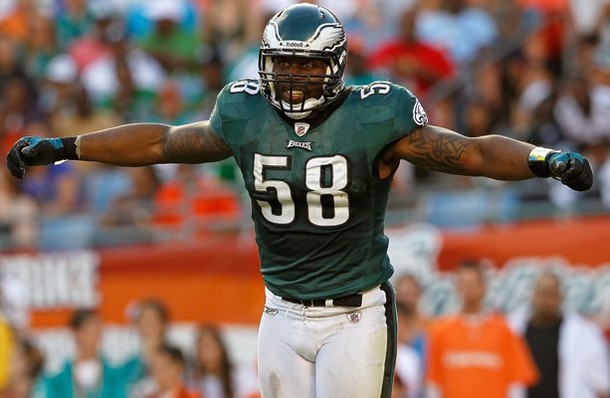 Nine sacks and three forced turnovers for the Eagles defense versus Miami.  The quarterback sacks kept the Dolphins off balance all game long, but it was the three turnovers and a safety which put the team’s offense in position to score and led to the victory.  It wasn’t a coincidence that the tunovers were forced in the second quarter of the game, which also happened to be when the offense scored 24 points.

The Eagles two Pro Bowl defensive ends Trent Cole and Jason Babin were hunting quarterbacks on last Sunday during the game against the Dolphins.  Once Pro Bowl offensive tackle Jake Long went down with a back injury, there was nobody in the Miami lineup who could stop either one of them.  They did any and whatever they wanted to do. The battle against the Jets will be a much tougher job because the New York running game must be stopped to force the Jets to throw the football.

Before the game was over, Cole and Babin each had three quarterback sacks.  I’ve said many times that the NFL is a passing league and most of the time, sacks of the quarterback kill drives and many times causes turnovers as well.

“It lets me know that those plays probably helped those drives, because when you’re sacked, it’s a drive killer,” Babin said. “If you look at the percentages, if that helps the Eagles win, I’m happy to do it.”

Babin now has 15 sacks this season, while Cole has nine.  If Cole can get another one, the two pass rushers will be the first pair of Birds defensive ends to reach double-digits in the same year since Reggie White and Clyde Simmons back in 1992.  They will be the first pair of Eagles defensive linemen to reach double digits in sacks in the same season since Eagles defensive end William Fuller and defensive tackle Andy Harmon were able to each come down with at least ten sacks in 1995.  It’s not an easy accomplishment.

They’re not getting a great deal of help from the Birds defensive secondary.

This week during the Eagles-Jets game, we’re going to get the chance to see Nmandi Asomugha on one side and Darrelle Revis on the other.  There was a time when experts were arguing whether Revis or Asomugha was the best cornerback in the NFL.  I don’t see how that argument can be made anymore.

I’ve rarely seen a cornerback look so awkward and unathletic as Asomugha.  Did you see him on the touchdown pass to Brandon Marshall?  If he had turned and looked for the football, he could have picked it off.  Asomugha isn’t comfortable doing anything but rolling up in the face of wide receivers and jamming them when they try to come off of the line of scrimmage.

Big plays by both Babin, Kurt Coleman and Asante Samuel proved to be the key plays of the football games.  Babin stripped Matt Moore of the football and the Birds recovered.

Coleman picked off a pass and took down to the Dolphins one-yard line, to set up a score. It was his fourth interception of the season.  The interception was caused by Darryl Tapp’s pass rush.  Tapp’s pass rush also helped Phillip Hunt record a safety in the second half.

Samuel stripped a Miami receiver of the football, then recovered it to put the Eagles in position for another score.  Samuel who isn’t known for his tackling did a great job of getting the football out of receiver’s hands, then getting on the football.  It was a great play.

Babin’s pass rush got the ball back for the Birds after rookie cornerback Curtis Marsh fumbled on a throwback play involving DeSean Jackson.  Babin came inside on his pass rush and went for the football.

Looking Back At NFL Weekend And Ahead For MLB And NBA

Is The NBA Confusing Right Now Or Is It Just Me?