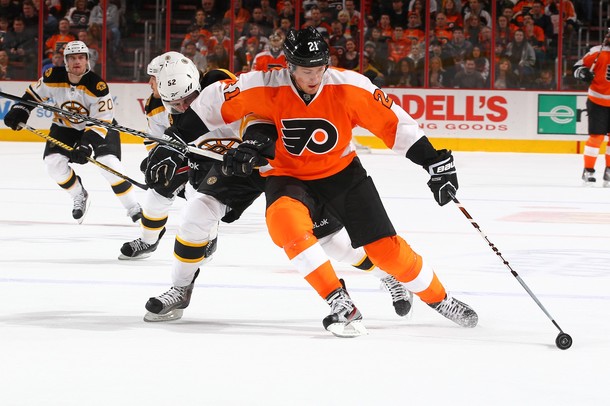 During last season’s short but eventful playoff run, chants of “J-V-R! J-V-R! J-V-R!” thundered throughout the Wells Fargo Center as the forward who goes by those initials dominated Sabres and Bruins defenders and made them look like they were still in their local Peewee league. The Flyers’ highly touted power forward had finally claimed his territory.

After that playoff domination where he scored seven goals in 11 games, the Flyers rewarded James vanRiemsdyk with a six-year, $25.5 million contract extension this past summer and, in turn, placed their faith in the young star winger. Now, with the rash of injuries, especially Claude Giroux’s concussion, the Flyers need JVR to get back to that imposing form more than ever.

As of December 20th, vanRiemsdyk has eight goals and ten assists on the season. Not bad, but those aren’t near the kind of numbers Flyer fans and brass are hoping for after that big offseason deal. His statistics and play of late have been even more alarming.

JVR hasn’t scored a goal in his last eight games. Save for his dandy shootout goal Monday night in Denver, he hasn’t potted one since November 21st, nearly a month ago, against Carolina. He has only two assists in those last eight games, his only points in Giroux’s absence. To make things sound even worse, vanRiemsdyk has only two goals in his past 14 games. Again, not the numbers or consistency Flyer fans and brass are looking for.

Toss those statistics aside; vanRiemsdyk’s style of play lately hasn’t been up to snuff. This guy is a six foot three, 200-pound brick-house with unreal jet-powered speed.

His combination of size, speed, and skill is nearly unheard of in today’s NHL and is what had Flyers’ scouts salivating when the team selected him with the second overall pick in the 2007 draft.

He is a guy that likes to have the puck on his stick and use that size and speed to carry it into the offensive zone. Lately though, it just seems that he is being pushed off the puck much too easily, even by smaller defenders. Either that, or he tries to pull off a move or force a shot that winds up being a turnover. He is forcing it way too much right now and, in turn, is hurting the team and it’s in game momentum.

Am I suggesting that #21 isn’t 100 percent and should be added to the long list of Flyers’ damaged goods? Not at all. I feel this is a mere confidence issue. Obviously JVR hasn’t been on top of his game lately. It doesn’t help his cause that Peter Laviolette is a coach that likes to ride the hot hand and reward those playing well. This isn’t something we haven’t seen before. Remember last season when JVR struggled and Laviolette made the young winger a healthy scratch? He is a streaky player and just needs that one moment to get back on the right path.

van Riemsdyk was supposed to be the Flyers’ power forward and towering net presence in front of the opposing team’s goaltender. Instead, that role has somewhat surprisingly gone to resurgent potential all-star Scott Hartnell. For as much grief as Hartnell receives from the Philly fan base for taking dumb penalties and lack of balance, Hartnell knows what his job is and does it well. He does the little things and is rewarded for his efforts in the stat columns. JVR should follow Hartnell’s lead and get back to doing the little things. It all starts with the little things, and once they come around, the roll begins.

Am I suggesting that JVR should be dangled in potential trades? Absolutely not. That would be the worst thing the Flyers could do. For one, he is only 22-years-old and hasn’t yet come close to what he could be. Plus, it could affect his confidence even more negatively and turn into a total downward spiral.

One thing is clear: JVR needs to pick it up with Giroux, the team’s leading scorer and superstar, out of the lineup. He is being counted on and, so far, hasn’t done much of anything in Giroux’s absence. I am confident he will turn things around. Flyer fans need to be confident in him too. All he needs is one moment. When that moment comes, the Eastern Conference and the rest of the NHL better watch out.