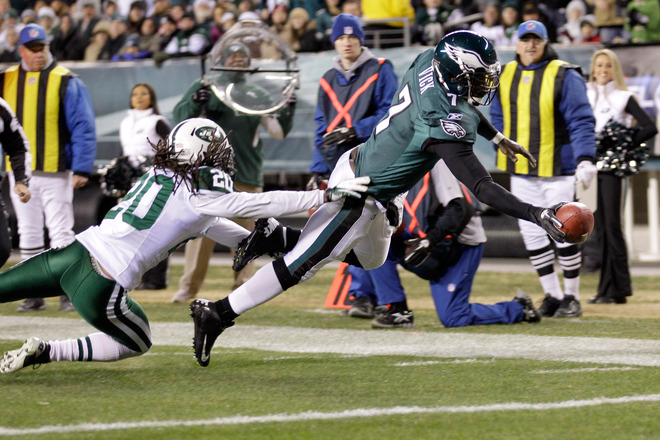 At (1-4) things were looking like a disaster. At (3-4) there was reason for optimism. At (3-6) it was definitely all over, yet at 6-8 there’s still life? Apparently so, and while being (6-8) after 14 games is hardly worthy of any praise, the Eagles have essentially risen from the grave, again, with the Giants’ and Cowboys’ inconsistencies, in particular, being key to their revival.

And now, what should the fans make of this? There is an old adage that may come to mind when considering the situation. The Eagles have given many reasons in the past to believe that the playoffs were a real possibility for them this year, and…things just never took off as they should have. Fool me once, shame on you, fool me twice, shame on me, right?

Well, not quite, by the time the Eagles kickoff against the Cowboys on Christmas Eve, we should all know who has won the battle of the New York. Should the Jets recovery from the torture they received at Philly’s hands last Sunday to beat the Giants, that will be the cue to cast all cynicism to the side and take on the hope of worthy of a playoff push, because that’s what the Eagles’ game will be.

Indeed a Jets win would open the door for Philadelphia to head into the last week of the season as division champion hopefuls. Amazing isn’t it? And while we could go for days marveling at the fact that there is still hope for this, let’s be honest, dismal season, an article is rarely ever complete without some sort of dissected numbers. So, here they are, the optimistic numbers for an optimistic weekend.

(0) The number of elite quarterbacks that the Cowboys have beaten this year, and while the word “elite” can be seen as subjective, perhaps a look at the QBs they’ve actually beaten will put things into perspective. In the games that they’ve won, Dallas has gone up against Alex Smith, in overtime, Rex Grossman, by 2, A.J. Feely, Tavaris Jackson, Ryan Fitzpatrick, Rex Grossman again, in overtime, Matt Moore, by 1, and Josh Freeman. In contrast, they’ve lost to a number of QBs which includes Tom Brady, Eli Manning, and none other than Vick.

(2-0) The Eagles’ record when playing away from home as the underdog, a role they’ll be playing when they enter Cowboys stadium this Saturday afternoon.

(5) The number of losses the Cowboys have in which they’ve led in the 4th quarter, a.k.a. reason for encouragement if and when all looks lost for the Eagles late in the game, as it did for the Giants two weeks ago.

(8) The number of sacks Jason Babin has had in the Eagles’ past three games. Babin had two sacks and two tackles for a loss the last time these two teams met. Speaking of which…

(34-7) The score by which the Eagles beat Cowboys in Week 8. It was a score that led people to believe that a revival was well on its way for the Eagles, that is, until they lost to the Bears and Cardinals in following weeks. Ironically, they may have the chance to inspire that same type of belief this weekend.

Jackson And Maclin Are Both Battling To Stay Healthy and Productive

Rob Ryans Defensive schemes have not worked for the Cowboys down the stretch this Season or against good Offenses..
His High-Risk, Blitz Happy schemes are just is not a fit with the Secondary players that the Cowboys have which is mediocre at best..
Last game vs the Eagles, he played both Safeties way back all game long to prevent the big pass plays and got chewed up in the running game by McCoy and Eagles OL. The Eagles were smart and took what the Cowboys Defense was giving them all game long.. I am sure that the Cowboys scheme will be a lot different than the 1st Match-up in which Ryan was completely out-coached and was fooled by teh Eagle’s patience.. If I am Coach MM and the Eagles Offense, I say 2 Safeties 20 yards back, I am pounding the rock with MCCoy.. When they bring the Safeties up, I hit them Deep

Celek is going to have another MONSTER game – wait – I finally get to do this – Celek is ‘licking his chops’ as the Cboys are one of the worst teams in the league at covering TEs – he had a good game the first go round and has really got it going now!

Hey – I haven’t seen any GCOBB standard cliche articles about Whitten ‘licking his chops’ or any articles on our LBs lately – what up wit dat?

This should be a blast – how much trouble am I going to get in for watching this one!

The best thnk I like Nave wtih both TE’s lined up outside the OT is that is allows the TE to block down on the DE and LT Peters pulls out to the left and cleans out the LB allowing a nice lane for MCCoy to pick-up an easy 8-10-12 yard and possible more if the WR’s get good blocks on the DB’s..

Sorry, I can’t seem to spell anymore
The best thing I like about both TE’s lining up next to the OT’s is ….

Navy…man you said it…..I will be at 7 Fishes at the In-Laws during the game….set up a TV table and eat & eat & eat….yeah, I will be in trouble. I better go buy an extra Christmas gift for my wife now!!!

I’ll be eating my 7-fishes on my Barco lounger, in the man-den, with my 3 boys, away from the annoying in laws, & other family members.