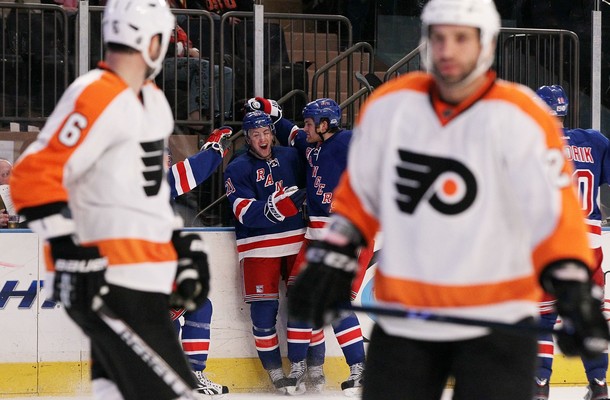 In the first meeting between the Philadelphia Flyers and New York Rangers this season, the Flyers were shut out in part because of the spectacular goaltending of Henrik Lundqvist.  The Swedish netminder wasn’t perfect tonight, but he kept the Rangers in control throughout the game, stopping 28 of 30 shots for a final score of 4-2.

At the other end of the ice, goaltender Ilya Bryzgalov played better than the final score suggests.  The first two goals against were redirections that began as shots from rookie defenseman Stu Bickel and were tipped in mid-air by Derek Stepan and former Titan/Phantom/Flyer Ruslan Fedotenko.  Both would have been difficult to stop for any goaltender.

The third goal began as a breakway for Marian Gaborik and ended with his 22nd tally of the season, which now makes him the league leader in goals.

Andrej Meszaros ended the shut out bid with a slapshot from the blue line and contributed on a late goal from James Van Riemsdyk, but he still finished with a -1 on the evening.

Following the loss, Bryzgalov now ranks 41st in the NHL with a save percentage of 0.895.  While some of that is certainly a reflection of his overall play this season, it also has a lot to do with the play of the defense.

The team is allowing 2.85 goals against per game (18th in the NHL).  Despite the off-season facelift, they are beginning to fall into the same trap they did last season- masking their defensive liabilities by scoring in bunches.

Guess where the Boston Bruins and New York Rangers rank in goals allowed per game? First and third, with 1.88 GA/G and 2.09 GA/G, respectively.  In Boston’s case, they haven’t had to face as much adversity as the Flyers have in terms of injuries, but the Rangers are missing Marc Staal (concussion), Michael Sauer (concussion), Steve Eminger (separated shoulder) and Jeff Woywitka (foot injury).

The defense is almost exactly the same as it was when the team was swept against the Bruins, and it’s showing on the box score.  On paper, the defense should still be an asset whether Chris Pronger plays or not, but as happens from time to time, “on paper” isn’t translating into consistent results.

On a separate note, Flyers beat writer Anthony San Filippo reported that general manager Paul Holmgren told Tom Sestito in the locker room that he was being sent back to the Adirondack Phantoms.  Sestito, who was credited with one shot and three hits, didn’t generate enough offense apparently to match Zac Rinaldo’s zero shots and one hit in spite of being trusted with over two minutes more ice time.

His demotion ultimately has less to do with his play and the fact that Danny Briere will play on Tuesday against the Tampa Bay Lightning.

The cameras on HBO’s second episode of “24/7” caught coach Peter Laviolette telling the team to let the 6-0 loss to the Bruins “burn.” Knowing that this loss allowed the Rangers to knock the Flyers off the top spot of the Atlantic Division, I hope he takes more of a “Mike Keenan” approach in firing them up for the Winter Classic.

Then again, Sam Carcidi of the Philadelphia Inquirer reported that the Rangers “blared” the song “Knock Knock” by Mac Millar (the song played after every Flyers win) after the game. The sheer arrogance and pomposity of the Blueshirts might anger them enough to bring out the hate without his help.

Eagles Dominate Cowboys, But To Jackson Next Year Is Out of His Control

No surprise here, The Rangers are the better all-around Team right now…..

I agree too: I was at the game to see Boston/Philly. I’ve rarely been to games where the Flyboys lost but that was excruciating. They played with absolutely no passion the entire game and were “out-physicaled” from beginning to end, plus Byrz was horrendous. Seeing the Rangers a couple times now it’s clear that they too are the better team. Flyers will have to suffer a while until most of the young guys/rooks learn to develop their game in high pressure situations… finesse doesn’t work in the playoffs.
There are a lot of good teams in the NHL this year and don’t see anyway this team, at its current stage, can get passed the 2nd round perhaps even 1st. Bryzgalov is certainly not worth the $$ they paid for him; Bob is much quicker in net and works to stay focused… personally I trust him more than the older Bryz at this point. Again, this team as comprised is not physically tough through all 4 lines, and the Pronger-less D can’t/won’t lay hard checks. They can dazzle on offense, but like in NFL, it takes a hard defense to shut down teams and progress through playoffs.