How Will Brent Celek Follow Up His Career Day Performance? 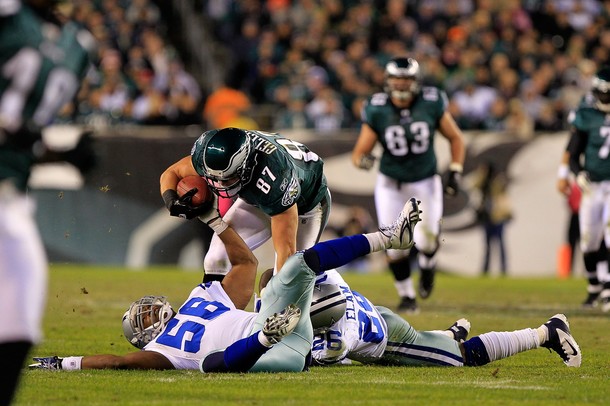 Last week against the Jets tight end Brent Celek had a career day catching 5 passes for 156 yards and one touchdown. His week 15 performance turned out to be the second highest total yardage for an Eagles tight end only behind Pete Retzlaff who hauled in 204 yards against the Redskins in 1965. How will Celek follow up this performance against the Cowboys?

During the first meeting of the season Celek had 7 catches for 94 yards and a touchdown. While I don’t expect another performance quite as good as last week I do believe it’s very possible for Celek to have another solid game against Dallas on Saturday in the 106th meeting between the two NFC East rivals. In 10 games against the Cowboys the 5th year pro out of Cincinnati has 28 catches for 393 yards and 3 touchdowns. Clearly Celek has been a factor against the Cowboys over the years and he has a chance to pad his stats against them again this weekend.

Coming into Saturday, Celek has 54 receptions for 673 yards and 3 touchdowns this season. It could have been a lot more if he was utilized earlier in the season but that wasn’t the case. Number 87 has had almost 2 different seasons in 2011.

During the first 5 games of the season he was targeted only 21 times and came up with 9 catches. In the last 9 games he’s been targeted 61 times and has hauled in 45 catches for 600 yards and 3 touchdowns. It’s been quite a turn-around for Celek since the early part of the season. Offensive coordinator Marty Mornhinweg commented on why Celek was slow to start in 2011.

“Early in the season, we had many plays where he was the number 1 but because of coverage, Mike’s choice, or maybe Mike got flushed or something the ball went elsewhere”, Mornhinweg said yesterday. “But Brent doesn’t say a word. He just keeps working and he knows he’ll have big games throughout the year.”

Celek himself never held his head down during the early part of the season regarding his performance. Earlier in the week he said “I can’t say it’s all just opportunities, because I think there were some opportunities at the beginning of the season. I had a few games where they would call my number a few times and there were just unlucky coverage’s. For a while, it was like that time after time after time but you’ve got to keep plugging.”

Celek is the senior leader of the offensive receiving core. He’s been around for the last 2 seasons of the Donovan McNabb era, the brief Kevin Kolb era and now the Mike Vick era. He feels he’s finally gaining rapport with quarterback Mike Vick. “The more Vick and I play together, the more we understand what we’re doing,” said Celek. “Doing it time after time, Mike gets to know how you run your route. I think we’re developing a rapport that’s pretty good.”

Surprisingly as much of a non factor as he was earlier in the year Celek still leads the Birds in receptions with 54. He doesn’t have the catches like some of the other big names tight ends in the NFC. Currently there are 6 NFC tight ends with more catches – Jimmy Graham, Tony Gonzalez, Jason Witten, Brandon Pettigrew, Kellen Winslow, and Fred Davis. But he’s made a great case to be considered as one of the best all around tight ends in the league.

Dallas will once again have their hands full with the Eagles offense this week. They will need to figure out a way to clog up the middle of the field otherwise Celek will have another big afternoon. So far this season each game Celek has a touchdown the Eagles have won which could prove to be a great barometer for how things end up on Saturday. During the last game against Dallas the Eagles used two-tight end sets with Celek and Clay Harbor on 32 of 70 offensive plays. LeSean McCcoy gained 104 of his 185 yards in that game out of the two-tight end set. I foresee Celek being a huge part of the game plan Saturday regardless if it’s in the blocking game or the receiving game.

“I don’t know. I mean, I haven’t even gone there”, Reid said. “I’m just focused on this. You don’t look back, that’s not what we’re doing at this point. You’re focusing in on the Dallas Cowboys; all of your energy goes into that football team and getting yourself prepared to play them.”

A typical coach Reid answer, none the less if the Jets beat the Giants in the battle of New York at 1 on Saturday all systems are go for Celek and company to make things interesting. I’m not so sure what will happen in that game but I do know the Eagles are a better team than Dallas in 2011. They already proved it once in October and with the play Celek already displayed in the first matchup along with his recent play I think he’ll have a big part in the outcome of Saturday’s showdown.

Will Reid’s Game Plan Be Built Around Vick Or McCoy This Week?

Celek has proved me wrong and has had a nice bounce back Season and he has really improved on his blocking and is really catching the ball like he used to a couple seasons back… He should be the “Comeback Player of the Team” this Seaon..

Ditto on that Paulman. I had Celek buried myself but he has made a nice run the last few weeks. Its still hard for me to believe what Baldinger and Ray Didninger have said this week. That after watching film that Celek is “hands down” the best all around TE in the NFL this year.

This guy really doesn’t get enough credit for what he brings to this team.