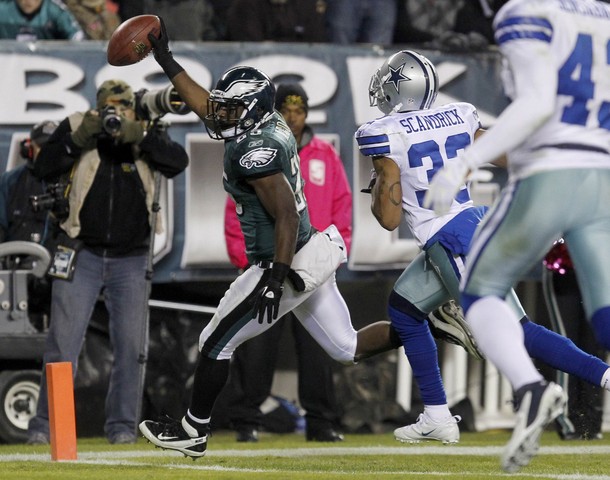 The last time the Eagles played Dallas, they gave hope to the fans that a season of disappointment was about to change for the better. They thoroughly dominated the Cowboys in a 34-7 rout at Lincoln Financial Field. The key for the Eagles offensively that night was the dominance of the running game.

LeSean McCoy rushed the ball a whopping 30 times for 185 yards and two touchdowns. Dallas had no answers for McCoy and the Eagles cruised. Unfortunately, the success achieved in that game didn’t carry over to the next week.  After beating the Cowboys, the Eagles lost at home to the Chicago Bears, and followed that up with a pathetic showing against the Arizona Cardinals.

Andy Reid doesn’t know why the big win against Dallas wasn’t a turning point for the team. “I don’t know. I mean, I haven’t even gone there. I’m just focused in on this,” said the Eagles head coach. “You don’t look back, that’s not worth doing at this point. You’re focusing in on the Dallas Cowboys; all of your energy goes into that football team and getting yourself prepared to play them.”

If you ask most Eagles fans why the first Dallas win didn’t translate into the turn around that was anticipated, they will probably respond that the Eagles stopped running the ball as much as they did that night. After giving the ball to McCoy on the ground 30 times against Dallas, Reid and company gave it to him a 30 times COMBINED the next two games.

Not surprisingly, the Eagles struggled offensively and were unable to get much needed wins. Now, with the season on the line, it’s paramount for the coaching staff to recognize McCoy as the bread and butter of the offense. The Cowboys certainly realize the explosiveness of Shady, and have set out to make stopping him their number one goal for Saturday’s game.  “He’s the best running back in the game right now, said linebacker Bradie James. “I didn’t know he was as good as he was until we got out there and started playing him. He’s the real deal. We have to bottle him up.”

Whether or not the Cowboys are successful in stopping McCoy remains to be seen, but the Eagles will get nowhere offensively if they don’t at least attempt to establish the run game. Simply trying to run the ball will open up the passing game for Michael Vick and could result in the Eagles taking advantage with passes over the middle like they did in the first matchup against Dallas as well as last week against the Jets.

Jerry Jones has admitted this week that he’s scared of the Eagles. If his Cowboys see the team they saw back on October 30th, he should be afraid. That night, the Eagles ran a balanced offensive attack and were able to thoroughly dismantle the Dallas defense. But none of that means anything this Saturday.

If Reid and Marty Mornhinweg go back to their pass happy ways, the Eagles could have trouble moving the ball and sustaining drives. At this point, with the Eagles needing an absolute miracle to win the NFC East, it would be sad to see this coaching staff try to do things that simply don’t work. What was built to be an explosive, quick strike offense, has proven to be more successful by simply keeping the ball on the ground.

It may not be the sexy, West Coast passing offense that Reid loves, but it works.  And in order for the Eagles to have any shot at pulling off the impossible in what has been a long, strange season, it’s the only way to go. Give the ball to your All-Pro running back and take it from there. It gives the Eagles their best chance to win, and if they had done it that way all season, they’d probably be in the driver’s seat of the division. As it is, they still need a whole lot to go their way to sneak into the playoffs. If they make the running game a priority this Saturday, they should be able to take care of the part they can at least control.

How Will Brent Celek Follow Up His Career Day Performance?