Christmas Gifts For Each Of The Flyers (Part 2) The Forwards 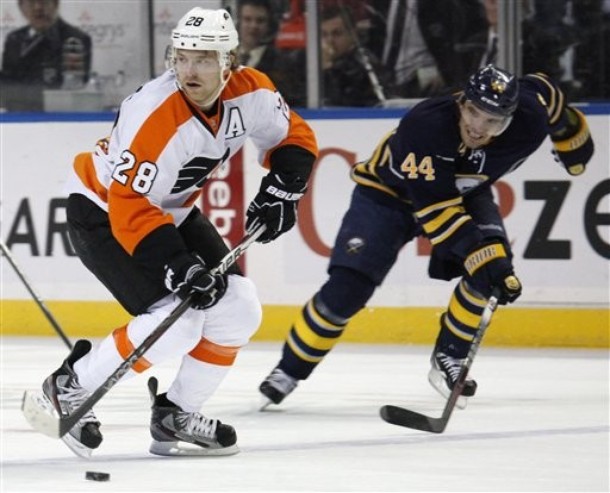 Danny Briere: Lots of fist pumps. The more Briere is scoring the better off the Flyers will be. Having multiple lines, in addition to the Giroux line, which always is scoring ( or so it seems) will give the Flyers great balance in the playoffs.

Claude Giroux: A Kevlar helmet. The Flyers need to keep him protected at all costs, especially his head after catching an errant Wayne Simmonds knee a few weeks ago.

Scott Hartnell: Ice time with Giroux. If he wasn’t on the first line with Giroux and Jagr, would he have 16 goals? #Hartnelldown

Jaromir Jagr: Health. As an aging 39 year old superstar, Jagr is key to the Flyers keeping calm under pressure. Jagr has won Stanley Cups and scored more goals than every other Flyer’s forward combined, or so it seems that way. If Laviolette can get him some rest late in games that aren’t close, and Jagr can stay healthy, he will keep up his scoring pace.

Matt Read: Jet-propelled skates. The kid can absolutely fly on the ice. His speed has certainly helped him on many of his 11 goals.

Zac Rinaldo: Patience. For the most part, Rinaldo hasn’t taken too many unnecessary penalties. However, as the season wears on and match-ups heat up, to keep the Flyers from having to kill too many penalties, Rinaldo will have to be careful from putting himself and the team in precarious situations.

Jody Shelley: A new team. As evidenced by the fact he has only played 13 games this year, Shelley doesn’t really fit in, especially with a more skilled Tom Sestito in the wings ( who was just sent to the Phantoms tonight). His cap space could be much better used on a potential defensive acquisition around the trade deadline.

Wayne Simmonds: Hustle. When Simmonds game is at its’ best, he’s flying around the ice hitting everything and battling for every loose puck. However, there are times he seems to get lazy out there.

Jakub Voracek: Hustle. While Giroux was out of the line-up, with the extra ice time we saw how dominant “Jake” could be. His combination of size and speed is awe-inspiring and if he keeps it up, he will be in line for a nice contract extension this off-season.

Harry Zolnierczyk: An easier last name to spell. Harry Z has been a great 4th line addition to the team with his speed.

James vanRiemsdyk: Confidence and hustle. While I don’t agree that JVR is a bust, that he is still developing as a power forward at the NHL level, the New Jersey native certainly needs to step his game up. If he is skating hard, and playing confident, like the playoffs last year against Boston.

Courturier: eyes in the back of his head