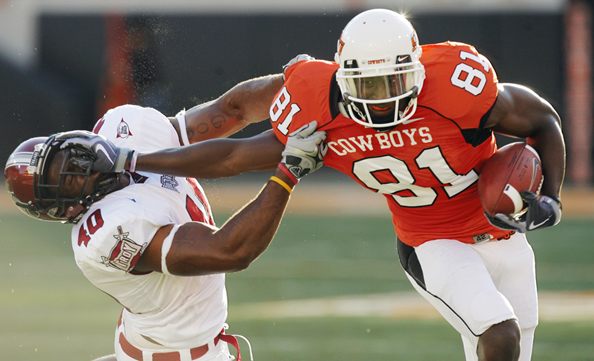 Regarding the Philadelphia Eagles:  There are two things the Birds need to do in order to improve their roster immediately.

First, find out what it will take to get back up linebacker Larry Grant away from San Francisco. This guy is an undiscovered gem. I will go as far as saying he is a can’t miss pro bowl Middle linebacker. If he wasn’t in back of Willis he would be a house hold name already.

Secondly: The Eagles should Franchise DeSean Jackson and package him in a trade with their 1st round pick to move up and get Oklahoma State Wide receiver Justin Blackmon. Jeremy Maclin is starting to develop into a #1 receiver like he was at Missouri and is just a flat out more important piece that Jackson.   Blackmon would come in and you would have a 1 and 1A. The team would be much more solid in both areas.

Another thing is clear. The New York Jets will never win with Mark Sanchez as their quarterback. He looks uncomfortable on every throw, whether it be screens or intermediate throws. He can’t even throw a deep ball. There are 8-10 starting quarterback’s in this league where you have no chance to win with them.

Christmas Gifts For Each Of The Flyers (Part 2) The Forwards