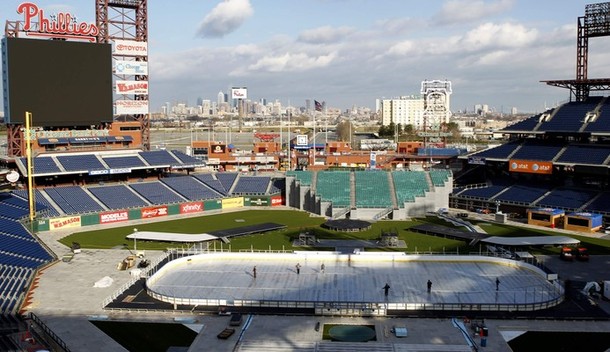 When the Boston Bruins hosted the Philadelphia Flyers in the 2010 NHL Winter Classic at Fenway Park, the organization capitalized on the opportunity by renting out the rink to other local high school and college teams.  It was a huge success, as the final game played on the ice between Boston University and Boston College was televised nationally on the NHL Network and seen live by a sold-out crowd of over 38,000.

Last August, it was announced that Boston had teamed with the Hockey East Association to recreate the Winter Classic atmosphere through an event called Frozen Fenway.

Once again, an outdoor rink will be built in Fenway Park and games will be hosted between various teams in the NCAA Division I Hockey league, including Boston University, Boston College, and Northeastern University.  Both men’s and women’s teams will play as well as local high school teams.  Free public skates for residents of Boston are currently on the schedule.

“Fenway Park has been hosting baseball games for nearly a hundred years now but over the past decade it has also hosted some memorable non-baseball events,” said Tom Caron of the New England Sports Network during this summer\’s Frozen Fenway announcement. “Outdoor hockey at that time two years ago was certainly not an original concept.  The Winter Classic had become one of the most popular days on the NHL calendar, but when Fenway was frozen in the final days of 2009, something magical happened here.  America’s most beloved ballpark quickly became New England’s favorite sheet of ice.”

It’s great to see Boston embracing its hockey culture and continuing a great outdoor tradition.  Never mind that NESN has taken the recreation a little too far with their own “version” of HBO’s “24/7” series; it’s not a slight to the Winter Classic for them to host future outdoor events.

Following in Boston’s footsteps, could Philadelphia support another outdoor hockey event in the future?

While there isn’t as large of a following for college hockey in the area, Penn State is looking to promote their advancement to a Division I Hockey program for the 2012-13 season.

La Salle and Malvern Prep both have very good high school hockey programs that have been well represented over the last decade at the “Flyers Cup,” an annual tournament hosted by the Flyers every year.

Ed Snider, chairman of the Flyers, has been trying to build a legacy for hockey as a vehicle for “not only teaching the merits of a healthy lifestyle, good sportsmanship, and the value of competition, but fundamental life lessons as well: the benefits of hard work, honest effort, commitment to common goals, and respect for colleagues and the rules of society.”  There is an opportunity here for the city and the ESYHF to further promote their respective goals and community growth.

What could be the easiest sell to host another series of outdoor hockey games is that Philadelphia will be hosting the NCAA Frozen Four competition in 2014 (one year after Pittsburgh hosts the event). To not link the two events together is a missed chance for national attention and media recognition.

Perhaps the most difficult hurdle in this discussion is the location.  The NHL and the Phillies spent an exorbitant amount of time negotiating the fee to use CBP, and a future program that is unlikely to make nearly as much money as the Winter Classic is a hard sell for a stadium that isn’t as deeply rooted in Philadelphia as Fenway Park is to Boston.

The Flyers may take a back seat to the Eagles and the Phillies, but the sport of hockey can still appreciate a bigger following in the City of Brotherly Love with the return of outdoor hockey in 2012 and beyond.

Eagles Put Together Solid Win Over Cowboys, But It’s Too Little, Too Late