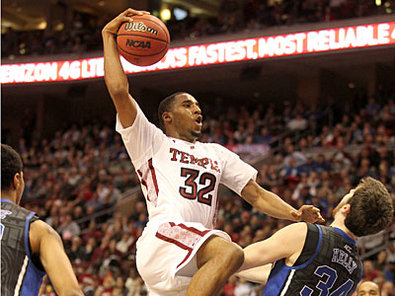 Khalif Wyatt’s 22 points’ helped Temple earn a 78-73 win over the Duke Blue Devils, its first win against Duke since 1996. The win also marked Temple’s first win in its history at the Well Fargo Center.

Most upsets can be credited to a few fluke moments and a little bit of luck that keep the underdog in the game, but on Wednesday night Temple’s guards dominated Duke. “[Temple] played with great toughness, great comradery, they just outplayed us tonight.”

Coach K told the Philadelphia Media. Duke never led in the second half and relinquished the lead for good on a Rahlir Hollis-Jefferson jumper at the 10:40 mark of the first half which put Temple up 18-17. As somebody who has watched every Temple Basketball game this season, Temple’s 78-73 shocked me.

Coming into the game Temple won its previous three games but were far from impressive in wins against inferior opponents. Temple escaped   Delaware (6-7) with a 66-63 win, and earned an 87-85 overtime win on a last second put back by freshman Anthony Lee versus Buffalo (6-4).

Temple’s inconsistent play wasn’t the only source of concern coming into Temple’s win over third ranked Duke. Temple was missing starting center Michael Eric who was averaging a double, double before injuring his right knee in late November. Eric is expected to return in late January which means the 10-3 Owls will only get better.

Duke struggled with Temple’s 6’4 guards which means come March when fans are filling out brackets if a team with decent sized guards crosses paths with Duke, it might be a good time to go for the upset selection in your bracket.

Temple begins Atlantic-10 play this Saturday at the Liacouras Center when they take on the Dayton Flyers at 4:00 pm. for Temple Basketball updates follow me on Twitter – JeryBrennan