Laviolettes Tenure in Philadelphia and the “24/7 Effect” 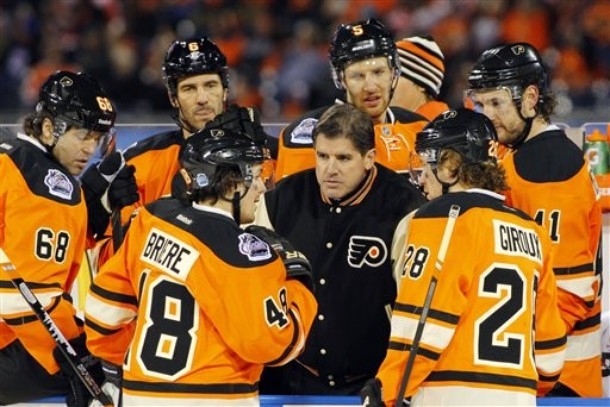 Peter Laviolette was fired as head coach of the Carolina Hurricanes in December 2008 shortly after becoming the winningest American-born NHL coach (a record which has since been captured by New York Rangers head coach John Tortorella).

Pierre LeBrun of ESPN wrote at the time,  “That old saying – ‘It’s easier to fire the head coach than 20 players’ – has never been more true. Cap-strapped teams in the post-lockout NHL don’t make any big transactions until the trade deadline, when contracts are easier to absorb. Before the lockout, a blockbuster deal might have been just as effective as firing your coach.”

Three years later and nothing has changed. Eleven weeks into the 2011-12 NHL season, six head coaches were fired after their respective teams got off to lukewarm starts. Four of those six teams still remain out of playoff spots, with the Anaheim Ducks currently neck-and-neck with the Columbus Blue Jackets for the #1 overall draft pick this summer.

Thankfully for Flyers fans, Laviolette remained available in 2009 when the team was sitting in 14th place in the Eastern Conference. Since his hiring, the Flyers have earned an impressive 99-58-21 record and made an appearance in the Stanley Cup Finals.

The main argument made for Laviolette’s firing in 2008 was that, despite having coached the only team in the Hurricanes’ history to win a Stanley Cup, the team had missed the playoffs two years in a row.

As coach of the Flyers, Laviolette has the advantage of manning a team backed by an organization with deep pockets. As long as he maintains the players’ respect and attention, he will always have the tools at his disposal to win.

Last year, CBCSports’ Hockey Night in Canada partnered with the NHLPA to conduct a player poll on a variety of topics regarding the league and the sport. For example, 98% of respondents wanted fighting to remain in the game while “none” received the most votes for “who is the best referee.”

When asked “Which coach would you most like to play for,” Dan Bylsma of the Pittsburgh Penguins received 21% of the votes as the clear victor, followed by Mike Babcock (Detroit Redwings, 18%) and Dave Tippett (Phoenix Coyotes, 9%). Bylsma was favored by NHL players despite coaching less than two full seasons and having won a Stanley Cup only after Michel Therrien had already taught the Penguins how to play good defense first.

What made Bylsma so appealing, then?

As a result of his appearance on the show “24/7”, Bylsma suddenly became a coach that players thought they’d like to play for.  This year, both Laviolette and Tortorella were seen extensively on the program as the cameras caught the two in private moments with both their teams and their families.

If the same poll was conducted this season, there is no doubt in my mind that Laviolette would earn high marks as well.  The effect of “24/7” is to present coaches as more than “another guy behind the bench.” What non-Quebecois player wasn’t thrilled when Laviolette screamed at the officials, “TYPICAL. MONTREAL TYPICAL” ? What player wasn’t touched when Tortorella’s supportive relationship with Liam Traynor, a 10-year-old with cerebral palsy, was revealed?

The effect of “24/7” is to present Peter Laviolette as a coach that people want to play for.  The value that he now adds to the Flyers’ brand is immeasurable.

There is no guarantee that Laviolette will become the longest tenured coach in Flyers history, an honor that currently goes to Fred Shero with 554 games coached between 1971 and 1978.  If he continues to coach the team successfully, he will at least be in a position to match another feat that only Shero has done with the Flyers too- win a Stanley Cup.

Steve Spagnuolo Is Contemplating His Future, As Reid Forms His Staff