The Sixers “Night-Shift” Bench Does The Job On The Pacers 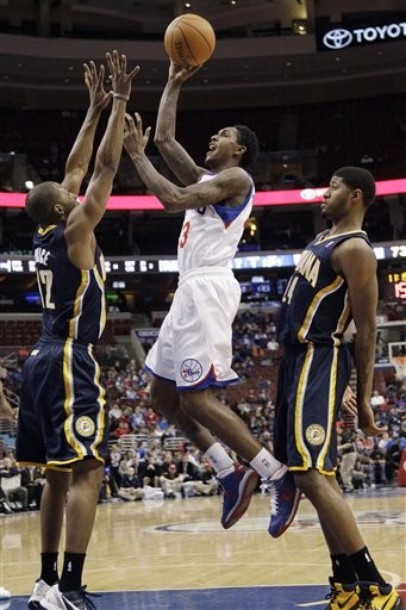 I was all ready for tonight’s game. I had my Sixers shirt on. Had my feet up and had my cheddar goldfish in hand. I swear I can eat goldfish until I puke. As the game starts to come on I notice right away that Wells Fargo is half-empty. That got me a little depressed.

This team deserves to have people watching from the stands cheering them on. They will come if the Sixers keep winning. They will definitely come. The Sixers started out slow again. That seems to be the theme so far this year. Shooting just 2-8 from the field in the early going but ending up having a 10-0 run late in the first quarter to lead after the first by a score of 25-20.

That lead was in large part because of their bench aka “The Night Shift’. Zumoff is awesome. The Pacers are a solid and physical team though. I had a feeling that this game was going to be a battle most of the night. It was pretty much back and fourth in the second quarter with the Sixers holding a 5 point lead at halftime. The Sixers turned the ball over 11 times in the first half that helped the Pacers stay around. The third quarter had both teams make runs at each other.

The Sixers had an 11-0 run to extend their lead to 14 points at one point but the Pacers answered right back. The Sixers defense was the difference once again in the fourth quarter along with them scoring on their last four possessions to close out the game for a victory of 96-86 over the Pacers. The Pacers only shot 36% for the game. The Sixers also won the rebounding column with a 49-44 advantage over the Pacers. The Sixers came into the game as the number one defense in the league and all they did was make sure they stayed there. Here are some of the things that I saw…

-“The Night Shift’ was flat-out the difference tonight. When the Sixers started slow in the first quarter Doug Collins looked to his bench a little earlier than usually and they responded right away. The Sixers bench out scored the Pacers bench by 41-27.

– Nikola Vucevic. Vuc easily had his best game as a pro. Like I said before when the team needed a lift in the first quarter he was one of the main guys that stepped up. He was rebounding and finishing at the rim. He even stepped out and knocked down a three with ease. He gave the Sixers very solid minutes tonight, especially with Hawes not being 100%. He really stepped up. He finished with 11 points and 8 rebounds. BOOM.

– Jrue Holiday. I thought early on Holiday was trying to do too much against his former college teammate in Collison. He was 1-7 from the field and had 4 turnovers at half. In the fourth quarter he did knock down a couple of big shots to finish off the Pacers though. He ended up having 12 points and 2 assists.

– Thaddeus Young . Man he was flat out awesome tonight. The Sixers as team took 6 charges tonight. Thad took 4 of them. He was everywhere tonight. He really does just bring so much energy to this team. All honesty Thad’s  jumper has been looking better of late.

– Andre Iguodala. He had a very solid floor game tonight. He had 20 points 9 rebounds and 5 assists. He played good “D’ all night long. He seemed to settle the game when it needed to be settled. He is shooting below 70% from the charity strip though.  Sorry Andre, I had to take a little shot. I am just messing around. A very solid outing by Iggy.

-Hibbert. The dude has become a beast down low. I did not realize how good his hands are and he has a very nice touch around the rim. He also has solid foot work as well for a big guy. He finished with 19 points and 8 rebounds.

-Hansbrough. I swear just looking at the guy I want to smack the hell out of him. He seems to be in the middle of all the action when he is in there. He is flopping around or banging up against someone the whole time. He is annoying as hell. You know what that means. He is doing his job. Still want to sock him though.

-George. This kid can do little bit of everything out there. He can shoot the ball, run the floor and seems like a pretty solid defender. He has a lot of tools and he is only 21 years old. He did only shoot 4-16 from the field but you can see the potential. He finished with 13 points 7 rebounds and 5 assists.

-Collison. He had a quiet night. The only thing I can remember him doing was crossing-over Lou Williams in the first half. Sorry Lou, but he did. He finished with 8 points and 4 assists.

I know that Granger missed the game with food poisoning but the Pacers are still solid team even without him in there. The Pacers are very physical down low. It was good to see the Sixers match that. Looking like the Pacers and the Sixers are going to be the surprising teams this year in the Eastern Conference. That won’t be the last time we do battle with them. That is FIVE wins in row now! Bring on Tyreke and the Kings! Here is the box score and the recap

Report: Spagnuolo To Be Back With The Eagles This Week

They’ll smoke the Kings.Nice write up bro.Thads jumper is coming aroung and i really like the was Iggs is getting after the basket.

Thad Young …..YES…the man should really get consideration for All-Defensive team in the NBA this year.

I love the way Collins has them playing!!

I was also disappointed when I seen the empty seats. That will all change as they continue to win. I love how Doug Collins has them playing defense, this is something that the players gave up in the NBA they got away from, it will win you games just as much as offense. Keep playing hard and good things will come your way.

Word from Indy sources was that both SF Granger and SG George Hill (their best shooter off the bench who did not play) both got in the Coaches Dog House for violating Team Curfew after enjoying the Phuilly night life a little too much which is the reason they did not play, but hey, great win never the less.. ..

Thanks Erock. Dude, I will have to try those Sniders nibblers. LOL. Thanks for checking out the article fellas!

Joe, how has the home attendance beenso far this Season…
Keep up the good analysis and recaps and keep us pumped about the 76ers.. It’s been a while since the 76ers has received consistent attention and I appreaciate the info since I live in NC and don’t read the local papers or listen to Philly Talk Radio

I failed to mention how about the combined states from Centers Hawes and Vulceric the last couple of games.. .Almost 30 points and 20 Rebounds a night from the Center Position between these guys … Yowsa..

Where does Jodie Meeks fit in this offense? I see him as more of a problem than Iguodala is. If his job is to pull up on those swing pass open three pointers then he just a waste of space because he is a below average 3 point shooter. I think it would benefit us more if our starting lineup had Lou Williams in it. Those slow starts would start off with way more offense in my opinion.

Paulman 8500 attended the game 12000 empty seats. See the problem with Indiana, Toronto, and Detroit is the most recognizable name is Tyler Hansbrough from UNC thats the NBA today. Throw in Utah, Golden State and New Orleans and most fans cant name 3 starters on any of them teams. Theres about 15 other teams in the same situation and obviously since 8500 was the attendance I guess many agree with me. Remember the days when Mark Price came in one night then Shawn Kemp. Then Barkley then Drexler then Ewing and the next night Stockton and Malone? Oh my Reggie Miller is in town, oh shit David Robinson tonight. . I didnt even have to mention the big 3 Boston. LA and Chicago. Remember them days? What do you think when the Sixers go to other cities happens? They go oh Igudala and Brand are coming they both make 20 million a year. Must be studs. Oh shit they avg 8 points a game. People got the nerve to pinch DJax. lol comical.

I hear you.. I know that the Health, Human Services Folks were never happy to see Shawn Kemp come to town if you know what I mean… thnx for info…

I do like the Sixers 2nd team. Lou Williams and Thadeus Young are definetly the Sixers best players. Chocolate Thunder Darryl Dawkins in the house tonight!