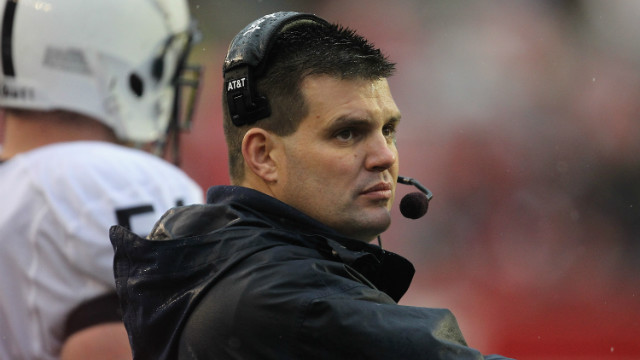 Joe Paterno’s son, Jay, who was the quarterbacks’ coach for the Nittany Lions has decided that he leaving the university and the coach position.  Paterno had been on his father Joe’s staff for the last 17 years.

It wasn’t totally his decision alone, but Paterno says it was a decision that he and new Penn State head coach Bill O’Brien agreed upon.

I saw Jay make a comment on television the other day.  He said his Dad’s was focused on his battle with cancer, which has helped he (the older Paterno) deal with this whole scandal.

Jay Paterno wrote the following on his blog.

“After talking with Coach Bill O’Brien we have reached the conclusion that I will not be a part of the Penn State football staff moving forward.

I will spend the next few weeks consulting with my wife and family to weigh various future options both inside and outside of football.

I thank the student-athletes that I’ve been privileged to coach over the past two decades at four schools. Hopefully my career has had an impact and helped you learn about life, and about the commitment and passion it takes to pursue personal excellence.

As for Penn Staters, I cannot even begin to express what your support has meant to me and my family over the past seventeen seasons and in particular the past two months. Through the tumult of the past several weeks, it has been your stalwart support combined with life lessons learned from Joe Paterno that has and continue to sustain us.

As a Penn Stater I am reminded of the words “Sing Our Love and Loyalty” from the Alma Mater. I wish the program the best of luck in carrying on the academic and athletic excellence that have been a hallmark of this university for decades.

Advice To DeSean Jackson; No More Pictures With Strippers