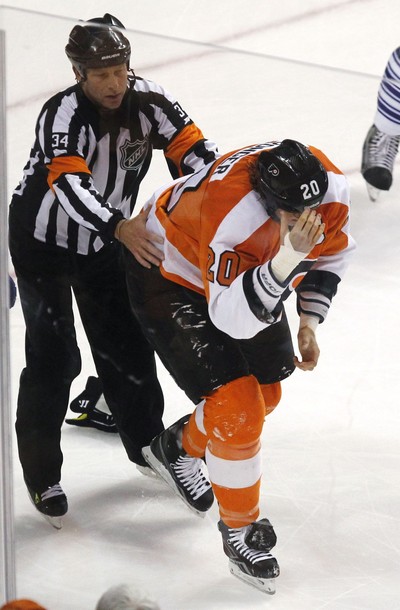 The Philadelphia Flyers are halfway through what has been an injury-filled season.  The Orange and Black are second in the Atlantic division, just four points behind their rival, New York Rangers.

One of the reasons the team is where they are at in the standings is because of the play of Claude Giroux.  He is second in the National Hockey League in scoring with 48 points.  Coach Peter Laviolette uses Giroux in just about every situation possible on the ice.

Scott Hartnell struggled in the beginning of the season so Laviolette decided to put him on a line with Giroux and Jaromir Jagr.  The line and Hartnell soon took off, and he has 18 goals, 19 assists and a total of 37 points in 41 games played, but the most surprising statistic is his plus/minus number.  Hartnell is a plus 19, which means he is also playing a responsible defensive game in the defensive zone or just getting off the ice before the other team scores.

The Orange and Black have also gotten major contributions from their rookies whether scoring points or just knowing when to drop the gloves to change the momentum of a game.  The Flyers rookies are making the most of their time with the big club by scoring a total of 56 points.  The biggest offensive contributor has been Matt Read with a total of 25 points.  He also plays on both the penalty kill and the power play and is one of the most versatile players on the team.  Read can play just about any position on the ice, including playing the point on the power play.

Sean Couturier is another rookie who has contributed big this season.  He is the team’s fourth line center, who is responsible in the defensive zone.  Couturier is also one of the regulars on the penalty kill unit.  He started off the season slow on the offensive side, but has picked it up since coming off of his injury.  Even Marc-Andre Bourdon has played well since his call up.  He’s no Chris Pronger out there, but he’s doing a decent enough job filling in.

Ilya Bryzgalov has been the biggest disappointment of the season so far.  The Flyers thought there were getting a steady number one goalie when they signed him instead all they’ve seen so far is an inconsistent goalie.  The defense hasn’t played

that well in front of him at times and there have been a lot of shots deflected by him by his own players, but he just hasn’t come up with that big save when it’s been needed.

James van Riemsdyk is another disappointment this season.  The Orange and Black signed him to a new deal over the summer based on his playoff performance last year and he hasn’t lived up to that contract so far this year.  He has picked it up of late and is getting back to looking like the player he was last season in the playoffs.  Van Riemsdyk finally has consistent line mates in Brayden Schenn and Wayne  Simmonds whereas earlier in the season he kept getting moved around to different lines.  Another reason for the slow start may be because he could be trying to play through a hip injury.

The Flyers have probably exceeded most people’s expectations but let’s see if they can get even better in the second half with some solid defense and goaltending.