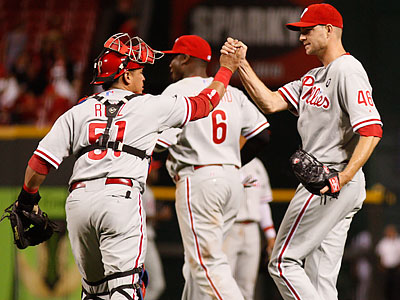 Last year’s Phillies closer Ryan Madson has agreed to a one-year $8.5 million dollar deal with the Cincinnati Reds.  Madson, who was on the free agent market much longer than anyone could have anticipated, will use this next season to prove to clubs around the league that his success in 2011 as a closer wasn’t an accident.

He had a big-time season last year with 32 saves out of 34 chances with a 2.37 ERA.  If he does it again, I think he’ll get the money he wants on the free agent market.

His agent Scott Boras must have overestimated what he could get on the open market.  From what I’m told, the Phillies were willing to sign him to a long-term deal, but they weren’t happy with the number Boras had approached them with.

Close Up On Niners-Saints Game And The Pick

Good luck with a wild-card Ryan.Boras screwed him….he coulda had a deal and been the closer for the Phills had he not had that maniac rep’n him.Oh well.

Reds over the Phils in next years WIld-Card Round 3 games to 2
Madson collects 3 saves and strikes out R Howard to end every game and is named Series MVP…
Meanwhile Papelbust blows 2 saves and ends up with an ERA of 7 + for the Series and is heckled and booed which causing him to request a trade after the 2012 Series, Phils end up eating about $20 Million of his Deal and ship him out to west to the Dodgers for 2 AA Prospects….
Phils Franchise is never the same again and fails to reach the Playoffs
until the year 2021