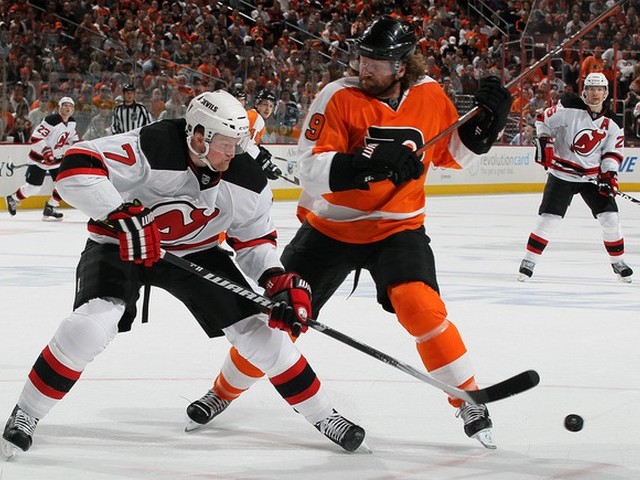 Early this season, Scott Hartnell was struggling. In his first 7 games, he only managed 0 goals and 2 assists, often looking out of place. Some games he was even dropped to the 4th line, averaging less than 10 minutes of ice time per game. Rumors began to swirl that the Flyer’s were looking to move him or that he might not even be in the line up.

Then, maybe one of the biggest Flyer surprises of the season occured. He was paired with Claude Giroux and Jaromir Jagr. When I saw the line combinations for that game against the Maple Leafs on October 24th (coincidentally the night that started Chris Pronger’s head injury) I thought that Coach Laviolette must be crazy.

Hartnell responded with 2 goals and 1 assist and has taken off since then, with 18 goals and 19 assists in 40 games. Anyone who plays with Giroux and Jagr will almost certainly see an increase in their offensive numbers, but Hartnell has done more than just gotten some lucky bounces because of his linemates.

Hartnell’s propensity for falling on the ice, whether it be on purpose or not is still true, and very popular with t-shirts and storming the twitter world, but his hustle and grit provide space for his two Superstar linemates to get to open spaces on the ice. His +19 shows that he has been responsible in the defensive zone, limiting some of those boneheaded plays he had been committing in the past. Hartnell knows exactly what his role on this team is, and executes that perfectly.

It would only be right for the NHL to select him as one of the All-stars for the 2011-2012 season as he has taken his game to another level in the first half of the season. Would I be shocked if he were left off the team? Nope, he is one of those guys that is probably not too well liked around the league or in the league front offices, outside of Philadelphia. However, it would be a travesty to see Hartnell not there and another forward with a better reputation but not having as good of a season.

Advice To DeSean Jackson; No More Pictures With Strippers