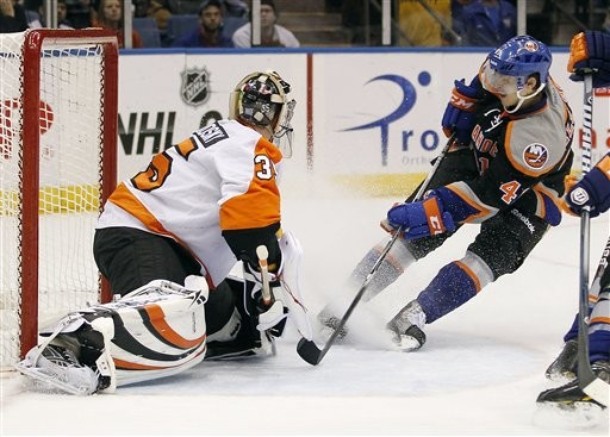 The New York Islanders have been the Flyers’ whipping boy for years, but earning that win has rarely been easy. Dating back to last season, 5 of the last 7 games played between the two Atlantic Division rivals have been won by just one goal.  Tonight was no different, as the Flyers collected another two points in spite of inconsistent play between the defense and the forwards.

Sergei Bobrovsky was, much like in Carolina, the deciding factor. On CSNPhilly after the game, Andrej Meszaros stated Bobrovsky was “unbelievable,” and that’s about as apt a word as one could find to describe his game.

Making 33 saves on 35 shots, including a penalty shot attempt from Michael Grabner, Bob kept the Flyers in the game. He is now ranked 20th in the NHL in goals-against-average for goalies who have played in 10 games or more as well as 25th in goals-allowed-per-60-minutes. Ilya Bryzgalov is 45th and 49th in both categories, respectively.

Many suspect Bobrovsky will start in Saturday’s game against the Nashville Predators. Why wouldn’t you?

Among the forwards, Scott Hartnell, Wayne Simmonds and Sean Couturier scored for the orange and black. Simmonds’ goal was a bit of a fluke, as he banked the puck off the back of the Islanders goaltender Evgeni Nabokov’s leg from behind the net, but it just goes to show how important it is to keep firing the puck at all times. Fluky goals are part of the game.

Couturier closed the door on an Islanders comeback with 1:30 remaining in the game, going top shelf on Nabokov. Peter Laviolette should consider moving him to the top line in place of Jaromir Jagr, whose age has appeared to be catching up with him lately.  It’s not that Jags doesn’t have the vision or skill to still compete- I think he has been a great signing this season- but 42 games into the season, he appears to be more than a step slower than he was in September. The on-and-off groin injuries certainly haven’t helped.

The Flyers are now within just two points of the New York Rangers, thanks to Jason Spezza and Milan Michalek of the Ottawa Senators dominating the Blueshirts tonight.  Hopefully the fans who complained about the ballot-stuffing that allowed for Spezza and Michalek to make the 2012 NHL All-Star Game over guys like Hartnell will forgive them.

The Sixers Play Basketball The Old Fashioned Way – As A Team

Good old fashioned goalie controversy. Same old, same old. Why can’t we ever get the goalie situation right!? I don’t get it! What makes it even worse is Laviolette’s impatience with the goalies. Last years goalie revolving door was a disgrace, & you would think he learned. Give the Bryz time to work it out, or just bench him for a couple of weeks.

I would Play “Bobs’ for a whlie and let Bryz work on his game and get ready for the stretch run, but if “Bobs” continues to play very well, I would stick with him and worry about “Bryz’ hurt feelings or disappointig performance for after the Season.. The Flyers will need both of these Goalies the way Coach Lav pulls and checnges them up…

Bryz needs to go to the Phantoms to work out his issues. The Flyers don’t have the luxury of giving him 10 straight starts to figure it out. They would probably lose 6-7 of those games with how shaky he has been and with the defensive lapses.

dcar I agree completely, laviolette is a goalie killer, he rides the hot hand, but the goalie knows he’s one bad game away from the bench, there’s a reason the goaltending is suspect and its the coach, and he also is over the top intense, burns team out, and they are not physical enough, tough enough to beat the rangers

paulman your list again proves your lacking knowledge, disdain for Phillies, you can make an argument that Howard is overpaid, but compared to who, but to put him on any list like that is a joke

A lot of hate this Friday morning, it must be due to being Friday the 13th…
I think most Baseball Observors would agree and state that Howard is overpaid…Is he in the same class at Puljos.. Absolutely not…
Is he on par with other Top 1B like Yandees M Texiera, Red Soz Gonzales, Brewers Fielder or Reds J Votto .. I still say no…
I do admit that I am jumping the gun on Papelbon who may turn out to pitch great, I just don’t think he was worth a $50 Million and though he is still relatively young, I believe his best years are behind him as he started young and a has pitched a lot of innings already in his career… time will tell with this one but 1 thing I am 100% sure on, he better get off to a good starts for he does not take to being booed too well and think his “thin skin” and “pouty attitude” will not go over real well is he struggles early in his Phillie Career

Ha, I love Friday the 13th. 13’s my lucky # and I love to take the underdog and bunk stupid myths.

But Paul, the hate came from you – ‘top 6 worst sports signings in the WORLD’ are all by Philly teams? And this from a guy not living in philly, known to post stuff just to piss others off…..

Ha, there’s blatant hate from you right there…

I didn’t like any of the signings to be honest with you, and had to rub it in a little.. There are teams in every sport who make bad signings every season..
I just pointed these particualr one’s out for I feel they will hamper my Hometown Teams as time goes on where these players become untradeable and in esscent, the Teams get stuck with them or have to release them and get nothing in return…

Hardly think Laviolette is the problem with Bryz. Dude got a boatload of money, so now earn it. I think that he would like nothing more than to stick with one guy, but when you are loaded with the goalie talent that they have had… Bouche, Leighton, Bob, Bryz… not a lot of options there.As far as being intense, he seems to be getting a lot from his players this year considering their youth and the amount of injuries that they have had. Dude won a cup, so I think that I will take his ideas over any of yours.