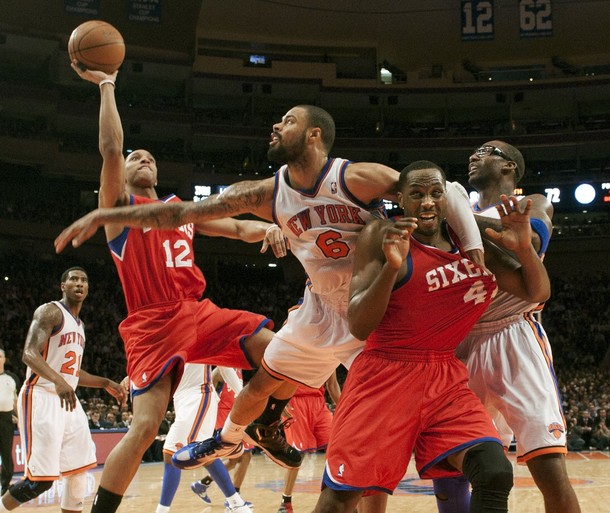 The anticipation was killing me for this game.  This was the game to see where the Sixers stood to show the people that they are for real.  It didn’t go the way I was hoping but they did not go down without a fight.

By the way did you see the starting lineups cards before the game? Umm, Jrue Holiday was looking a lot like Landry Fields. Nice. Spencer was out with a lower back strain. Tony Battie the veteran statesman got the start. The Sixers started slow once again with the Knicks hitting 10 of their first 15 shots.

The Sixers found them selves down 28-15 after the first quarter. I should just copy and paste that every time “the Sixers start slow”. Sixers were playing their fifth game in six nights. They fought back a few times. This team never goes down quietly. The Knicks had a 20-3 run in between the third and fourth quarter to put them up 17 in the fourth. That is when the Sixers made one more run but came up short with 85-79 loss to the Knicks. I hate saying this but the Knicks won because of their defense. The Knicks shot 41% from the field and the Sixers shot 39%.  Here are some of the things I saw…

-Lou Williams. I read in one of the post game reports that Lou thought the game was starting at 7 not at 7 30. So that is what happened to him. I was wondering why Lou looked completely lost last night. He was out of it all night. He shot 1-6 for only 2 points.

-Iggy. I actually thought that he had a solid game. Listen, Anthony is a great scorer and Iggy was going one on one with him all night long. Other than that one stretch where he and Anthony both received a technical foul I thought Iggy did a solid job on him. He held Melo to shooting 9-24 from the field. Iggy had 16 points 6 rebounds and 4 steals.                          -Turner. He was one of the best Sixers all night long. He was the only one not settling for the jumper. Him and Thad were the one’s leading the charge in the fourth quarter come back try. You can see him gaining more and more confidence every game.

-Sixers offense. I never thought I would say this but the Sixers missed Hawes last night especially on the offensive end. They like to use him as a filter for their offense in the high post. Running back door cuts and using him in the pick roll situations. The Sixers settled for jumpers most of the night and never could get into a rhythm.

-Melo. He was hot early and had that one stretch like I said before. Though overall the Sixers did a solid job against him. He had 27 points but need 24 shots to get them. I thought in 4th quarter he was one of the reasons why the Sixers got back in the game. He seemed more about trying to take Iggy one on one then trying to close out the game. He all most paid for it.  He took a lot of bad shots in the fourth.

-Harrellson. Man, this dude was annoying as hell. Every time the Sixers started to gain some momentum he would knock down a shot. Well they know now not to leave him open anymore. Just make him put the ball on the floor. He had 13 points on 5-10 from the field including three triples.

-Amare. He ended up having 20 points and 10 rebounds but I thought the Knicks did not do a good enough job of keeping him involved in the game. He just seemed to be standing around at times. Maybe that’s why you have seen his names pop up in trade rumors for them.

-Knicks defense. I hate talking about this but that was the reason why they won. They made the Sixers settle for jumpers all night long. Thanks to Chandler lurking around. They rebounded well so the Sixers could not get out and run. They out rebound the Sixers 46-37. I like to dog the Knicks about their defense but they made me like stupid in this game. Well at least for this game they did.

If Grigson Was Such A Great Talent Evaluator, What’s Wrong With Our Drafting

Just stop it right there that was there third straight game and they hung in there I guess you were thinking they was gonna win every game.

Turk my man never thought they are going to win every game. Never said that either. Just giving you what I think game by game. Sixers played tough like they always do. Just did not have enough. I guess implied something else to you. It is all good though. Thanks for checking out my article

Sorry for being so hyped my anger wasn’t directed towards you just some media people won’t even give them a chance. I’m also disappointed that this site didn’t do a write up on the BCS Championship game after it was over.

Dude its all good bro. Stay hyped man! I love the passion! I do not take anything personal my man! Again thanks for reading. I agree people need to notice this team.

I know Coach said “tired legs” are not an excuse, and 3 games straight isn’t one either. He is completely correct, and could not say anything else. But everybody has an off night, and when this team shoots this poorly, I am willing to bet their legs were shot. No base of support, no jumper. They’ll be alright

Listen, when the reality of this good start, inevitably wears off, all of the band-wagoners will be back in hiding. The reality here is, we have gotten off to a good start due to the team being the same as the end of last year. In turn this is going to be the downfall, because the team made no changes to make this team better, & we are still the same mediocre team that we had last year. The same problems still exist, we still have Iggy, Brand, too much youth, & no star power. 5 of the wins we have this year, have been against teams without their best players. So let’s be real, although they are a fun team to watch, & the new owners are trying to make the experience at the venue more fun, they are a mediocre team, that has ZERO chance of winning a Championship anytime soon, thus the reason they are not selling tickets at Wells Fargo. Let’s face it, it is fun to watch the Phanatic, & the Bank is a beautiful, fun venue to spend a night, but if the Phils weren’t winning like the 76er’s, they would be empty too, just like the 90’s were. Consistent, realistic, competing, for winning a Championship, is all that matters. No excuses, or delusions. Since when we’ve lowered our expectations for having a chance. Yeah I have a chance to win the Powerball, but realistically it is near impossible. Be real peeps!

They needed to fully rebuild 2 years ago. When they had a chance to trade Iggy on three separate occasions, especially for Stoudamire, & they didn’t & re-signed him to his asinine contract, that turned me against them, & I don’t like this team. I won’t Iggy gone, so Thadd & Turner get the minutes, chemistry & time to get a lot better. Brand is un-tradeable, with his horrendous contract. He should have been bought out with the salary exception. Another idiotic mistake. They didn’t even use it on Noscioni, who is wasting $$$ on the bench getting splinters in his @$$. Ridiculous!!!!!!!

They were just gassed in this game. Unfortunate scheduling here.